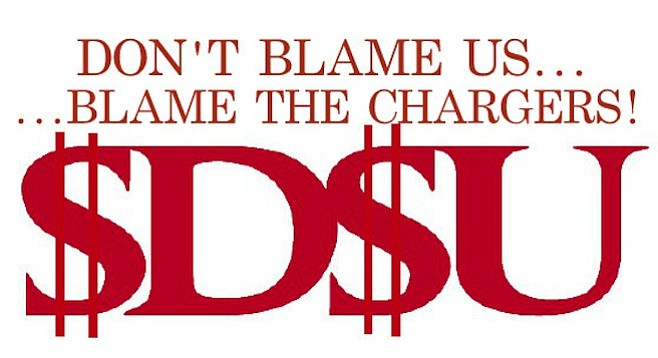 The Citizens' Stadium Advisory Group report on the new Chargers stadium includes a plan to increase the San Diego State University Aztecs' rent for use of the facility from $500,000 per year to $1.25 million per year.

"That's a lot of money," says San Diego State spokesman Greg Blockhead. "That's, like, more than double. Fortunately, the CSAG report also contains lots of good ideas about opening up new and exciting revenue streams. It says the Chargers can raise millions of dollars just by placing small surcharges on things like tickets and parking spaces.

"We looked at our own program, and determined that what people really want out of their college education is a diploma. How else are they going to get a job? So, if the rent hike becomes a reality, our plan is to add a $100 surcharge on every diploma we issue. Who knows? We might add it regardless! After four or five years at State, what are you gonna do, not pay?"

How about charging companies who request a college transcript before hiring? It would be a $100 fee for the "real" transcript. But if the graduate wants a "much better version" of their transcript sent out, the grad would pay a "service fee" of $2000. Hey, anything to get that job, right?

With something like 7-8,000 degree recipients a year, the $100 diploma service charge would bring in a nice chunk of change. $800,000 every year isn't to be sneezed at. I think Mencken is on to something, especially in the "fee state" of California, where everything has or will have a fee.

Why not have pay toilets at the stadium (payable via credit card like our parking meters)? Wouldn't you pay a buck after drinking 3-4 beers?