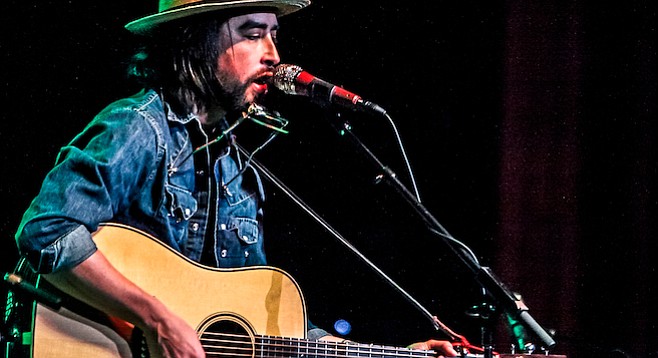 With his fingers flying over the neck of his guitar and his voice effortlessly reaching every note, Greene filled his 90-minute set with alternating takes on the blues, Americana, and country, appealing to listeners of all tastes. On tour with his new group, the Jackie Greene Band, Greene sampled tunes throughout his solo repertoire, diving into fan favorites “Don’t Let the Devil Take Your Mind” and “Medicine.”

After telling the crowd about his forthcoming album, expected out this summer, Greene tossed two new tracks into the set, watching as fans listened attentively and bobbed their heads to the unfamiliar melodies.

The fast-paced evening ended with an instrumental jam for an encore as Greene, a recurring member of Phil Lesh’s touring band, revealed his Grateful Dead influences and took “Sugaree” for a spin.

Throughout the performance, Greene displayed his multi-instrumentalist side as he breathed life into his harmonica, surged along the keyboard, and swapped between his electric, acoustic, and resonator guitars. Judging by the thunderous applause that followed Greene as he left the stage, his fans would’ve been happy to hear him play all night long.