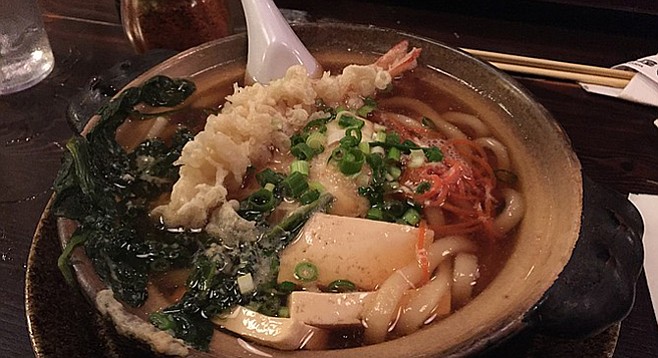 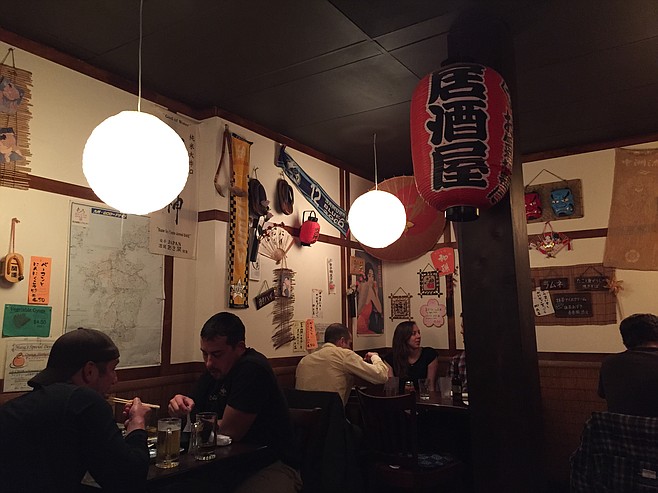 Inside one of the two dining rooms at Izakaya Masa

Aside from the brilliant and fleeting cherry blossom season, the one thing that makes a Japanophile’s heart warble is an awesome izakaya (the Japanese gastropub). Izakaya Masa in Mission Hills is our favorite izakaya in all of Southern California. But not for ramen. Masa’s ramen is pretty standard; when I’m craving ramen, I can easily find an equal-to-or-better version of the stuff at Tajima or Yakyudori. To me, ordering ramen at Masa would be like ordering the frankfurter at S&M Sausage and Meat. Sure, you’re going to get a good hotdog, but where else can you taste alligator and antelope sausage? If a place specializes in something rare that is also awesome, I don’t order the hot dog. When I pass through those noren (fabric doors) and am transported to a space reminiscent of izakayas in Shinjuku, I gravitate toward the kind of things I can’t get anywhere else in San Diego. 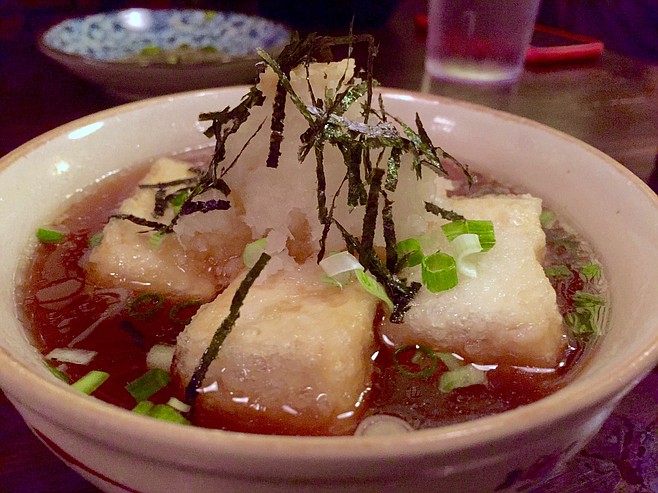 Agedashi Tofu, a great way to begin your meal at Masa

One such item is the Agedashi Tofu — yeah, yeah, I know there are a few other kitchens in town that make great agedashi, but on the whole, those tend to be more pricey, and this one is not only my ideal version (along with Sushi Tadokoro’s), it’s also only $4.95. David and I usually begin our meals at Masa by sharing this golden fried tofu swimming in a savory, umami soup comprising dashi, mirin, and soy sauce, all capped with a pile of grated mountain yam and nori confetti. 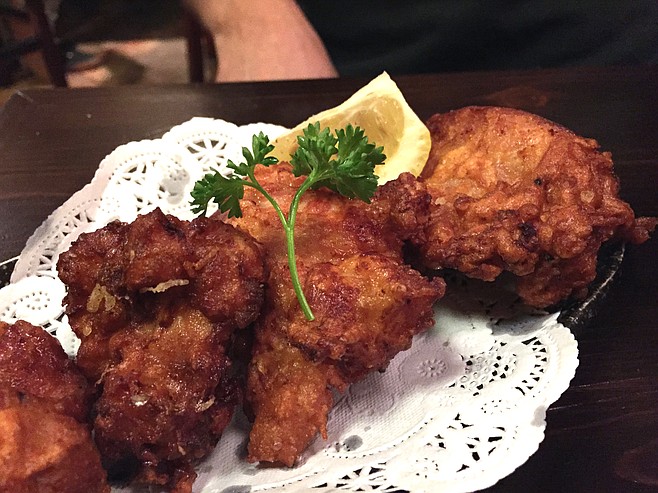 A more indulgent appetizer is the Masa’s Fried Chicken ($5.95). Given the menu is awash in Romanji, I’m surprised this item didn’t appear as Karaage, as Masa’s version is definitive of the traditional karaage method of marinating the meat morsels in a garlic and soy sauce blend before frying. I have an affinity for sauces in general, but I’d be loath to add a drop of anything to these savory flavor/texture bombs.

The reason David has now insisted on a once a week visit to Masa is their Ten-Zaru Soba ($11.95). He’s been on a soba noodle kick lately. Here his tempura accompaniment to the otherwise simple and elegant dish of cold buckwheat noodles includes not only shrimp, but also squash, potato, broccoli, and even a shiso leaf. 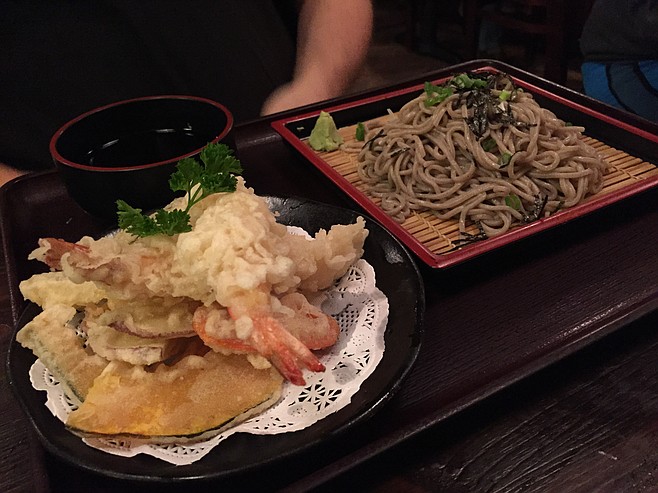 On the noodle front, my go-to at Masa is the Nabeyaki Udon ($9.95). Thick, chewy udon noodles are submerged in a boiling hot dashi broth, served in the same nabe, or metal pot in which it was cooked. Nabeyaki versions vary, but they all typically include an egg soft-cooked in the boiling broth and tempura shrimp. Masa’s version adds spinach, tofu, thinly sliced carrots, and green onion. And of course, I spice it up with several shakes of shichimi, which is brought to the table along with the dish. 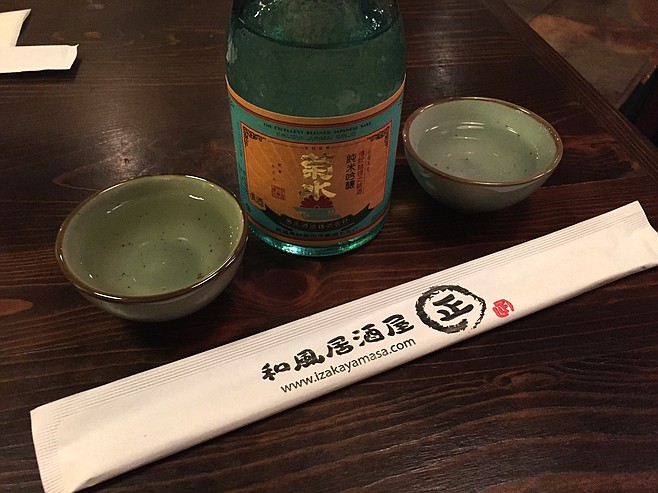 For drinks, we order off the special menu, which doesn’t seem to change much. After tasting our way through most of them, we settled on a usual, and that’s the Funaguchi Kikusui Nama-Sake (aged one year), which arrives in an aluminum can. This protects it from the damaging effects of light and air (careful when you open them, they’re filled to the brim). This sake seems to have more character than the same brand’s Junmai Ginjo, which is easy drinking, but falls on the overly innocuous end of the spectrum. 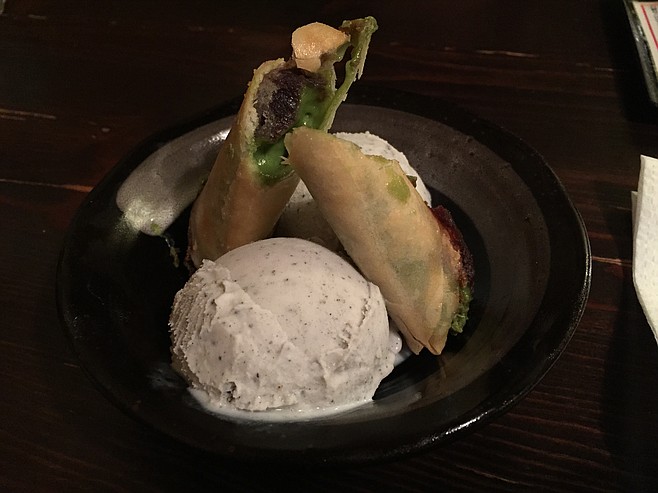 I enjoy the subdued sweetness of Japanese desserts. Only once have we saved room for any here (the night we tried their sushi, which is interesting, fresh, and tasty, but the pieces were hilariously huge). Not on the menu, but affixed to a wall in one room that we happened to sit by one night was the sweet offering of spring rolls with ice cream. The green tea and red bean center of the spring rolls were lava hot. Fortunately, we had cool, satisfying black sesame ice cream to soothe our burnt tongues. And after a few bites, we forgot all about the pain and relished the sweet and earthy flavors.