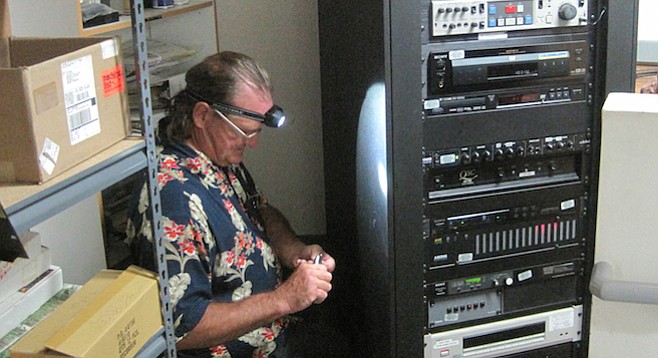 A new message greeted parishioners entering St. Dunstan Episcopal Church for the 8 a.m. service on June 28. A sign advised people to "Get in the Hearing Loop" by turning hearing aids and cochlear implants to the T-coil (telecoil) setting. 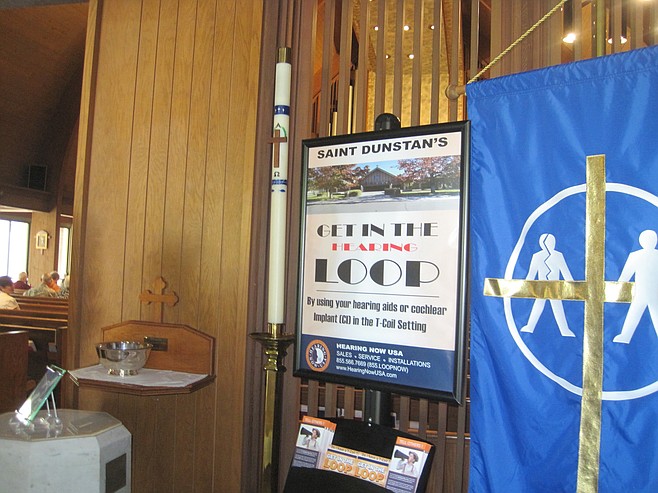 The loop refers to an audio-induction loop system. A loop of wire installed in a building creates a magnetic field, Richard Archbold said on June 23. He and Warren Willard own Hearing Now USA., a business that installs and services hearing loops.

Wire is connected to a loop amplifier, and the T-coil receives a signal from the loop and converts it into sound. Archbold said the process "cuts out" reverberations and most background noises. He installed loops at St. Dunstan on June 22 and in the Mission Trails Regional Park visitor center theater the next day.

Hearing Now's loopings include San Diego State University's audiology center, and these Catholic churches: St. Mary, Star of the Sea in Oceanside; and (in San Diego) St. John the Evangelist, St. Didacus, and Blessed Sacrament. Archbold said he looped St. Didacus's confessional separately so "sound doesn't spill over" into the church. He added, "We're in talks" about looping the San Diego Civic and Balboa theaters.

Indication of a looped site

Signs at looped sites contain the graphic of an ear (the National Association for the Deaf symbol for hearing assistance), and the letter for telecoil.

Archbold said the telecoil is built into all cochlear implants and 90 percent of hearing aids. However, an audiologist must activate it. For people who don't have devices or implants, locations loan portable receivers and headphones.

Mission Trails foundation executive director Jay Wilson said he heard about loops from Dorothy Leonard. A founding member of the foundation, Leonard is secretary/treasurer of its board. She also chairs the park citizens' advisory committee.

Leonard said on June 24 that the Americans with Disabilities Act requires assisted-listening devices in public buildings. Leonard and Wilson learned from Steve Haupt (City of San Diego open-space district manager) that the city would pay the approximately $5000 installation cost.

Dorothy and her husband, Dan, belong to St. Dustan parish. Dan has cochlear implants in both ears, and Dorothy began researching methods to help her husband better hear nine years ago. The Leonards received permission from the vestry (church governing board) to raise funds to install loops, and Archbold did a demonstration earlier this year.

Dorothy declined comment on the amount she and Dan donated toward the approximately $15,000 cost to loop the church. Others contributed, and "we raised all but $1300" in about three weeks, she said. Now the focus is on raising approximately $7000 to loop the hall. 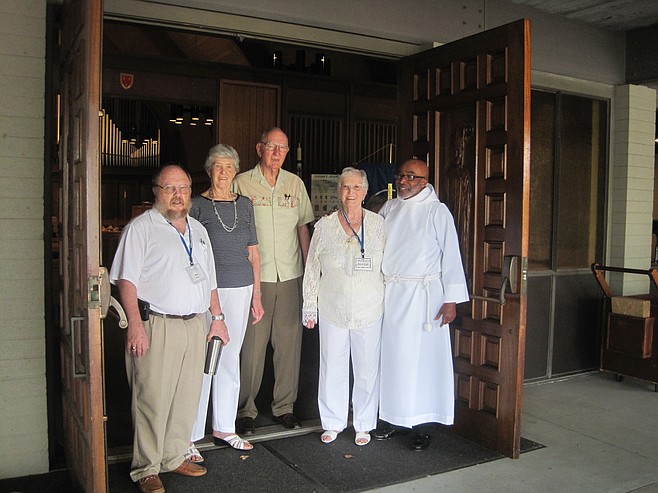 Ray Sifton is St. Dunstan's IT person and will serve in that capacity for Mission Trails' loop system. After the Sunday service, he and Dorothy spoke with churchgoers about their loop experiences. While a man told Sifton that he "heard well," several people had trouble hearing the Rev. Lonell Wright when he left the altar to give his sermon. Sifton diagnosed the problem as the wireless microphone used by Wright, who is retired and was filling in. He used a microphone calibrated for another priest's voice.

Shirley Bening told me, "I could tell a difference." She heard some people speak more clearly and said sound from the pulpit was good.

Dan smiled and said, "It's [looping] good and bad. Now I have to listen to the sermon."

In a June 29 email, Dorothy wrote about the 10 a.m. service, saying it was "beneficial giving Father Wright a different microphone…. A woman who is extremely hard of hearing was able to hear and understand the entire service." A man "who does not wear hearing aids but is hard of hearing" used the receiver and headset. "He was very impressed." The choir sings by the altar, and a member "said it worked well."

"Jay Wilson, foundation executive director, said he heard about loops from Dorothy Leonard. A founding member of the foundation, ..."

What foundation are you referring to?