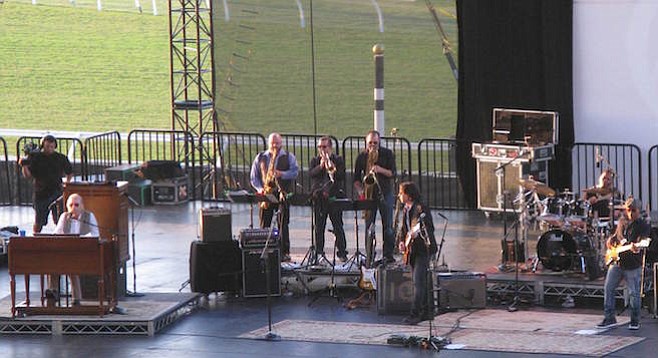 Timeless tunes bring our reviewer back to childhood

Thanks to my older brothers, I developed an early appreciation for the Allman Brothers Band’s Southern rock as a child in the 1970s. Some 40-odd years later, hearing “Statesboro Blues” or “Ramblin’ Man” brings me back to my youth. So I’m sure I wasn’t the only one among the mostly over-50 crowd who was time-trippin’ when Gregg Allman and his current eight-piece band visited the San Diego County Fair for a mix of the Brothers’ and solo hits.

Kicking off the night at the piano with “Hot ’Lanta,” about his home state of Georgia, Allman later moved to guitar for a rousing version of “Ain’t Wastin’ Time No More” and eventually took a seat behind his classic Hammond B-3 organ.

Despite battling substance abuse and enduring a liver transplant in 2010, Allman’s soulful voice was in fine form and he seemed at peace with his past and enjoying the moment — as on early highpoint “I’m No Angel.” This isn’t to suggest the singer-songwriter, now 67, was devoid of humor. Poking fun at his memory, introducing “Queen of Hearts,” he joked, “This is a song I wrote back in 1972…or 3…or 4.”

But tonight’s 90-minute show wasn’t just about Allman or the Brothers. From the tender and beautiful “Melissa” to the crowd-pleasing “Midnight Rider” and set-closing “Whipping Post,” Allman’s incredibly tight band — anchored by guitarist/musical director Scott Sharrard — had numerous opportunities to jam through rearrangements and showcase their chops, bringing new life to these time-honored tunes.