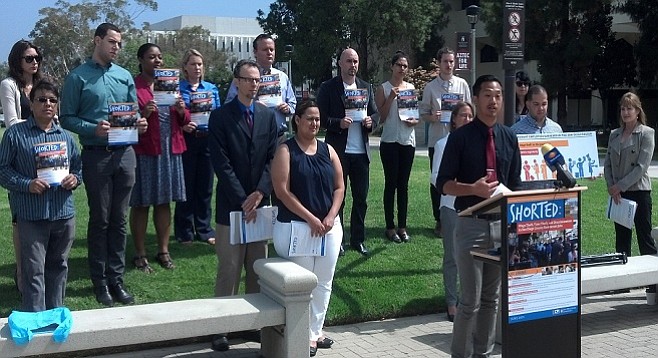 Wage theft is a pervasive problem in the local restaurant industry, according to "Shorted,” a report released Tuesday (June 16) by San Diego State University Department of Sociology and the Center on Policy Initiatives.

More than three-fourths of the 337 restaurant employees researchers spoke with indicated they'd been denied wages in some form or another over the past year. The most common form of wage theft, reported by 60 percent of workers to have occurred at least once, is forced off-the-clock work.

Restaurant staff reported being told to come in early and prepare the kitchen or dining room for work before clocking in, being forced to clock out and continue working, and having managers fabricate time cards showing they'd taken unpaid breaks that never happened.

Other illegal employer practices included owners and managers demanding a share of employees’ tips, charging the employee credit card processing fees to collect tips left by card, charging employees for lost or damaged equipment and products, and forcing employees to pay when diners left without paying their bill. Some owners pay their workers less than minimum wage, a common practice in tipped positions in other states but is illegal in California.

"We found widespread violations of wage and hour laws, resulting in workers being robbed of wages they earned and are legally owed," said professor Jill Esbenshade, who worked with a team of graduate students conducting the research. "Seventy-seven percent of workers say they've experienced wage theft, and 33 percent say it happens regularly — either often or always.

"The tip system is obscure and complicated, and workers often don't know what they're owed," Esbenshade continued. "In fact, more workers in the survey didn't know whether they were having tips stolen than knew."

Matthew Phutisatayakul, a graduate student at SDSU who worked on the report, recalled his own difficulties with restaurant work he took on to pay his tuition.

"I was a full-time student and a full-time waiter for two years," Phutisatayaku said. "At the time, I didn't know many of these practices were illegal. When I started, they paid me below minimum wage and said I was 'under training pay.'

"Even when I started receiving minimum wages, I didn't receive equal tips. The manager's explanation was that she felt that she was entitled to a portion of my tips for the time she took to train me. I let it slide because I needed the money. I spoke with the other workers and they said they'd all gone through the same process."

Another difficulty unearthed during research involved worker scheduling. Because restaurants experience changing demand, 85 percent of workers don't know when they'll be working until less than two weeks from a scheduled shift. Sixty-five percent said they didn't find out when their shifts were until a week or less before they were scheduled.

Such unpredictability in an industry where only 3 percent of workers say they have a fixed and reliable schedule caused workers to complain about difficulties in arranging transportation, schedule family events, and anticipate future earnings for budgeting purposes. Others complained about being "on call," where they had to wait to see if there was enough business to justify their coming in at all — some showed up to work only to be sent home an hour or two into a shift if customer counts declined.

"The bottom line is that we're talking about violations of laws that are already on the books,” said center research director Peter Brownell. "We need to give enforcement agencies the resources they need to enforce those laws…the state labor commissioner has less than 100 investigators to cover over 18 million workers in the state.

"We can't wait until vulnerable workers like those we're with today stick their necks out and make complaints. We need to actively go out and find these violations."

It is amazing that the restaurant industry's profit is based on a low wage low/no benefit part-time workforce, many of which are illegals, and then cheats them out of their hard earned money. The State allows less than minimum wages and then taxes the forced-to-share tips of the wait staff. On top of that the taxpayers supplement the restaurants profit by providing welfare benefits to the workers.

I agree since the industry hires a lot of illegals there is more temptation to cheat employees. The govt does need to do more to get rid of undocumented workers at these businesses however.