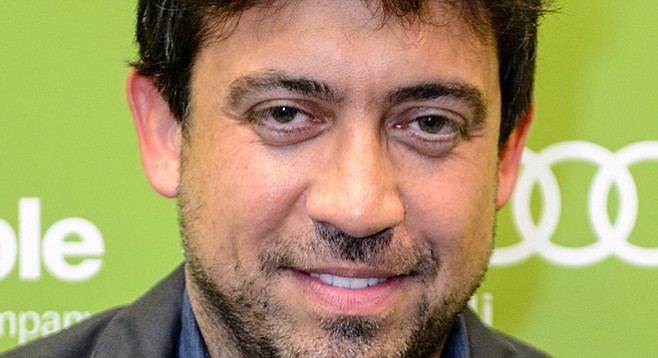 Me and Earl and the Dying Girl tells the story of high school film geek Greg and his friend Earl, who spend their free time crafting homemade spoof/homages of classic films. But the two run into a creative wall when they set out to make an original work for Rachel, a classmate with leukemia. It won the Grand Jury Prize at this year’s Sundance Film Festival.

Matthew Lickona: Let’s start with a technical question: I don’t know if I’ve ever seen a shot quite like the one you use in the high school hallways, looking down from what feels like the intersection of wall and ceiling. It’s not quite God’s eye view...

Alfonso Gomez-Rejon: I wanted the high school sequences to be very wide, very aggressive, so that you feel what he feels when he’s walking in: that fear. You see how he’s trying to be invisible, and it’s hard to find him in the crowd sometimes. It was great finding Schenley High School, which is where [source novelist and screenwriter] Jesse Andrews went and has been there 100 years and just closed down five or six years ago. We got a handyman to let us in, and the scale of the school comforted me on so many levels. I realized, “Okay, this is the aesthetic of this world. We’ll light it with flourescents; it’ll feel like a prison, but it’s a real high school. It’ll add texture to the movie, and it will become its own character, so different from Rachel’s world. And when you have 22-foot ceilings, you can really go extreme with your angles.

ML: Now for something more personal: why doesn’t Greg like himself?

AG-R: Why didn’t I like myself when I was that age? For one thing, he’s self-critical about his looks. In the book and in the screenplay — but not so much in the movie version — he’s a fat kid. And I was a fat kid, and tortured about it every day of my life by my brother. So it’s one of those things. I don’t know of one person who didn’t hate themselves on some level growing up, and if I do, I probably don’t like that person. It’s such a critical time in life: why do I feel uncomfortable with everyone I’m with? Why am I a weird artist who loves Werner Herzog and no one will ever understand me? Of course, he hasn’t shared that love with anyone else yet, other than Earl.

AG-R: That was actually scripted: the scene where Greg does Herzog’s voice, and the use of Aguirre, the Wrath of God. And we couldn’t reference Herzog without doing something on Burden of Dreams [a documentary on the making of Herzog’s Fitzcarraldo], which inspired the spoof, Burden of Screams. We were actually able to get Herzog into a screening of the film, and he loved it. He sent an email and invited me over to his house for espresso, and we talked about it. After this film, that was the most surreal moment of my life, getting an email from Werner Herzog.

ML: Talk about selecting the other homages that Greg and Earl make.

AG-R: A lot of thought went into that, because it was my opportunity to thank all of my mentors and all of my heroes and their films that shaped me as a filmmaker, and I’ll never have that opportunity again. It’s obsessive and it never ends; you can never finish the list. Bunuel’s Simon of the Desert was cut out of one of the scenes, and it crushes me. I was going crazy. There were three categories. The first was spoofs [e.g., The Third Man becomes The Turd Man], the films within the film made by Edward Bursch and Nathan O. Marsh. I would come up with the titles and Jesse would rewrite the titles into a pun, and we would continue into the realization of the shorts and the DVD covers that were so beautifully done by Nate. Then there were props and set dressings, like the Faber & Faber first edition of Scorsese on Scorsese. He’s probably the greatest man on the planet right now. Greg’s screensaver is a picture of [Scorsese’s longtime editor] Thelma Schoonmaker. And she, of course, is married to Michael Powell, and so that led to the Powell & Pressburger films and the Archers logo. I knew [writer] Nick Pileggi through Scorsese, and so there are two scripts next to Greg’s computer: Casino and Heartburn, the latter by Nora Ephron, who is the reason I can call myself a director. She made Paramount hire me as her second unit director. It goes on and on. The third category is something like Kaleidoscope Jazz Chair by Charles and Ray Eames, a film that has ideas that will eventually find their way into Greg’s final film.

Me and Earl and the Dying Girl

ML: At the very end, Greg puts a post-it note on the film he’s sending off, and it strikes a sort of comedic note. Why does he do that?

AG-R: In the screenplay, he looks into the lenses and crosses his eyes. That was a detail too far for me, but it does push back on the sentimentality. We’ve just come through something heavy, and you need to recover a little bit. You recover with his words: he’s come of age, but he still has a very specific voice, and his self-criticism is intact, and I think it’s going to make him a great artist in the future. There’s a lightness in all of it.

ML: Speaking of lightness, could you speak generally about the film’s use of comedy?

AG-R: It’s essential to the creation of something that’s realistic and entertaining. It was very important to me that the bitter and the sweet would coexist the way they do in real life. Little things that keep pushing back on you and reminding you that [even in the midst of drama], we share the space with comedy. You have to balance that in the editing. If you linger on a closeup too long, it might feel like a love story or be too dramatic. If you hold a wide shot too long, it might feel like a comedy, and that will destabilize the calibration. Then when the music comes in, you have to make sure it’s neutral, that it’s respectful of the audience and isn’t something that will just underscore an emotion. The emotion has to be earned. It was there on the page, and that’s why we cast the film so carefully, to make sure we had actors who could pull of both emotions in a way that felt effortless and natural. 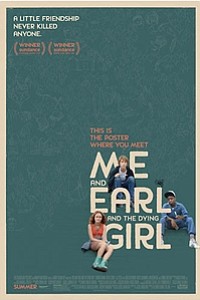 Me and Earl and the Dying Girl 0 stars

ML: It’s interesting you mention that. There are a couple of places in my notes on Rachel’s mom (played by Molly Shannon) where I’ve written, “This is verging on camp.” I was squirming in my seat when she was stroking Greg’s face and cooing over him and hugging him too long.

AG-R: Look at Molly’s eyes when she first sees Greg in that scene. It’s very, very subtle, but you can’t deny the pain that she’s gone through. She’s been relying on her sense of humor her entire life, and she’s struggling with it now. She’s appreciative of Greg visiting her daughter, and she probably hasn’t touched a man in God knows how long. At the same time, she’s developing a drinking problem. She’s a complicated woman in deep denial. Look at how she’s designed the space around her: it’s stark, it’s clean, no family photographs. Then you go upstairs to her daughter’s room and you sense how she’s made a nest, with colors and patterns and light and family photos. There’s a story there that is hopefully entertaining and funny, but there’s also a depth there that Molly does so well.

AG-R: Oh, I can’t do that. What — The Last Temptation of Christ is to The Ten Commandments? I don’t know. I’m never going to answer that. I hadn’t read the novel, and the movie came out while I was shooting. It’s a love story, and our film is very much not a love story. I have the utmost respect for its success; they must have tapped into something authentic. I hope we get close to achieving that.

Is he half asleep?