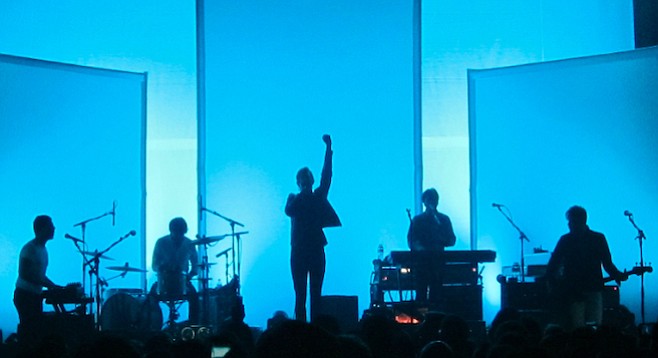 Spoon: a spectacle in lights

Lucky for Britt, Dryw's going to give him another chance...

On the first date of a two-night stand at the Observatory North Park, Spoon delivered their trademark indie art-rock, complemented by a spellbinding light show that was one of the coolest this reporter’s seen at a midlevel concert in ages. I would urge even casual fans to check out this tour for its set mix with song-specific lighting. It was a mesmerizing spectacle. Whoever was in charge of the lighting design for this tour gets a gold star for their efforts!

The songs were a grab bag of fan favorites from the band’s catalog. Personal faves included “The Ghost in You Lingers” (which was synched up with a standout lighting sequence), “Small Stakes,” “Black Like Me,” and “Don’t Make Me a Target.” During the main set, the band performed what lead-singer Britt Daniel referred to as “a new song,” which seemed to be about satellites and went over well. The crowd moved and swayed to it as a crowd would move and sway to a Spoon song they knew and loved.

The only downer of the night for me (and without a doubt one other gentleman near the stage) was when, during the encores, Britt Daniel asked said gentleman if he had a specific song request, and the gentleman requested “Who Makes Your Money,” and I thought YES!!! — not only because it’s probably my favorite Spoon song, but also because it’s probably an odd choice for a favorite Spoon song as well. This guy was on my wavelength! Britt laughed and said it was a strange request, but that they’d try it. Then the rest of the band seemed reluctant to play it and Britt asked the audience, “How about ‘Got Nuffin’? It’s from the same record.” At this point I literally screamed at the top of my lungs “NOOOOOOOOO!!!” but the band launched into “Got Nuffin” anyway. My heart sank and my love of Spoon officially ended, until I remembered that they had performed a cover of Wire’s “Mannequin” at the beginning of the encore set. Okay, I will give them another chance.