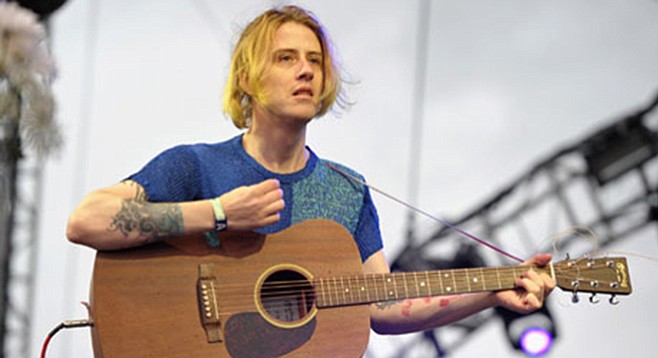 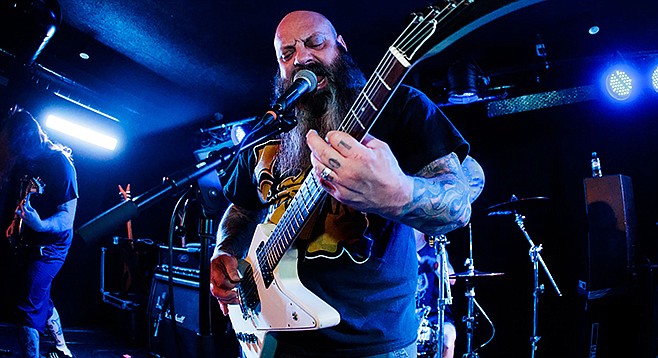 From New Orleans, sludge-metal band Crowbar takes the stage at Til-Two on Thursday.

Thursday 4
Gumbo metal! “Driven by doom and hard Southern living,” Crowbar’s latest, Symmetry in Black, starts with a slow, sludgy roux and then snaps your neck with hardcore heat. And only a metal band from metal-rich New Orleans can get the recipe right. Kirk Windstein and his 25-year-strong Crowbar hit Til-Two upside the cranium after Battlecross and Lord Dying get your hard-rocking bobbleheads going.... The helmet-headed, cannonball-suited blues-punk slide player Bob Log III takes the stage at Casbah after our own psych-rocking Schitzophonics and “doom-pop” duo Gloomsday for a fun one Thursday night. Fair warning, Bob expects full-participation attendance: you will pass him overhead in a rubber dinghy, you will Hokey Pokey and turn yourself around, and if chosen, you will stir his scotch with your boobie. I’ve never had the pleasure, but my gf says it’s cold. Oh yes, she did. It’s when I fell in love with her.... Best of the rest: the Irenic hires the Rentals. Check out Dryw’s interview with head Rental Matt Sharp in this week’s “Experimental Rentals” Blurt. Rey Pila and Radiation City are also on the bill...and the Hideout hosts a Stay Strange happening, featuring the noisy boys of Innerds, Tron, Zsa Zsa Gabor, and Self Esteem. 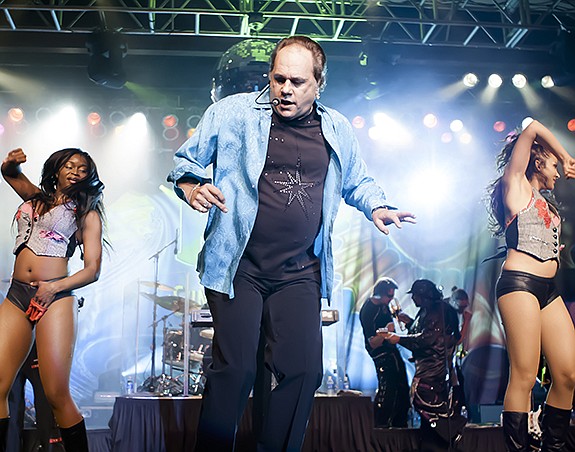 KC & the Sunshine Band kick off this season's concerts at the Del Mar Fair!

Friday 5
Christopher Owens’s backstory is an oft-told doozy ­— escaped from a cult (Children of God), escaped from a popular indie-rock band (Girls) — so let’s let it lie and pick up with Owens last week, when he released via Twitter his new single “Selfish Feelings,” tweeting that it’s off of a “soon-to-be-released” full-length. By soon-to-be-released, Owens meant the next day, when the 16-track surprise solo album, Chrissybaby Forever, hit the interwebs. Owens plays Casbah with L.A. pop-rock artist Devon Williams Friday night. Catch him if you can.... Miss the door in Middletown, local favorites Mrs. Magician and Mr. Tube hook up at Soda Bar. You’re thinking, I wonder if Mr. Magician and Mrs. Tube know...garage-punk Canada band July Talk is right down the road at the Hideout...from L.A., gut-bucket-blues-rock-abilly band Three Bad Jacks stack ’em at Brick by Brick after Gamblers Mark and Radarmen...local alt-rock quintet Idlehands plays a CD-release for their new one, Dena Mora, in the Voodoo Room at House of Blues after Barbarian, Armors, Big Bad Buffalo, and Scuffs, making for quite the local showcase now that I see it all typed out like that...and last but in no way least, we see your boogieman, KC, and his Sunshine Band will be kicking off this season’s concerts at the Del Mar Fair. 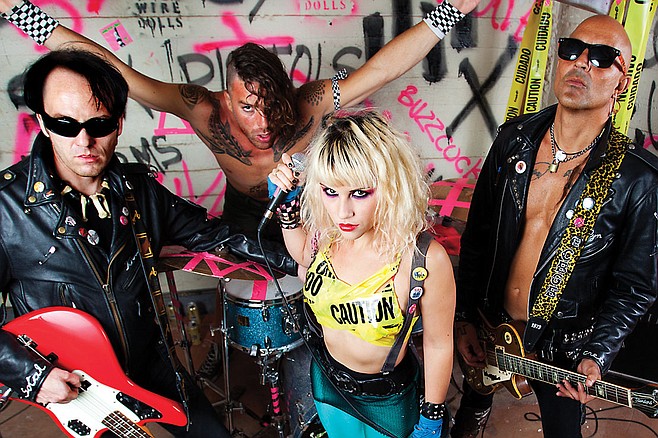 Saturday 6
SaturDAY sets up Art Around Adams noon till 8p. One day only along the Kensington corridor. Get all the rock-and-roll goodness right here: artaroundadams.org...and them crate-digging, cocktail-swigging Vinyl Junkies return to Casbah from 11a till 5p for your one-stop record swap...then on SaturNIGHT, from Quebec, Canada, it’s odd-pop hockey puck Patrick Watson, touring in support of this year’s Love Songs for Robots, and Irish indie-folkies Villagers splitting a bill on the Middletown stage.... Punk the Fussies! From Hollywood-via-an-artist-commune-in-Crete, Greece, punk-n-roll four-piece Barb Wire Dolls play Soda Bar with like-minded locals the Touchies, Rum For Your Life, and Revulot-Chix. Isis Queen and her Dolls will be this summer’s house band at Whisky a Go Go, if you’re in the neighborhood. Fans of the L7 brand should def. check them out.... Else: from the O.C., skate-punk trio Agent Orange drops in at Brick by Brick with Henchmen and Authentic Sellout. Ken caught up with Mike Palm in advance of this week’s gig, so flip or click over to his “Agent Dad” Blurt for that chat...Octagrape will bring their branded “globby glob songs with fur amps” to headline sets at the Hideout after Cotillon and Andy Human. If you haven’t already, get to the Grape’s Bandcamp page for their killer covers EP Major Mayor Maxion Marble...and House of Blues is serving Unwritten Law with Cali punk perennials Ten Foot Pole and saxy subway buskers Moon Hooch. That is a tasty triple-decker for just ten bucks.