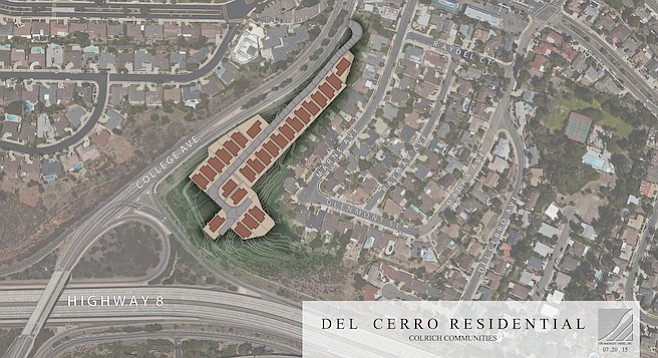 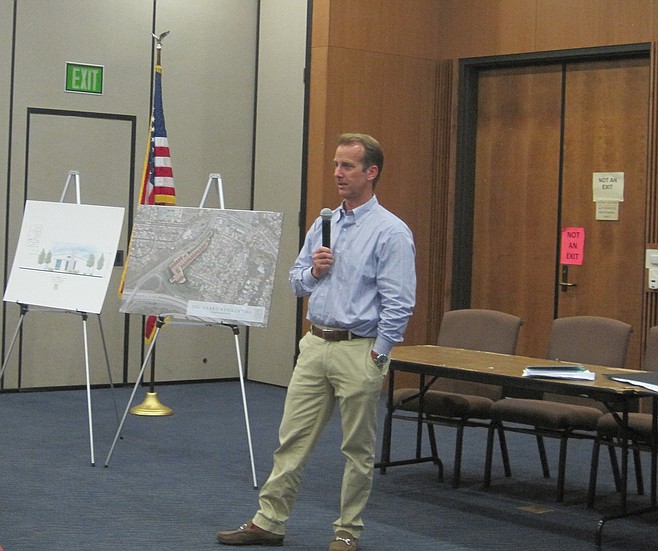 Traffic was the primary concern of residents attending a July 23 presentation about a proposal to build 26 single-family homes on a 5.6-acre vacant site located south of the Del Cerro Boulevard/College Avenue intersection and north of westbound Interstate 8. About 100 people attended the Del Cerro Action Council meeting where Tony Pauker, vice president of acquisitions for San Diego-based ColRich, Inc. spoke about the project that would have only one entrance/exit.

As Pauker answered questions at Temple Emanu-El, other people spoke, and it was sometimes difficult to hear. I contacted him on July 24 to clarify details. Furthermore, people didn't give their names during or after the meeting. 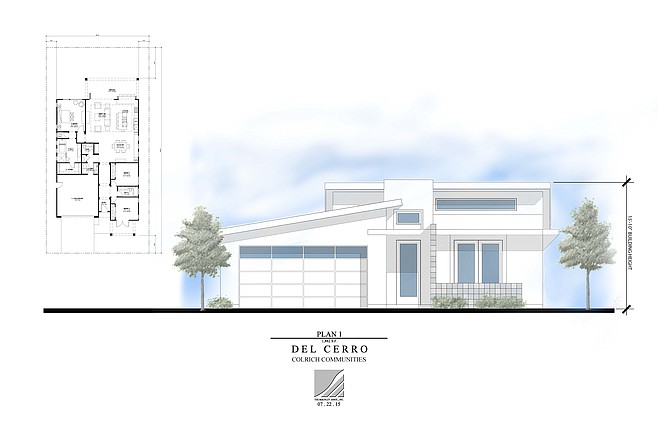 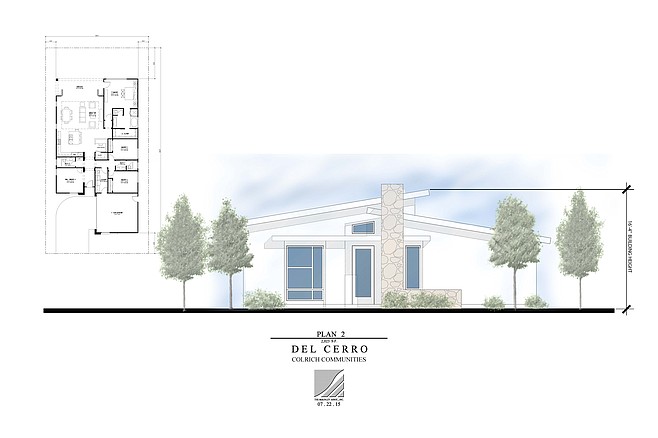 The "largely one-story" homes priced in the "high $600,000s" will be built on 5000-square-foot lots. The three-bedroom, three-bathroom homes will be 1800, 2000, or 2275 square feet. The design "concept is based on the mid-1960s architecture of the surrounding homes with large windows, open floor plans, flat and shallow-pitched roofs, and large windows," said Pauker.

He described a timeline that included submitting a tentative map to the city a week and half earlier. 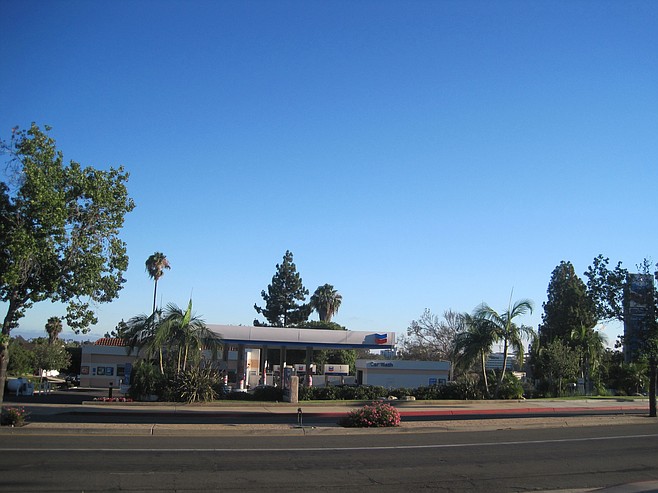 Project access would be on College Avenue, about 100 to 150 feet south of the Chevron station on the southeast corner of Del Cerro Boulevard and College. There are plans for a deceleration/acceleration lane on the property, and the right-turn lane from College to eastbound Del Cerro Boulevard will be lengthened. Drivers can only leave or enter the property by turning right on College.

That issue was also raised when Pauker spoke at the July 8 Navajo Community Planners, Inc., meeting. At both forums, he said illegal turns were a police-enforcement issue. He said the City of San Diego requires a traffic study when a development will generate 500 daily trips. Although the ColRich projection is 260 trips, the developer is doing a traffic study.

No U-turns until Waring Road

Pauker said the scope would be expanded to six intersections. When I asked which intersections, Pauker responded, "That will be determined by the traffic engineer," with intersections to the "north, south, east, and west."

At the Del Cerro meeting, he said U-turns weren't allowed for southbound drivers until College turned into Waring Road in Allied Gardens. A woman asked if the study would look at school-related traffic. Before he answered, another woman said the Einstein Brothers Bagels (the northeast corner of College and Del Cerro Boulevard) "doubles the traffic" in the morning.

Pauker said the city requires studies during the school year and summer.

A woman asked how residents would return from Phoebe Heart Elementary School, which is west of the College/Del Cerro Boulevard intersection. Pauker said by driving south of College to El Cajon Boulevard. "Oh my God," another woman said as he described a freeway route. 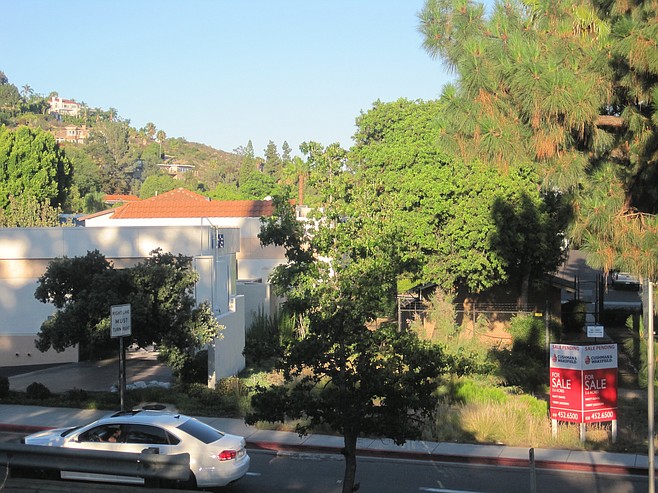 Land south of Chevron. Despite what sign says, Pauker said land is not for sale.

Later, someone asked who owned the land. "Marburn Corporation," said Pauker. At the earlier meeting, he said the owners were in Toronto. Websites including California Corporates showed Marburn incorporated in 1975, has a San Diego agent, and Toronto address.

A man referred to a previous owner's plan to build duplexes on the site during the 1970s.

Will they become SDSU mini-dorms?

People asked when they could comment on the project. He said documents were public, and he would return to the planning group with updates.

The woman who spoke about Einstein traffic said, "We can go to the city as a group."

After the meeting, a man distributed a yellow handout with reasons the development "should not proceed." The reasons (also cited in the meeting) included construction noise and concern that the homes across the freeway from San Diego State University would become mini-dorms.

It would be interesting to know why homes were not built there when the original "60's" homes were built in the nearby subdivision. Was it because back in the 60's, even when traffic was 1/3 of what it is now in that area, because people did not want to be so close to the traffic and noise of College and I-8?

In the old days, the Fire Marshal would vote against it, and the fire department would not put pumpers down in that rat-hole. If they're insurable at all, the rates will be high. How they can get 5K sf lots in there must be a trick (right-of-way plus steep banks or how much fill? Likely a massive amount, requiring a large-diameter drain pipe that must be maintained and will be a hazard to children and other life-forms, being an extremely long run buried so deeply that maintenance or repair/replacement will be a costly nightmare--for the taxpayer, not the long-gone developer.). Beware of graphics. Let's see a topographic map, a grading plan, and some quantitative figures. Get flood insurance too. Adjacent property values are likely to dip, and the community will loose one last bit of open space. How many cars have been hauled out of that hole? Where will errant vehicles end up post-development? And who will buy them? Note that there is no cul-de-sac for a firetruck turnaround anyway, so they must not expect any fire trucks. Will the intersection be signalized? Will westbound traffic be required to go all the way to Montezuma, make a U-turn (screwing up traffic there) and then come back, for a two-mile trip to get into the proposed street (200 feet from the major intersection, so a signal is out). Will they be asking for a left-turn lane for W/S-bound traffic, or worse, a break in the median?

What's the chain of title on this piece? Did somebody wrangle some right-of-way from the state?

Tricks, tricks, and more tricks. And more are likely buried in the details--these are just the ones that spring to mind . . .

Yes, how did someone get title to that land? I would have thought that land would be extended lot-lines from the original subdivision. Basically useless, unlevel land. Now all of the sudden someone has the title and wants to build homes on it? I am all for infill and trying to reduce sprawl. But this is "sprawl" and is the type of development that may offer homes for the transplants that find their way here, but it is going to reduce the quality of life for many people who have owned the nearby homes for 10, 20, 30 years and more. How is that an improvement? Infill should be employed where there is enough land, say a blighted district, where they can reshape the neighborhood and make it better. This thing just piggybacks on an established neighborhood and sucks more resources out of it and introduces more traffic, and in this instance leaves occupants stranded from their homes unless they break traffic laws. Now, that is a different story. But when it comes to traffic laws, I see a marked difference in how people "obey" them today compared with years ago.

I posted that I suspected that "they" got the land from CalTrans, but something went wrong and it didn't end up here like it should have--unless it got pulled.

But I also agree that there should have been extended lot lines to the r-o-w boundary.

And yes, there is a marked change in the way people honor laws more in the breach than in the observance. I'd like to see a count per 100K of failure to yield to pedestrians tickets over the last 40 or 50 years . . .

Oh, yes. If deep excavation is required in the case of a failure of the drain pipe, access might be limited to zero until the work is completed.

And from whence will they "borrow" the fill?

Yes, this one should be scrutinized carefully.

One more example of how the "devil is in the details." This sounds like just another example of infilling into an area that went unused due to the cost of the earth moving and grading. Now that there's a dearth of space in that part of the city, it makes sense to use it, on the surface. Those traffic flow restrictions are, in a word, bizarre. And you can be sure that anyone living in there will be looking for shortcuts, regardless of their legality.

As to the style of architecture, I'm sick of seeing nothing but Cal-Med stucco houses with red tile roofs. It's been about forty years since anyone has built anything else for the mass market. So, this proposal at least is breaking with "tradition."

Even illegal turns would have to cross the median, clogged with unnecessary trees. Right turns out of the development would be hazardous too, due to the high speeds of northbound traffic. There will be a temptation to use at least a proportion of expansive soils in the fill, leading to cracks in buildings, sidewalks, and streets etc. Even relatively non-expansive material will load up with water over time, creating differential settling or worse, lateral movement of the fill mass. Of course, this is true of all developments that use fill--it's just a matter of time. Soledad, Oceanside, and all over Southern California and elsewhere, fills are time-bombs waiting for the moment when enough water accumulates to destroy cohesion and reduce friction that binds soil particles together in an unconsolidated mass once "strong enough" to keep structures from moving with the mass, as in, for example, sliding off the hillside. A deep, dark secret of "geotechnology."