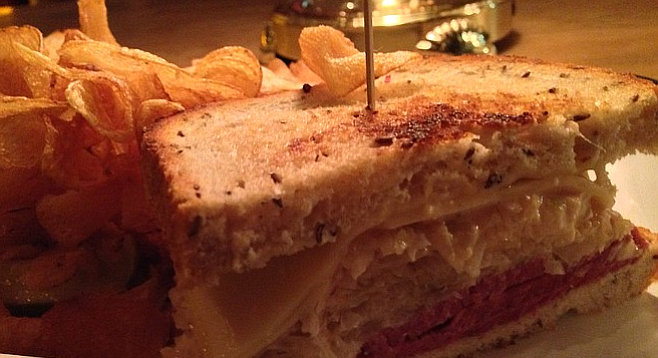 Would I step over other pastramis to get to this one?

Whenever I mouth off about what makes a good pastrami sandwich, somebody’s around to chime in about one restaurant’s in particular: Rare Form, Consortium Holdings’ take on a Jewish deli. Now, I’m almost as big a fan of CH restaurants as I am of pastrami itself. Underbelly’s ramen is a personal favorite. I constantly crave the mac and cheese from Soda & Swine. And I always recommend Ironside to friends looking for seafood served with panache. The point is, I’m surprised I haven’t already been to Rare Form since it opened a year ago. 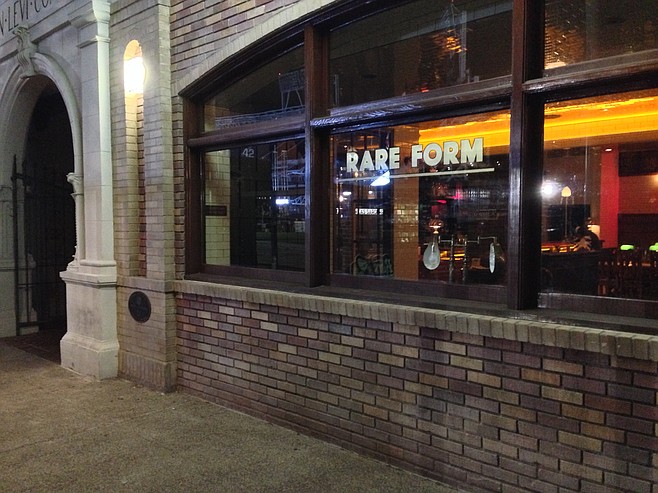 Let’s blame the ballpark. The location isn’t merely Petco adjacent, it’s one of those brick wall businesses lining the Park within the Park. I’m typically loath to venture into East Village for dinner due to parking concerns, even during the off-season. But it occurred to me one recent Monday night that the Padres were out of town, and most of the city was recovering from a long weekend.

I found parking without issue and walked into an empty dining room. Devoid of people, I should say, because the spot is decked out to the point I couldn’t decide what to look at first: walls consumed by portraiture of 19th-century gentlemen, distinguished library-like seating (complete with bankers lamps), indoor bocce courts….

Like many of the group’s restaurants, there’s no table service — you order at the counter. Normally this bugs me, but on a slow night, who cares? I asked a lot of questions about the menu even though I knew before I arrived that I’d be eating the Rare Form 44 pastrami sandwich. 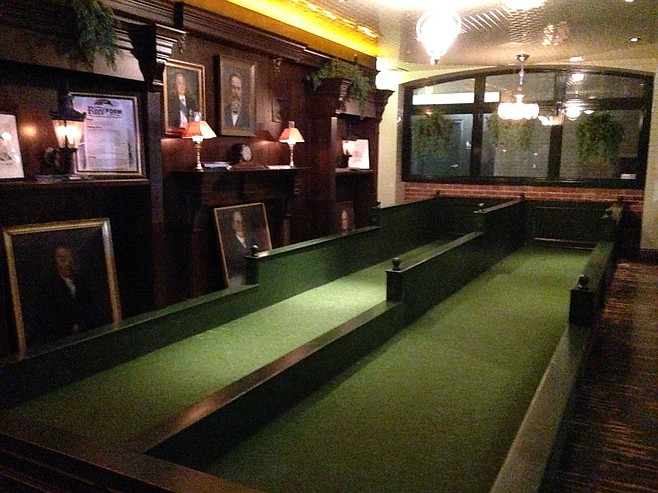 Bocce with your deli sandwich, anyone?

Here’s the thing. For bread, rye has a strong flavor. Swiss cheese normally does not, but here they use earthy/musty Swiss, the kind a cheesehead could adore. And sauerkraut — well, that’s simply one of the sharpest tasting vegetable creations known to mankind.

Each of these contribute to this pastrami sandwich, along with a “special sauce” that I’m sure features dill. At its center, of course, is the pastrami. Rare Form’s pastrami is cut thick, nearly a quarter inch, like you might find at New York’s legendary pastrami destination, Katz’s Deli. In other words, these are thick cuts of pungent meat stacked on a sandwich comprised of richly flavored ingredients. Something’s got to give.

For me, it’s the sauerkraut. The salty vinegar pushes an already aggressive sandwich over the top. Don’t get me wrong — I ate that thing like there was no one watching and enjoyed it. But would I step over other pastramis to get to this one? No. Will I develop an unholy obsession about this CH dish like I have its tonkotsu broth or bacon mac? Not likely. But I will go back to try the porchetta. On a slow night.