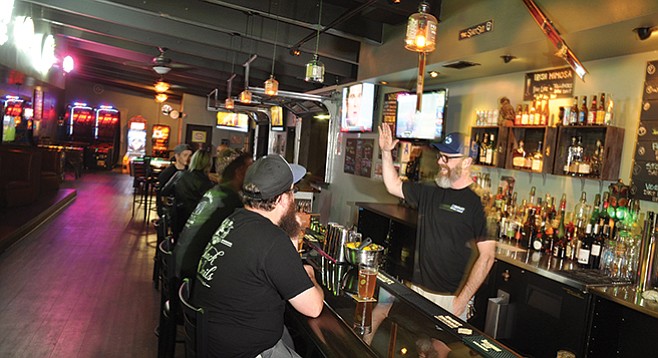 Blame the humidity, but my first instinct upon entering Sidecar was to draw a cynical correlation between the place’s name and the thought that they were more or less riding shotgun to the passing fancies of modern San Diego bardom. Expansive roll-up windows shout “neighborhood craft beer bar!” while a slew of arcade games in the corner where the Griffin’s stage once stood appeal to a whimsical, young professional sensibility (looking at you, Coin-Op).

Maybe I went in with a muggy attitude, certain that nothing would ever outdo the divey Irish abandon of old O’Connells. As I scanned the reasonably priced and well-constructed cocktail menu, a rude contempt welled up inside of me. How dare they deprive the location of its long-lived cavernous charm! But as I polished off my second El Duderino — a refreshing if not inventive swirl of horchata vodka, Kalua, and Coronado Blue Bridge Coffee Stout — it became evident that Sidecar was much more than an amalgam of ephemeral fads.

No, Sidecar has dialed in the obscure location in a way that none of its predecessors had. The beer list, for starters, is a smart selection of 14 local and out-of-town crafts (one nitro) all priced around five bucks. The cocktail menu, meanwhile, touts nine preparations that draw heavily on Ballast Point’s distillery and select liquors. At $8 a pop, one would be remiss not to sample several of Sidecar’s offerings. Of special interest is the PCN RX, a medical-grade mixture of Monkey Shoulder scotch, lemon, ginger juice, and Montelobos mezcal. The flavor clash is just such that the palate is perplexed into a state of seduction that lingers like a fine blue cheese.

In the end, the arcade games prove crucial to what might otherwise be a humdrum environment. Jurassic Park pinball, skeeball, the obligatory Big Buck Hunter, and a (surprisingly) engaging golf game animate the barroom, which previously held a much more huddled, confidential ambiance.

Opened last November by the owners of the Regals Beagle and Seagull, Sidecar offers daily specials, including: Mondays, $2 off everything; Tuesdays, trivia at 7:30; Wednesdays, $4 well mules; Thursdays, special events with guest breweries and live music; Fridays, live music; and Sundays, $6 pitchers and free pool. Pizza Port sponsors a Pop-a-Shot basketball tournament every first Thursday with prizes and discounted cans of Ponto, Chronic (both $3), and Swami ($4).