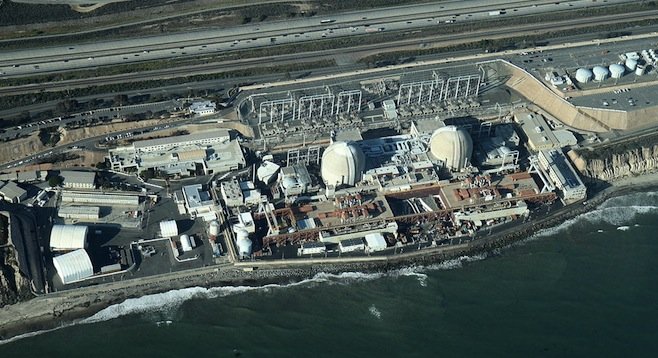 Voice of reason at the Union-Tribune

In an editorial this morning (July 20), the Union-Tribune says that the California Public Utilities Commission's (CPUC's) San Onofre decision, socking ratepayers with 70 percent of the costs of the nuclear plant's closure, should be scrapped. "It's quite possible a case could be made that ratepayers shouldn't pay a dime," says the U-T.

The editorial notes that the decision was made without a thorough, transparent investigation of the equipment failure. The U-T mentions the hush-hush Warsaw, Poland, huddle of former CPUC president Michael Peevey with an executive of Southern California Edison. The initial framework of the deal was sketched out by Peevey at that meeting, which Edison did not report until much later.

"The meeting is only one of dozens of outrageous examples of Peevey's machinations," says the U-T, noting that Peevey's replacement, Michael Picker, "has circled the wagons and obstructed journalists" trying to get at the truth.

Yes! Instead of "ratepayers" footing the bill, let's make the taxpayers pay for it. That'll be a huge difference!

Gee wiz wouldn't it be better to saddle the share holders of SDG&E, a for profit corporation, with the cost of poor management? Failure of share holders to ensure proper management means they have the risk.

Making the tax payer carry the load isn't even on the table.

MichaelValentine: Yes, the shareholders should pay more than 100 percent of the costs. That is because the company is already trying to shovel billions on to the ratepayers, but it is also spending money like crazy to avoid an accounting of the debacle, and will continue to do so as more muck comes to the surface. Best, Don Bauder

Sjtorres: If Edison is permitted to pass on its liability to taxpayers, you have a point. Best, Don Bauder

They always figure out a way to pass on the costs.

Sjtorres: One of the worst examples is the big banks being caught with their fingers in the cookie jar. The government fines the company, then sets it up so the company can write off much of the fine on its taxes.

The government will announce that the Royal Bank of Defaulters and Absconders has been given a $5 billion fine. Headlines blare it. Scratch that fine and you learn that the taxpayers eventually pick up much of it. And no individual is ever charged. Best, Don Bauder

Don - I see this "editoral" as something far different!

SCE is trying to stick someone else with the bill, if the ratepayers won't pony up then why not the "taxpayers" since they are even less organized than SoCal ratepayers! Guess what, the "taxpayers" ARE the "Ratepayers", so that concept is simply just more "Smoke and Mirrors" from SCE and SDG&E, both are experts at disappearing money from their ratepayers and giving it to their shareholders.

Where are the all the Government Checks and Balances we are always hearing about?

The California Regulator charged with overseeing the CPUC (Rendon) is still playing softball with the CPUC and has not even demanded the release of all the Emails from SDG&E to better understand their part in what I call #SanOnofreGate*. This is nothing less than providing "damage control" for the very Utilities that the CPUC is supposed to be regulating, by the regulator of the CPUC!

The CPUC ALJ (Administrative Law Judge) Darling (who was chosen by Peevey to hear the San Onofre case) simply choose not to allow ANY "discovery" into the reasonableness of how SCE handled the Replacement Steam Generator Project, an investigation that was required by State law since San Onofre Unit 2 and Unit 3 were each off-line for more than 9 months, which is the time specified in the CPUC code that an investigation must be initiated. Her "opinion" kept Aguirre and Severson from asking SCE employees for data and testimony "on the record". She singlehandedly derailed the entire "investigation" and I predict that time will show that she played a pivotal role in the inner group that worked behind the scenes and off the record, to limit the scope of the investigation and/or promote the one sided Pro-Utility settlement. Much has been written about her "conversations" with SCE officials, I believe that is just the tip of the iceberg, and now all of her emails (internal and to the Utilities) should be also be released and analyzed.

This is why I refer to the $5 Billion San Onofre Replacement Steam Generator Settlement Ripoff as San Onofre Gate because there are many more Officials involved than "just" Michael Peevey.

For much more information please Google #SanOnofreGate or input #sanonofregate into Tweeter's search box. This Twitter hashtag will allow you to keep up to date on all the articles relating to the ongoing investigation into the multi-billion $ SCE-CPUC ripoff that will cost every SoCal ratepayer about $1,500.

BIG Utility donations should be no excuse for our elected Leaders not speaking out about Utility ratepayer ripoffs, it is now time to find out whose interests our Leaders are representing, because silence in no longer an option if these same Leaders want to remain in Office.

Additional background about what ever more people are calling San Onofre Gate*:

CaptD: You make several good points. Yes, Rendon boasted that his bill would force transparency and accountability on utilities. Also, people would be able to sue utilities in superior court; now they have to go right to the appellate court, which can simply decide not to hear the case. Guess what: most of those things have been removed from Rendon's bill.

Also, Rendon is not forcing Picker to cough up emails. Here's what I think happened: Rendon introduced bills containing these items. Other legislators screamed: "You are killing the goose who lays all those golden eggs under our desks!"

Also, the governor found out that Picker was being forced to regurgitate those emails. Gov. Jerry squelched that in a hurry. Best, Don Bauder

CaptD: In 2009, Clopton did a study of the CPUC's transparency and accountability. She came back with a glowing report on how magnificently and magnanimously the CPUC was run -- in the open, fair to everyone.

What hogwash. She was no doubt well-compensated for the report. Best, Don Bauder

captd/founder I don't understand why you used the phrase " word has it" that Clopton is cooperating. It's public knowledge as her attorney Anthony Brass confirmed several months ago. One would have to imagine that as a cooperating witness, that she has been told to keep hands off, so as to avoid even a hint of impropriety or bias during the investigation. BTW, Clopton and her 2 daughters were invited guests at Obama's second inauguration. You are free to draw your own conclusions from that fact.

danfogel: I know you didn't address this to me, but I think that Clopton's invitation to Obama's second inauguration may mean nothing, but may mean something. How is that for a hedge? Best, Don Bauder

Part of the above was posted before:

CaptD: Yes, Gov. Brown was a great friend of Peevey. I do believe we will find -- unless the whole thing is squelched -- that Brown's fingerprints are all over some of the wrongdoing, and much of the coverup. Best, Don Bauder

Charles Langley: Yes, in retrospect, that report must be the funniest reading around. Best, Don Bauder

sounds much like the kind of thing that would be attached to the mafia's doing.

Murphyjunk: This whole misadventure with the CPUC and Edison does smack of a gangster operation -- STONEWALL! KEEP YOUR MOUTH SHUT! Best, Don Bauder

maybe someone will get "rubbed out" before the squeal