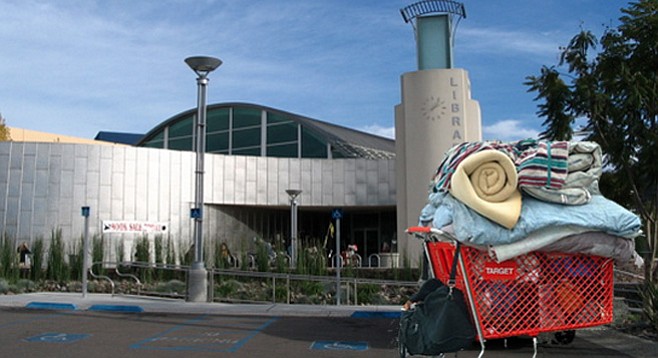 Putting the cart before the homeless

Libraries prohibit people from bringing in their voluminous possessions

Over the course of several months, librarians at Mission Valley, San Ysidro, and downtown libraries have grappled with the problem of some patrons bringing large carts inside.

Staff say the carts, often as high as four feet tall and loaded with boxes, clothing, and bed mats, limit accessibility for others; however, some of the cart pushers, many of whom are homeless, say they need to have the carts at their side for quick access to medications. They say barring their belongings violates disability laws.

To ensure a "clean, pleasant, and safe environment," current library policy bans large boxes, briefcases, and bundles as well as shopping carts and other large "wheeled conveyances." Making exceptions to the rules, says the deputy city attorney, could potentially diminish the experience for others.

"While the city’s policies, practices, and procedures must avoid discrimination against persons with disabilities, the city is not required to make any modifications that would fundamentally alter the nature of its services, programs, or activities," Li cited in the memo. "Further, the city may impose legitimate safety requirements for the safe operation of its services, programs, and activities."

At Mission Valley Library, branch manager Karen Reilly has accommodated patrons by allowing them to use the computers located near the front door in order to keep an eye on their belongings. The patrons refused unless they were allowed to chain their carts inside the library entrance. But Reilly and others objected, stating that carts chained to walls near the library entrance posed a threat to safety.

"Based on the facts provided, the city has offered the patrons reasonable accommodations and alternatives and need not modify its policies to allow them to bring their carts into the Mission Valley Branch Library computer lab, San Ysidro Branch Library, or any other City library. The requested modification in the Library Rules of Conduct would fundamentally alter the library’s services, programs, or activities and could jeopardize legitimate safety requirements," wrote Li.

At Mission Valley, the two sides did find some common ground. Patrons pushing more than one cart are now allowed to chain their carts together and leave them inside near the entrance to prevent theft or vandalism.

You should need a library card to get into a library. That'd be the easiest way to keep out the bums who want to abuse libraries.

"I have to have it right next to me to instantly get medication" is just as lame an excuse as "I have a prescription to have my dog with me at all times". But I'd rather see people taking dogs into libraries than bums pushing stolen shopping carts full of reeking garbage.

If and of those "large carts" have a business logo (or defaced logo) the individual is in possession of stolen property. The appropriation of shopping carts for personal use and removing them from the property of retail businesses is theft. When they are discarded they create visual blight in alleys, canyons and sidewalks. The cost of replacing stolen carts is passed on to the consumer. The first line of defense is to recover and return stolen property to the business that it belongs.

Once I took my son to the downtown library before the new one. He was old enough to go to the bathroom by himself. He came out to report that a man was taking a bath in the sink. I asked him how he knew that, and he said he had all of his clothes off, and was washing himself just like taking a bath. I suppose this was an educational experience, but not what I had in mind. We haven't been back. All of our libraries need to focus on being more welcoming to children.

To understand another, one needs to walk a mile (at least) in her/his shoes.

Just another example of a society that does not care about anything but money. If there is any attempt by government to help people, health care, safety regulations, job protections, etc.it is called socialism. If a company makes tons of money and yet provides the minimum in wages and benefits we fall down on our knees and pray to the god (small G) of capitalism. If jobs are outsourced or we import cheap labor we applaud management. Many of the homeless are mentally ill but the ACLU says they are free to live any way and anywhere they want. Most of the rest are bums (wino's, druggies, etc.) There are a few who do to circumstances beyond their control find themselves without a job or home. It is the direct result of putting education out of the reach of many and giving employers all the tools to reduce wages and benefits and/or shipping good jobs off shore. But what the hell there is always Walmart.