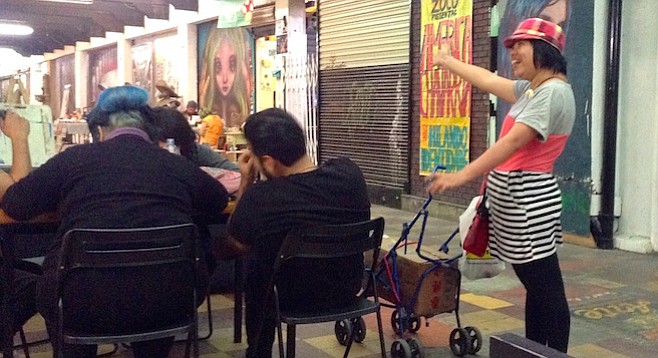 “Chun kun!... Chun kun!” A Chinese woman yells as she pushes a stroller that holds a greasy cardboard box through the streets of downtown Tijuana.

She stops as soon as someone shows interest and says out loud, “Chun kun! Pasele, pasele! Hay de pollito, vegetal, o camalón.” (“Come on through, come on through! There's chicken and shrimp.”)

Chun kun is what people in Tijuana (and other parts of the world) call fried spring rolls, or egg rolls. The term comes from the proper hanyu pinyin, which would be chun juan (春卷) — literally, “spring” and “roll,” according to a few online sources.

In the past decade, the Chinese population has reportedly more than tripled in Tijuana. An article from 2012 on SanDiegoRed informed that there were over 15,000 Chinese immigrants living in the city, a number that has most likely increased in the past three years.

Most of the Chinese people in Tijuana are reserved and introverted; they tend not to mingle much with society. The increasingly large population of Chinese people means that Tijuana should have its own Chinatown, like Mexicali's La Chinesca, but in Tijuana they still seem to be not so integrated into society.

Regardless, Chinese tourism in Tijuana is booming. I see a couple groups of more than a dozen Chinese people crossing the border daily with a tour guide. They walk around town taking pictures and have lunch/dinner in tourist Mexican places. The Shanghai-Tijuana flight takes less than 12 hours and flies three times a week. And if you look at a map, Tijuana is the closest Latin American city to China.

There are two Chinese general stores near my neighborhood where I like to shop for oddities and furikake (rice seasoning), which is not Chinese but the stores carry it anyway. There are usually only Chinese people in the stores and most things are labeled in Mandarin. For the most part, the store management shows no interest in offering help or even paying attention. At check-out time, the cashier yells out the price in pesos.

Other than that, I have seen Chinese people on the street exclusively with other Chinese people or on public transit. There are reportedly more than 30,000 foreign students registered in Tijuana's public school system, the majority of which are Chinese and American, so there is some integration that’s occurring now.

The Chun Kun Lady is a 31-year-old who moved to Tijuana three years ago. Compared to the rest of the Chinese population, she is not afraid to mingle with locals. Her Spanish is basic and her English is non-existent, so communicating with her is a bit difficult if you try to deviate from the topic of chun kun. 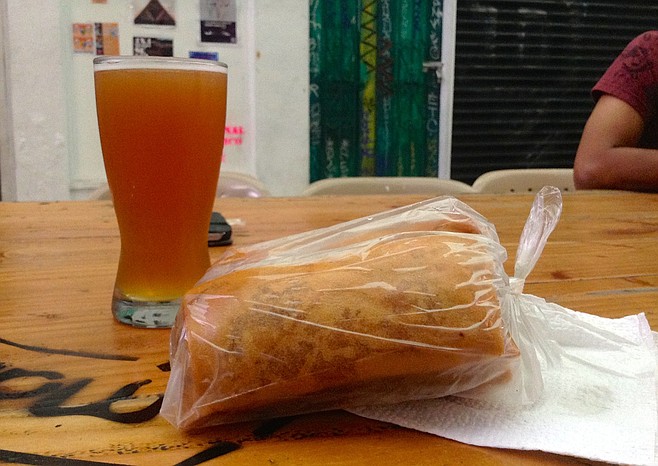 I was sitting in front of Mamut Brewery's original location in Pasaje Rodriguez on a recent Wednesday afternoon, enjoying a beer with fellow writer Chad Deal, when I heard “Chun kun!” hollered from a distance. Though I had just had lunch, I decided to buy four chun kuns from her if she let me ask her a couple of questions. When I told her I wanted to interview her because she was somewhat famous, she got shy and just said, “Tu no sabes!” (you don't know). I proceeded to ask more questions, but her answers were short, basic, and seemed to be lost a bit in translation.

She told me her name was “Leah” and wrote it down in Cantonese on the back of a book with a bunch of other sayings. Poking around the internet, I learned that she wrote her name as "Liang Yanfen." She also wrote "hello," "I want to make friends with you," ”chun kun,” and other characters that the internet did not help me to translate.

“Es mi familia,” Liang told me when I asked her what she thought about Tijuana. But then she said the same thing when I asked her why she moved to Tijuana from Guangdong, suggesting that she misunderstood my question in the first place.

“Mi mamá los hace,” she said; her mom, who doesn't speak any Spanish, makes the spring rolls. Liang said she eats chun kuns but refused to name a favorite: “Me gustan todos!”

“Tengo una hija!” Liang corrected me when I asked about her son, telling me that her only child is in fact a her, not a him. The first time most of Tijuana saw Liang selling chun kuns, a couple years ago, she was obviously pregnant. This inspired several friends to dress up like her for Halloween and rove the streets crying out, “Chun kun!"

Liang starts selling chun kuns in the afternoon at around five. They sell for 15 or 20 pesos ($1 or $1.30). Her walk starts from her house on Calle Ocho, takes her through Avenida Revolución, and then through the popular art alleyway between 3rd and 4th street, Pasaje Rodríguez. She goes all over downtown, including the red-light district of Zona Norte, but every hour she goes back to the Pasaje until it closes at around 11 p.m.

At night, she goes to La Sexta and enters all the bars, screaming ”Complenme un chun kun!” louder than the jukebox or even the live bands. She keeps selling chun kuns until 3 or 4 a.m. If she is selling a lot and runs out early, she walks back home, fills the cardboard box, and goes at it again.

There are all types of street vendors in downtown Tijuana, but there is only one Chun Kun Lady. Liang's chun kun calling is so popular that when she passes by, many people imitate her or randomly just yell chun kun later. 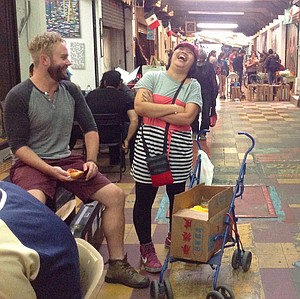 Chad Deal has a special relationship with Liang, owing to the fact that both have poor Spanish (Chad's is arguably more refined), which somehow allows them to communicate better. Liang always catches Chad in moments of drunken weakness, and he usually ends up buying several per night.

Lately, if Chad hears the chun kun yells, he hides because he knows Liang will beg him to buy an egg roll and he is helpless to decline, even if he isn't hungry. Liang's persistence is the stuff of lore. She will harass, harangue, and even poke you in the arm until you buy a roll. She even went so far as to corner Chad into buying a chun kun while he was in the middle of performing music at a bar on Sexta one night. Chad's weird camaraderie with Liang runs so deep that he calls my cat Chun Kun instead of by his real name.

However, more than anything, it is a testament to Liang's ubiquity that she was there howling chun kun! when I got my cat from Happy Vegan in the Pasaje last year. Chad claims that my cat looked like a little egg roll as a kitten, but the truth is probably much more Freudian and complex.

Chun Kun Lady is easily the most well-known member of Tijuana's Chinese community, and if you spend more than half an hour on Revolucíon on any given day, you will inevitably get to know her, too.