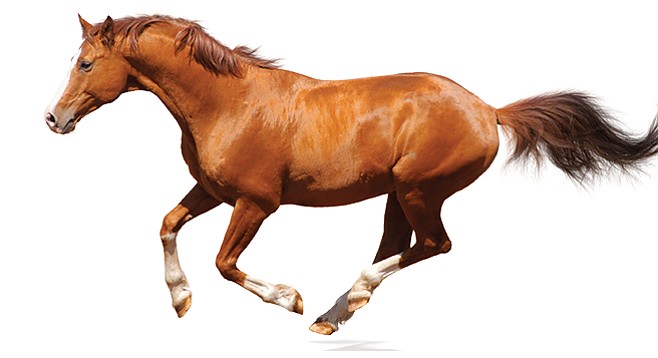 Triple Crown dreams begin with two-year-olds, and some of those dreams were for sale in Del Mar on May 28. If you want to buy a horse, specifically a thoroughbred, the action’s at the auction, and for the first time, it was here in good ol’ Del Mar at the Barretts sale.

It’s incongruous — as I make my way into the pavilion at Surfside Race Place — that’s the fancy name for the off track betting facility at Del Mar — there’s a steel drum band playing, two middle–aged guys who look like real estate agents, tapping out Caribbean tunes while backed by a recorded rhythm track. 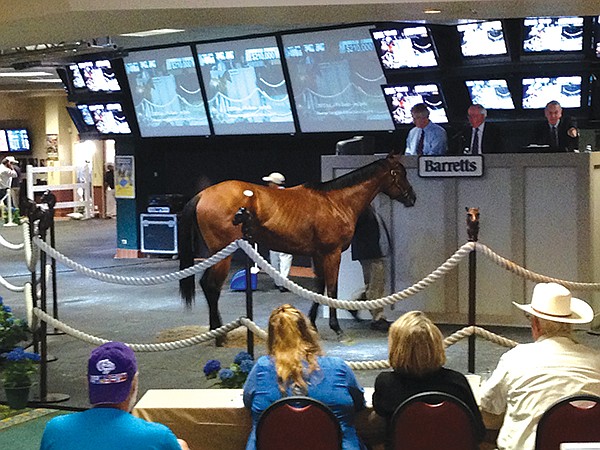 Inside, there are banks of video screens, some big, some small. Usually, it’s the site for horseplayers who haven’t made it into the internet age yet, or perhaps prefer the perverse camaraderie of the off-track betting parlor. It’s all about the futurity today — not that you can’t lose your posterior — because in the world of horse racing, the only thing riskier than wagering on a horse is buying one. But it’s open to the public, no charge, and the parking’s free — so what the hay.

I’m in time for #13, who enters the ring and appears to be a bit put off by the auction process. My wife chimes in, “She’d make a nice hunter; look at that beautiful confirmation.” A moment later, it’s runway time for #16, who takes a big dump. Not to worry, though; it’s all been rehearsed, and a little guy steps over nonchalantly, sweeps up the stuff and drops it into a big plastic bucket. I turn my attention to center stage, where three white-haired gents are perched at mikes on a raised podium; they’ve got on uniforms of sorts, each clad in blue blazers, tan slacks, and black shoes. From where I’m sitting, it appears that repp ties are de rigueur.

"The Auctioneer Song" by Leroy Vandyke

Ever heard the 1963 country song “The Auctioneer,” by Leroy Van Dyke? If so, the melodic cadence of chief auctioneer Ryan R. Mahan is just as you’d imagined it would be. Southern-inflected and smooth, the Kentucky-bred’s calls come cascading down an aural ladder with a hum and a rhythm. The sound of a live auction is old-timey, and for folks of the cell phone yapping and apping set, perhaps a touch archaic. But it’s old hat to the old hands on hand, the men and women who’ve come here to buy a race horse.

Serious buyer or not, Barretts has a nice sales catalog for you with lots of stats. Not so much on the steeds for sale, mind you, but on their kinfolk. Prominent in the catalog is the reference to “hip number.” Each of these guys and gals has an oval sticker with a number stuck on the hip.

These are two-year-olds in training, all unraced (with the exception of one or two sporting poor starts at Santa Anita in May) but with at least 60 days of work under their girths. Some have names, some don’t. A man in a tan cap, just over the railing in front of me, has placed the winning bid of $50,000 on a horse. Smiling, he fills out some paperwork.

There are rows of long tables arranged around a small sales arena, into which, from an outdoor ring, the stars of the show are led when it’s time. The sales enclosure itself is small, casually cordoned off from the attendees by a set of double, white braided ropes linked by faux-brass horse head stanchions. Should one of these specimens turn out to be of tornadic disposition, I hope the ropes will hold.

No doubt, some of these horses would rather be someplace else. Spirited neighing, kicking out of rear legs, circling in agitated fashion, it’s equine anxiety. Others are preternaturally calm, passive save for low-key curiosity.

The folks here look to be largely racetrackers, Thoroughbred owners and trainers, as well as an assortment of agents; cowboy hats, barn jackets, paddock boots and muck boots are the order of the day. And the new black Rolls Royce parked in the closest spot out front tells me that at least one member of the Rancho Santa Fe crew is in attendance.

Not many grays today, but lots of bays. The auctioneers hype the horses — try to boost prices — by referring to flashy timed works (for example, a furlong in 10 flat or 10.1) and big-time pedigrees; lofty lifetime earnings from graded stakes races and winning kin (sire, dam or sibs) are plusses. And you can watch the works on video, where an exercise rider at the helm takes the juvenile (as two-year-old Thoroughbreds are sometimes called) for a timed furlong or two without other horses to harry him or her. Although one hears of race horses being bought for millions, the minimum bid today, called the “upset price,” is $2000. But when certain hip numbers come up, the auctioneer can be heard trying to prime the pump by entertaining high bids (for example, $100,000) at the outset; he’s often forced to back down quickly due to lack of interest at six figures.

Of the 151 horses listed in the sales catalog, around 30 are withdrawn, including a colt by Pioneer of the Nile, sire of American Pharoah. [The May 28 Del Mar sale was held just nine days before the running of the Belmont, giving rise to conjecture that, pending American Pharoah’s fate in the third rung of the Triple Crown, Pioneer of the Nile’s progeny might skyrocket in auction value.] Ultimately, of the horses actually offered that Thursday afternoon, about three-quarters are sold, at an average price of just under $46,000. There’s quite a spread: $2500 for #8, filly Jackeeattackee, to $230,000 in the case of a colt with the peculiar name of Chicken Hawk.

Chicken Hawk, #65, is plucked by Dennis O’Neill, brother of longtime Southern California trainer Doug O’Neill. The latter is perhaps best known for conditioning I’ll Have Another, who, after winning the Kentucky Derby and the Preakness in 2013, was scratched just before the Belmont. O’Neill’s name, and the names of other successful bidders, is typed up and posted on the wall by the Barretts folks.

Some people are here picking up stock for their stables, while others are acting as agents for trainers or owners. Lots of cell phones, and overheard more than once, “We got ’im.” I spot Bob Hess, Jr., a conditioner who, despite looking like a George Clooney stand-in, is unpretentious. I phone him a few days later. I want to know why Chicken Hawk, the colt whose name evokes a bevy of less-than-salubrious connotations, had garnered the auction’s top price.

In the case of this March foal, Hess opines, “It’s not about the pedigree, which was nothing special, probably below average, but about athleticism. It wasn’t the time of his work, but how easily he did it. He’s got poise, a great demeanor; nothing bothers him. He has great balance and stride. He has a big hip, big shoulder (confirmation). He looks like a fast horse: He has the look of an eagle. But we couldn’t afford him.”

I ask Hess if he ended up buying a horse. As we speak, Hess thumbs through the Barretts sales catalog. “We really liked one, but there were chips in an ankle. We were disappointed. We didn’t want to buy into a problem.”

Barretts’ Lloyd is pleased: “We were taken by surprise by how many new faces were there and how much excitement was generated. The auction setting is the best way to bring new people into the game. We weren’t sure if folks would make the drive down from [the Los Angeles area], but it turned out that [the] Del Mar setting is a big draw. We’d like to make these sales ‘must-attend’ events where people will spend a couple of nice days in San Diego.” Bob Hess concurs, saying, “At the preview in the paddock on Tuesday we had probably triple the usual crowd, and at the auction, maybe 50 percent more than usual. Anytime you throw Del Mar into the equation…”

The next auction will be held on August 15 for yearlings — one-year-olds without timed works. With solely pedigree and confirmation on display, pinhookers (the term for folks who buy yearlings) will “have to use their imagination,” quips Lloyd.