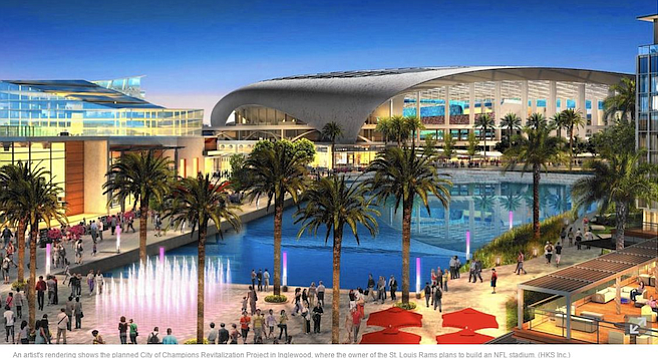 Will Walmart hubby take Chargers away?

A lot of hand-wringing is going on over at U-T San Diego, owned by wealthy Republican real estate mogul Doug Manchester, about a Los Angeles–area stadium proposal by Stan Kroenke.

"The St. Louis Rams owner saying he will build a stadium in Inglewood without the aid of taxpayer money is bad news for the Chargers," the paper reported in a January 5 play story. "Very bad."

"If it can be done there without public financing, the good folks of America’s Finest City will ask why the Spanos family needs $600 million of our money to build a stadium here."

But maybe not such bad news for the team-owning Spanos clan, the story continues. "It would give them a place to play if they can’t get a stadium built in the city they’ve called home for the past 54 years."

Good or bad, the long-running billionaires’ shuffle has been undoubtedly positive for clicks on the paper's website. But who is Kroenke to be having such potential clout over the financial fate of San Diego and its taxpayers?

The U-T doesn’t go into too many details, other than noting he's said to be worth $5.6 billion, "slightly higher than the $4.8 billion estimated net worth of his wife, Ann Walton Kroenke."

As it turns out, the would-be L.A. stadium guru has been described as a husband who owes the beginning of his fortune to his wife, who in turn is an heiress to the Walmart billions.

"Ann Walton Kroenke is the quiet half of a billionaire power couple," says Forbes, which ranks her at 96 on its list of 400 richest Americans. "Her husband Stan owns and is more closely affiliated with their highly visible sports franchises, including the NBA's Denver Nuggets, the NHL's Colorado Avalanche, the NFL's St. Louis Rams and the Premier League soccer club Arsenal.

"Ann also inherited, along with her sister Nancy, their father James ‘Bud’ Walton's Wal-Mart fortune. Bud cofounded the retail giant with his older brother Sam in the 1960s, and when he died in 1995 he left each of his daughters enough Wal-Mart shares to make them billionaires."

In a December 2013 feature about Kroenke's string of supersized mansions, horse ranches, and miscellaneous real estate assets, the magazine notes, "Stanley Kroenke made his fortune in real estate developing warehouses and shopping centers, many of them used by Wal-Mart, which was founded by his wife Ann Walton Kroenke’s uncle….

“At 66 and worth an estimated $5.3 billion, he has these seven homes plus 1.5 million acres of ranchland in Montana, Wyoming and British Columbia, and several California vineyards."

According to the Walmart 1% website, "Stan and Ann met on a skiing trip in Colorado in 1971, and Stan was reportedly close with Sam and Bud Walton."

As far as campaign contributions, Kroenke has given to both Democrats and Republicans. In 2011 he favored Missouri Democratic senator Claire McCaskill with $5000. In 2006, he gave $25,000 to the National Republican Senatorial Committee.

In 2004, he backed Colorado Republican senate candidate Pete Coors, who in 2005 got into a legal wrangle with UCSD over his late father's will, as previously reported here, with $4000.

As land-hungry as Kroenke is, it's perhaps not surprising that his baronial reach extends even to San Diego’s border with Tijuana, though the local holding is a bit more prosaic than the flashy sports teams and entertainment venues he and his wife are most famous for.

The purchase by Kroenke's TKG Holdings of the San Ysidro Village shopping mall for $68.5 million in 2013 was the county's second largest retail real estate deal that year, according to a report by San Diego State University's Corky McMillin Center for Real Estate.

Tenants of the shopping center, which caters to cross-border traffic, include a Kmart, Marshall's, Ross Dress for Less, and a Subway sandwich shop.

Kroenke doesn't want to share his stadium with any other teams, so there may NOT be a place for the Chargers to play up there, which puts them right to square one here--except for the fact that 25% of their revenue may be lost as soon as the Rams move back to LA.

Wow, it's amazing how really rich people like to play out here. Who knew there is actually a journal hilariously named "The Walmart 1%?" Or that well-married Missouri-based Kroenke, when visiting Colorado, peculiarly used to stay in the Denver Nuggets' Pepsi Center? Or that Kroenke bought his Malibu home from the Egyptian lover of Princess Diana? Or even that our own SDSU business school is named after developer Corky McMillan who got the Naval Training Center for $1 and then built Liberty Station? That's a lotta amazement in one story.

This is a perfect example of the advantages to either marrying a rich girl or the boss's daughter (take your pick in this case.) I really doubt that he would have amassed that sort of wealth and influence on his own or solely by his own efforts. Absentee owners of ranchland in Montana and nearby states are not generally well-thought-of by neighboring local residents. The big-bucks crowd often fences off the land, which in many instances was more-or-less open and accessible to other users and uses--such as hunting and fishing--just because they can. It would be most interesting to learn more about this man and his varied ventures.

I don't believe negative truisms about rich/poor or June/January love matches or that regular guys are necessarily greener than oligarchs. I'd bet Mr. Kroenke and Ms. Walton were madly in love before they got hitched. I'm also sure that rich buyers of Montana real estate preserve their vast open spaces better than envious natives who sell off their mineral rights for exploitation at the first good fracking offer.