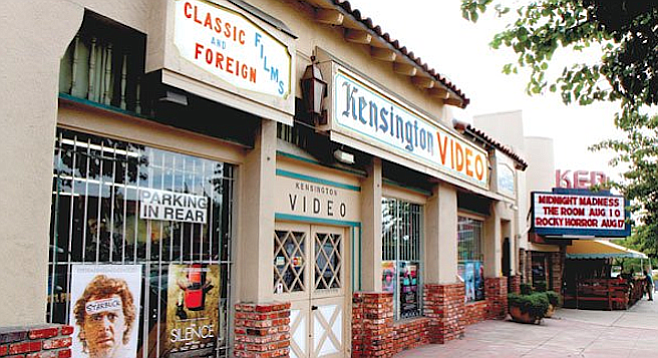 I guess the Hanfords weren’t kidding. All of our combined prayers to the gods of pressed polycarbonate plastic went unanswered. As first reported in these pages, Kensington Video — the best damn DVD store in all the land — will close its doors this Saturday, February 28.

That doesn’t mean you laggards in the crowd won’t have at least one more chance to bid Rich, Winnie, Guy, and Pam a fond farewell. The Kensington Talmadge Community Association is throwing the Hanfords a send-off party in honor of their 50+ years of service to the neighborhood and video lovers throughout the county.

The joint was jumping — packed with ghouls eager to pick shelves clean of their favorite sale titles — when I paid the store a mid-afternoon visit earlier this week. All four family members were busily scurrying behind the counter. Winnie was so flummoxed she could barely take a moment to crack wise with me. Requests for even a brief interview with the Queen of Kensington were met with, “Are you kidding? See me next week.” Well, it’s better than “Ask my agent.”

Were one to gauge a store on the amount of love and nurturing that went into it, you’re not likely to find a more passionate enterprise in all creation. At a time when friendly customer service is limited to a guy wearing a day-glo orange vest and endlessly recycling, “Hi! Welcome to Walmart,” the Hanfords and their knowledgeable staff went out of their way to provide blue ribbon treatment to all who walked through their doors.

Heresy though it may be, I’m going to miss this place something awful, almost as much as I would a fallen single-screen. How many gems would never have been unearthed were it not for my archaeological digs through their floor-to-ceiling back room stacks? Upon first discovering mecca in 2000, I would leave, arms laden with black plastic VHS cases. My late fees alone were enough to finance another wing. Never one to succumb to the allure of Netflix or VOD, I still found myself making fewer and fewer visits to our shrine to home cinema. In other words, I’m as guilty as the rest of you for its closing.

The gala will be held at 6:30 pm, Thursday, March 19 at the Kensington Community Church, 4773 Marlborough Drive. It’s only $12 per person and with it comes a catered dinner by Ponce’s. Seating is limited to 200, so book reservations early by visiting kental.org or calling 619-284-0162 no later than March 17.

Joining in the tribute will be the Kensington Social and Athletic Club, Garden Angels, Franklin School, Kensington Concert Series, and the Kensington Talmadge Planning Committee. There’s also a guy named Marks billed as “Special Guest.” (I feel like Cesar Romero on an episode of Batman.) Their initial request was that I do a few minutes on this year’s Academy Awards, but I can’t use that kind of language in a church. Besides, who needs Oscar when there’s Winnie to glorify?

Allowing for a giant leap away from my normally hard-hearted character, I’m calling on you for an outpouring of well-earned sentimental effusion. Let’s pack the pews to the point they’ll be need of additional 8:30 and 10:30 celebrations.

In case you might have missed it, here is my 2013 cover story on Kensington Video.