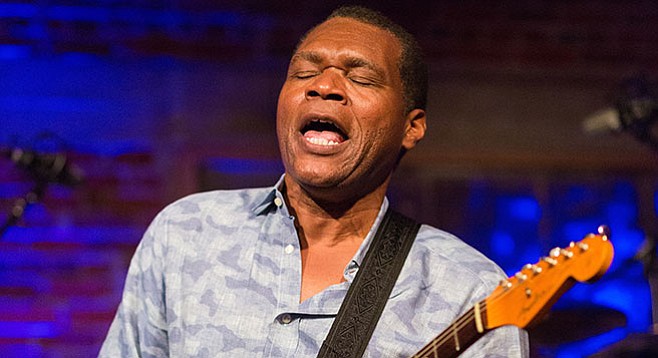 Blues slinger more of a singer?

Forty years of Robert Cray: all the while, some among us are waiting for that guitar of his to quicken into flames, rather than smolder like last night’s fire. Not a very heroic guitar hero, his playing lays chained to simple melody and is never given over to crowd-pleasing rips up and down the fretboard. Perhaps the greater appeal of Robert Cray is his voice, which has cured over the years into something approaching honey-glazed. That’s the stronger of his two instruments, in my opinion. Cray’s singing is a righteous proclamation that surely took stimulus (if not grit) from soul crooners such as O.V. Wright or Bobby Bland. Today, Robert Cray is an R&B vocalist ensnared in the body of a grandee blues guitarist.

But he’s not one to write off — Cray put the blues back into pop music radio playlists during the 1980s, and for a time, he was a fixture on the rock-concert circuit.

Born in Virginia, Cray hooked up with Curtis Salgado in the late 1970s; the band became a club favorite in Oregon and landed on the radar of the actors who would later become the Blues Brothers, John Belushi and Dan Aykroyd. They gave Cray a cameo in Animal House (playing bass), but he wouldn’t break out big time until the early ’80s, when his Strong Persuader earned the first of Cray’s five Grammy awards.

A performance I’ll not forget is the quiet guitarist paired with Shemeka Copeland, a fire-and-brimstone blues shouter if ever there was one. A heavyweight facing off against a flyweight (in terms of volume) is what I believed was going to happen, but no, Cray stood his ground and came away unscorched. Simple and dignified, he got the job done, and by the end of the gig I realize that Robert Cray’s greater skill was that he had somehow sidestepped his way around the multitude of blues clichés present that night.