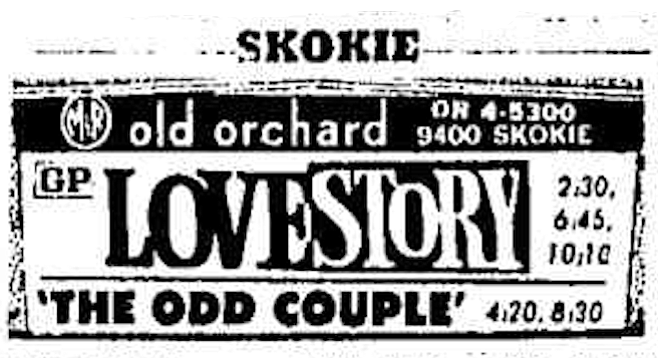 WARNING! The double-features you are about to see are real! No titles were Photoshopped during the making of this post!

It began as a hunt to find proof of what has to be the craziest double-bill ever conceived. The date and year escape me, but at one point in its history the programming wunderkind who booked Chicago’s Devon Theatre married two films so incongruous, so unlikely, that I’m still obsessing about it decades later. One day I’ll find the ad that bears witness to the coupling of Marcel Ophüls’s four hour Holocaust documentary The Sorrow and the Pity and Carl Reiner’s scabrous incest romp Where’s Poppa? (If memory serves, TS&TP was also paired opposite A Thousand Clowns. Nonconformity and Nazis. Incongruity, anyone?)

Until evidence of that holy grail of matinee-madness appears to me in a future search, we’ll just have to make do with these 30 or so nightmare pairings let loose on the paying public.

Obviously the artful programming work of a strict Freudian deep in the throes of Koro syndrome. Chicago Tribune, August 11, 1971.

Perhaps it was the closing shot of The Duke walking hand-in-hand into the sunset with the young Vietnamese refugee that tugged at the booker’s heartstrings, thus prompting the pairing. Chicago Tribune, Oct. 9, 1969.

More like lasts 2 days. A Hollywood superstar’s career slowly dies before our eyes, but not before willingly subjecting audiences to a mawkish, hideously shot, directed, and designed, depressing as all get out, and void of any cinematic refinement crowd pleaser. Also on the same program, I Never Sang for My Father. Chicago Tribune, May 10, 1972.

Everything goes great when served with rabid mastador!

A couple of firsts and lasts: the only Scorsese picture to take place from a woman’s point-of-view paired with Duke Wayne’s lone foray into blaxploitation. I can still hear the theatre owner screaming at his booker: “What did you do? What did you dooooooooo?” Chicago Tribune, May 10, 1975.

Mommy dear, tell me please what makes these films belong? What does magician Cesar Romero, have to do with this maudlin song? Little one, there's no need to wander too far. For what you really seek is right here where you are. Chicago Tribune, Feb. 12, 1965.

Swingers’ Paradise may sound like a documentary account of Liz and Dick’s off-screen activities when in reality it’s A Hard Day’s Night knockoff showcasing British pop sensation Cliff Richard whose act never caught on in the States. Chicago Tribune, Oct. 8, 1965.

East screen: When two box office superstars go after the same audience, they usually end up shooting each other in the back. Chicago Tribune, July 21, 1967.

A brilliant scientist restores the beauty of a stripper horribly disfigured in a car accident. First off, it’s Atom Age Vampire, not what the hard-of-hearing copy editor wrote down. Second, now that I hear the plot, this actually isn’t that horrifying a double-bill after all. Chicago Tribune, Sept. 8, 1963.

How I spent my 10th birthday. Mom dragged me along with 8 friends to see this violently insane combo of the Beatles’ less successful follow-up to A Hard Day’s Night and Jimmy Stewart’s nadir. Nothing about Shenandoah held my interest. (Still doesn’t.) I wasn’t always a purist. Once the Beatles were through so was our attention span and us kids spent two hours running back and forth to the lobby refilling the squirt guns mom gave us as party favors. Chicago Tribune, Oct. 8, 1965.

Fill your hand with chocolate, you son of a bitch! Come with me and you’ll see a booker’s world of no imagination. Chicago Tribune, August 11, 1971.

The very thought of Otto Preminger playing alongside dreck like this sends chills through my willpower. Chicago Tribune, May 22, 1964.

Not even Fat Jack’s agent’s mother-in-law could have whipped up a combo like this. Miami News, July 3, 1966.

Audiences flocked to the North Avenue Outdoor to see an early appearance by Jack Kevorkian, while cineastes headed north to the Harlem to catch John Wayne, Capucine, and Fabian in what very well could be the most simplistic view of male-female relationships ever committed to film. “Children Under 12 Free,” but cover their little eyes during the Swedish sex stuff. Chicago Tribune, Oct. 23, 1964.

The first film was mysteriously yanked from distribution right after the war, while The Nazis Until Late 1942 remains one of Bob Hope’s better service comedies. The Shelter Island Lutheran Picayune, June 8, 1946.

I've seen Beneath the Planet of the Apes and there's nothing remotely adult or entertaining about it. As for BVDs, there was no need for in-car heaters. Chicago Tribune, Nov. 1, 1970.

Wish I could get the arrow to work, so that I could see the 30 ads for the double features!

Not sure why, but some time ago this function stopped working (even the top banner for selecting articles)!

What browser are you using? It works for me with Chrome, but not with IE. I didn't try it with Firefox, though.

If you click on the box it should enlarge and make it easier for you to click through. If not, try it on Chrome or Safari. I hope you can make it work. If I do say so myself, this is some funny stuff.