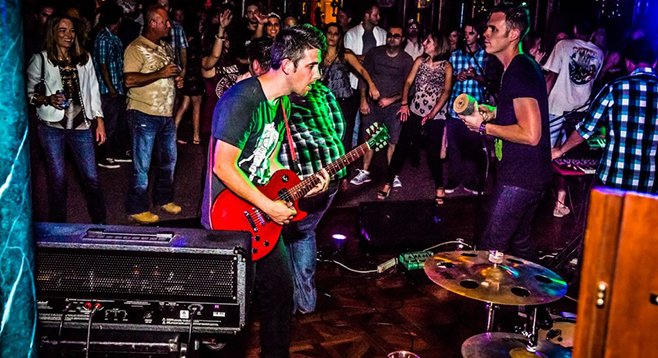 On Friday, September 12, the Mission Bay–based classic sternwheeler William D. Evans will be transformed from a wedding and meeting venue into a floating concert, the second annual Rock the Boat festival. The brainchild of organizer and O.B. resident Jonathan Savage, who is also bassist with tribute band the Red Not Chili Peppers, the inaugural 2013 four-hour cruise sold out, raising $3000 for the MARSOC Foundation, an organization that offers support to active-duty and medically retired Marine personnel and their families.

This year’s event is a fundraiser for the Encinitas-based charity SurfAid, with up to 500 concertgoers set to enjoy performances from local acts Seedless, Katastro, the Concrete Project, Barbarian, the Broken Stems, and Franklin Manor, with deejays Gina Cat and Man Cat providing between-band sounds.

Savage is looking for nothing in return other than the satisfaction of helping others. “There are just so many organizations that can use help and I thought this would be a unique way to get the community involved,” he said.

Savage notes consideration was given to competing events when selecting performers. “I try to do a variety of different styles,” he said. “This year with San Diego Music Thing taking place on the same weekend, I decided to try to appeal more to the beach crowd.” Music takes place on two decks with bands alternating and lights by Matt Collier of Brother’s Gow. “This transforms the event from just bands on a boat to feeling like you are at a top local venue.”

Savage is hoping to continue this as an annual happening, with a different charity benefiting each time and he’s pleased to have the support from the boat’s owners, the Bahia Hotel.

“This time I worked directly with them to put on the event,” Savage said. “In 2013 I was just a client. I paid for the boat up front and did everything on the back end. So, I could get whatever day I wanted. This time was a little bit easier on me, financially, to use a date they chose.”

For their part, Bahia Resort Hotel would be happy to see this annual event continue, “if everything goes well and everybody behaves,” joked Julia Geis, the venue’s media relations manager. “We’re always interested in hosting unique events and supporting the community and charities,” she said.

According to Savage there were no problems last year, not even seasickness.

“Even people that I convinced to go on who have those issues didn’t have a problem. You can barely even tell you’re moving; it’s calm on the bay and it’s a large ship,” he said.