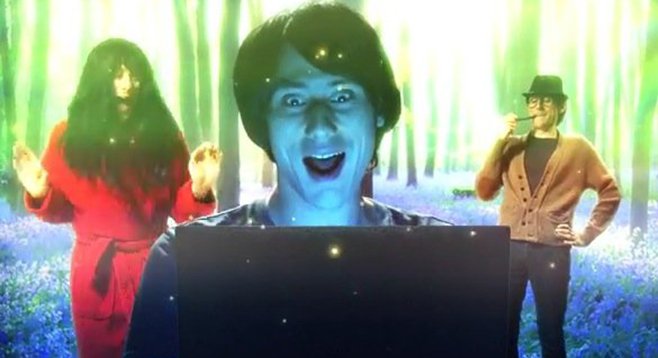 Transforming opera? I think not

14 artists who are not exactly Wagner.

This Huffington Post article about 14 artists who are transforming the future of opera has been crawling around my Facebook and Twitter. First of all, we get the "grand opera is dead" discussion from the author, followed by a reference to falling asleep in middle school during a La Boheme field trip.

The tone of a lot of these writers is that most people fall asleep at opera and symphony concerts. They write as if music halls are napping facilities. This worn-out, trite, pedestrian joke is as old as classical music itself, just ask Haydn. To read yet another article that references "opera napping" makes me start to yawn.

Let’s get one thing straight, none of these 14 clips are opera. Not even close. In fact, it’s all I can do to maintain a civil tone.

All of these clips are “creative”, some less so than others, but not one of them has the rigor to be opera. The thing about opera is that it's effing hard... Hard to create and hard to perform. And yes, hard to sit through when it's mediocre.

Every single one of these clips is mediocre and I could barely make it through a few minutes of them. What would it be like to sit through two hours of one these? I have no words.

I like the mushroom guy’s voice but it's miked and recorded and therefore subject to any number of manipulations. Opera is always unplugged.

As Greer Grimsley once said, “Microphones aren’t part of the artform.” All of these clips are miked which makes none of them opera.

There, that was a civil tone, but I find it necessary to take the gloves off and go bare-knuckles for a while. These “artists” are transforming the future of opera? Their bowels also transform delicious food into big steaming piles of you-know-what.

These people are transforming opera? They don’t have the juice to transform opera. It would be like me claiming this column is transforming the future of musicology. It’s just not true.

Let’s talk about something that actually transformed music. Better yet, let’s allow Stephen Fry to talk about it, in the embedded video.

The Two-headed Calf's opera in two parts: You, My Mother

Here’s one of the 14 artists who are “transforming opera” now, also embedded.

This piece defines itself quite well when she says, “I’m kind of sleepy and uninspired...”

Wagner had the ability to change opera and music forever. The people in this Huffington Post piece do not.

I can already hear a few arguments. “Well, people thought Wagner was terrible when he wrote his operas. How is this different?” It’s night-and-day-different and we’ll talk about that soon.

Another argument might throw up freedom of expression as a virtue. “Would you rather have the censorship of Stalin and Hitler instead?”.

First of all Stalin and Hitler are names which should not be used lightly considering the scale of their atrocities but would I prefer some censorship?

Short answer? Yes, yes I would but I think the extreme obscurity of all these “artists” is censorship enough and we’ll definitely talk about that soon too.

How is the music of Wagner different from those featured freaky new artists getting grants and having their work put up on Huffington Post?

Well, great that you ran the contrasting transcendent video of erudite Brit Stephen Fry exploring the so-called "Tristan Chord" with German pianist Stefan Mickisch who played Wagner's "Tristan and Isolde" on Wagner's own 1876 Steinway in Wagner's own house. It was just beautiful.

I would say the main difference between the music of Wagner and the 14 in the Huffington Post is that he was firmly in the German tradition of music from Beethoven through Weber to Wagner and then he transformed that tradition in way that some think was even more influential than Beethoven. The 14 aren't in a tradition in the same way so I think the article title is misleading because they aren't really in the operatic tradition. They all appear to be uniquely their own thing. I'd say they're transforming YouTube more than they're transforming opera.

Thanks for that serious response to my question. Will you be a regular Readerwriter? Can you tell us something about yourself? We have missed retired classical music writer Jonathan Saville, so it is wonderful to have someone erudite writing on this subject again.

Yes, I'm a regular Readerwriter. I miss Saville also. He always wrote the truth. About me? I studied philosophy but also took a lot of music courses. I've been a regular in the San Diego Opera chorus since the 2000 season and I used to work in this place called Tower Records where people gathered and argued about the best version of Bruckner's 7th.

Be still my heart: do you mean the still-lamented, long-gone, swabbie-filled Tower Records on Sports Arena? And you've been singing with the excellent San Diego Opera chorus? (Two estimable organizations, but both are defunct, so I'm starting to worry about your employment status.) But no, you're the Reader's classical music writer now, so that's good for you and a boon for us. The boss should know the people are thrilled.