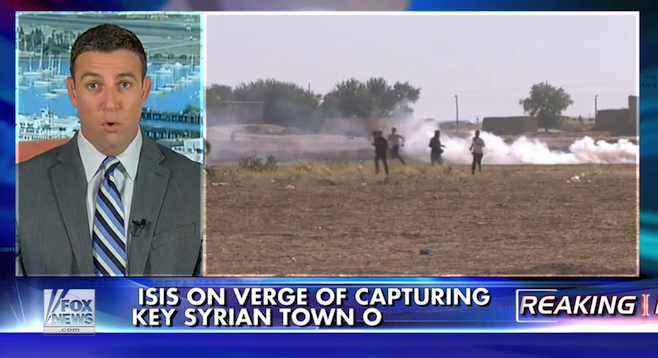 The Department of Homeland Security strongly challenged Rep. Duncan Hunter's assertion on October 7 that ISIL fighters have been captured while trying to enter Texas across the border with Mexico.

Department of Homeland Security spokeswoman Marsha Catron said, in a written statement, that: "The suggestion that individuals who have ties to ISIL have been apprehended at the Southwest border is categorically false, and not supported by any credible intelligence or the facts on the ground. DHS continues to have no credible intelligence to suggest terrorist organizations are actively plotting to cross the southwest border."

On Tuesday's Fox News program, Hunter told Greta Van Susteren, "I know that at least 10 ISIS fighters have been caught coming across the Mexican border in Texas."

Hunter said that he learned this from sources in the Border Patrol, which captured the Islamic militant fighters, then added, “You know there's going to be dozens more that did not get caught by the Border Patrol."

Inquiries to the Border Patrol were directed to the parent agency, the Department of Homeland Security, which strongly denied Hunter's statements. A spokesman for the National Border Patrol Council, the union for about 17,000 Border Patrol agents, said they hadn't heard about the alleged incidents. He spoke only with the agreement he not be named.

No one had reported such detentions to the union and no bulletins to be on the lookout for ISIS fighters have gone out to patrol agents, he said, noting they had antiterrorism training as part of their training and refresher courses.

Hunter spokesman Joe Kasper said that Hunter maintains that what he said is true.

"A high level source informed the congressman,” said Kasper. “It was also said that [the Department of Homeland Security] is actively discouraging any talk of IS on the border. The congressman was conveying what he knows — and what he was told."

Hunter has been a strong proponent for securing the border, advocating for stronger enforcement and more spending to build fences along the 2000-mile border with Mexico. A bill he introduced in 2011 remains stalled in the house Subcommittee on Border and Maritime Infrastructure.

Hunter has tangled with the Department of Homeland Security before, including when he released previously unreported information about a number of incursions by Mexican police and military into the United States — information he had to file a Freedom of Information Act request to obtain.

"It makes sense that the left hand of DHS doesn't know what the right hand is doing — it's been that way for a long time and we don't expect that to change," Kasper said.

"The suggestion that individuals who have ties to ISIS have been apprehended at the Southwest border are categorically false,..." Does that mean that none have tried to cross the border, or does that mean that they have and none of them have been caught?

More ISIS hysteria. Not surprising that Hunter is feeding into it.

Of course with elections coming up it's better to be remembered for being "tough" on ISIS then for shutting down the government twice.

Of course ISIS influenced "fighters" are here. Did they cross the border? Unlikely. The terrorists are here and in the very communities that we are "fighting" for. So far they have been stupid and we have been lucky. They will be successful one day it is just a matter of time. Our men and women have died for nothing and any so called gains in the Middle East will crumble as they continue their religious civil war. The Republicans can't wait for control of Congress so they can send more good Americans to die and bleed for nothing.

The truth is that our men and women are dying in order for the war profiteering corporations to do just that, profit from war.

While corporate public service announcements proclaim their love of the troops what goes unsaid is that they are making money from every death. And as a society we buy into it.

And in other news, Generalissimo Francisco Franco is still dead.

ISIS doesn't have to send fighters. All they have to do is arm the thousands of pissed off raza who've been screwed a million times over by an inept and rapacious US government.

Is he saying, "Ooooooooooh."