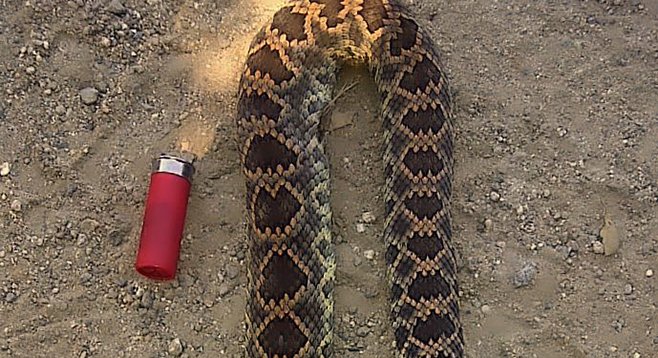 One rattlesnake, skinned and cleaned

This recipe has a special place in my heart, mostly because I personally shot this rattlesnake as it was attempting to attack me while I was dove hunting in the mountains near San Diego. I spent the day wandering about various clearings, gazing into the sky, looking for doves, and not really paying attention to the ground where I was walking. I know, rookie mistake. Because it is prime time for rattlesnakes here in Southern California and I should have known better.

I noticed some birds using a ridgeline as cover and decided we should cut across a small hill to reach the area. As we began to climb up the hill I had an odd feeling. I looked to the ground cover and thought, This would be a great place to live if I were a rattlesnake. I should probably keep an eye out. I had taken no more than two steps over the crest of the hill when I saw it. Our eyes met; each of us startled the other, and we both flinched.

I jumped back in the air as I raised my shotgun to the shooting position. The snake zig-zagged back into an attack position, its rattler buzzing frantically. The snake made a dash toward the right side of me. Honestly, I do not know if the snake was maneuvering for a better attack position or if it was simply attempting to escape. I was not going to take any chances. I shot…not once, but three times. My three-shot barrage landed one round in the middle of the snake. I saw it curl up, moving side to side in a ball. I could not tell if it was dead or alive. My hunting partner had no idea what had just happened, and I took a minute to fill him in. 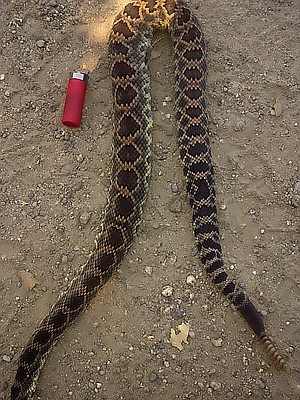 The author made a wallet for his wife from the skin.

After a few moments, the snake’s movement ceased. I could not see the head to make a confirmed kill shot so I stretched out the snake with the barrel of my shotgun. All the emotions set in when I saw the length. The snake easily measured almost four feet. I removed the head and buried it as a safety precaution. I examined the rattle, which was nine rattles in length. A decent-sized snake of good age. The day of dove hunting ended abruptly.

I cleaned the snake and packed it on ice for the trip home. After all, I was raised not to waste game.

After a lengthy discussion with my wife about eating the snake, she decided not to kiss me if I chose to eat it. Putting all that aside in the name of adventure, exploration, and my morals, I decided to make a soup. This soup is based off of traditional turtle soup but with the snake instead. This recipe is the result. For those wondering, my wife did kiss me after I ate the soup…it just took a couple of days.

The next day, bring 4 cups of water and ¼ cup of lemon juice to a boil. Add the snake and the marinade, reduce heat and simmer for I hour. Remove the meat and let cool. With a fork, strip the meat from the bones. Be careful of the rib bones, they will easily separate from the spine and can be a choking hazard. Pick through all the meat to find any bones. Chill meat until the soup is prepared.

In a small pot, add the diced onion, chopped garlic, olive oil, salt, thyme, Cajun seasoning, and bay leaf. On medium heat, cook the mixture until the onions become clear. Add the tomato sauce and beef stock to the pot and reduce by half (about 15–20 minutes). Strain the mixture into another pot, discarding everything but the soup. Add the snake and simmer for 30 minutes. Serve and enjoy.

What a moron. I guess the most surprising thing about this article is that an author this stupid could actually communicate in unbroken English. Number one: Put away the shotgun. If you need to fire three times to kill a four pound animal, you don't need to be carrying it. Number two: Take at least a middle school level biology class, so you won't be entirely clueless, which you currently are. Number three: Stay away from nature. You are bad for it, and you don't understand it. Number four: Don't write any more articles. Better to remain silent and be thought a fool than to open your mouth and remove all doubt.

I know guys like this. They are cowards. This guy had to kill the snake because it exposed his cowardice.

Ya'll better listen up! This article is right on the money. For those of you defending that evil snake think about this - what if the snake had arms and could carry a gun? You think it wouldn't do the same thing to him??? Ya'll better recognize!

Where I come from, PETA stands for People Eat The Animals!

Brothers and Sisters! Let us first take a moment to reflect upon the legacy of our lost serpentine brother. He died as he lived, with the passion of the sands and the love of his fellow creatures. Mourn not the loss of the fire in his eyes when gazing peacefully across the valley of his beloved scrub brush. But remember the glory of his domain and the intensity of his life. Our dearly departed reptilian recluse truly lived!

Let us celebrate the glory of nature and be at one with the snake. Let us embrace our prehistoric reptilian form, from which all men hath grown. Let us hold dear our ancestral scales and fangs from which the poisons of fathers first dripped. From now until the sun sets and we enter the sacred metabolic lull. Praise the sun! Animalia Chordata Vertebrata Reptilia Squamata Serpentes Viperidae Crotalinae! Amen!