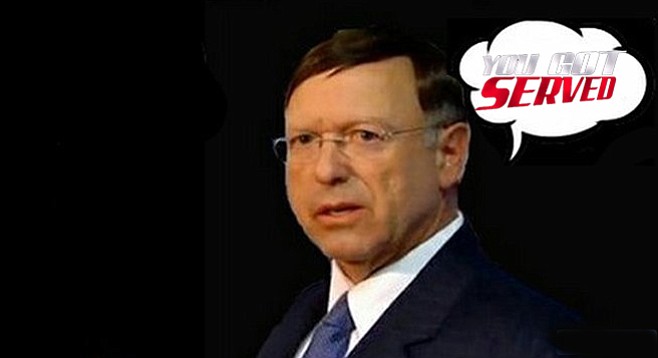 San Diego's top attorney continues his mission to discredit the authenticity of advocacy group San Diegans for Open Government. Last week, the city attorney's office issued a handful of subpoenas to several group members, ostensibly to poke holes in the nonprofit and thus gain an advantage in their lawsuit that challenges Business Improvement Districts.

In recent months, as the city and Cory Briggs — attorney for San Diegans for Open Government — grapple over high-profile cases, Goldsmith and his attorneys have seemingly looked to find proof that the nonprofit is not about justice but instead is a tool to line Briggs' pockets.

The city attorney has demanded to see contracts, membership dues, or anything else that shows the group is what it says it is. Most recently, Goldsmith and deputy city attorneys have tried to show that the group's members, if in fact they are members, are without legal standing because they do not own businesses.

The argument is not new. In fact, San Diego Superior Court judge Ronald Prager has shot down this argument on a number of occasions, most recently in an August 1 ruling.

"...[A]s this court has perviously stated, [San Diegans for Open Government] has established that it has standing to pursue this action on grounds unrelated to associational standing. Thus the city has failed to establish the relevance of the discovery it seeks especially in light of the fact that [the group] has already disclosed the names of certain members and has indicated a willingness in the past to provide further information subject to a protective order."

"Last Saturday morning while at home I was served a subpoena to produce documents and testify as a witness by the City Attorney's office on December 3, 2014," wrote Mat Wahlstrom, part owner and manager of Roberts Electric Services. His company is based in Hillcrest and a member of the Hillcrest Business Improvement District.

Wahlstrom joined San Diegans for Open Government after years of fighting what he calls a corrupt assessment district in Hillcrest.

"It was my first time being served, so I assumed that the city attorney was finally responding to my many email allegations about the Hillcrest [Business Improvement District] and its numerous violations, including misappropriation of parking funds and charity fraud. But, silly me, it appears it's just the city attorney trying to intimidate now-exposed individual members of San Diegans for Open Government, whose identities attorney Briggs was keeping secret for this exact reason."

But the strategy may be the city's only shot. One of many obstacles is that deputy city attorneys will be forced to argue against their office's 2012 legal opinion that found substantial holes in the law. That opinion pinned the problem on Proposition 26, the state amendment that requires a public vote on any tax that benefits the general public. In order for an assessment to be considered legal it must benefit only those who pay into the district.

"[H]istorically, the city could impose these business-based assessments so long as the city found that the businesses would benefit and the city complied with the applicable notice, hearing, and protest procedures set forth in the respective State statute. However, since the passage of Prop 26, unless the City can identify an applicable exception, the City may be prohibited from levying any new or increased business-based assessment without voter approval," wrote deputy city attorney Adam Wander in a July 27 opinion.

The attorney concluded that unless the laws governing assessment districts are changed, the city should refrain from approving any new business-based assessments.

"Absent clear direction from the courts or legislature, this Office advises that the City should not impose a new business-based assessment without voter approval unless the program of improvements and activities to be funded by the assessment can be limited to benefits or services provided directly to the charged businesses and not to others who are not charged.

"One could imagine the difficulty in attempting to quantify how much special benefit accrues to the assessed parcels versus how much general benefit accrues to the general public for improvements and activities like decorative streetlights, public benches, sidewalk cleaning, security patrols, or neighborhood signage. Yet, if such analysis is determined to be insufficient by a court, it is ultimately the City that is liable."

In the memo, Wander went on to suggest property owners form private associations.

"This private association approach would eliminate all risk to the City and its General Fund."

The trial is scheduled for January 27.

Can we all volunteer to be members in "San Diegans for Open Government" so Mr. Goldsmith has plenty of people to investigate?