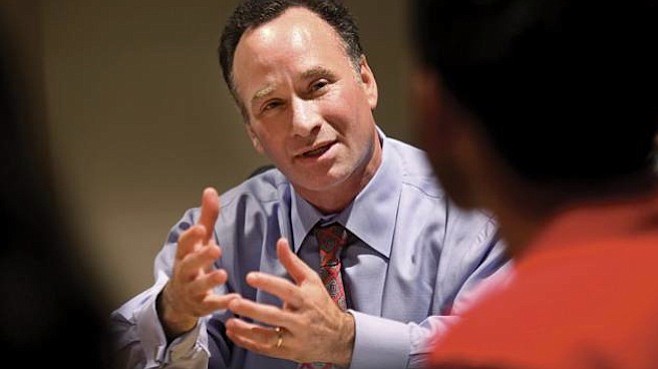 To hear California university administrators tell it, times are tough all over.

Pleading incipient poverty, the University of California is seeking to raise tuition 5 percent a year for five years, and some California state universities, including the one in San Diego, have already imposed a new "student success fee," maxing out at $200 a semester.

In a written statement, SDSU president Elliot Hirshman said the fee, hastily imposed this past spring, “stems from limited resources," according to a March 15 report in U-T San Diego.

"He also said the university will establish a hardship fund for the coming year to ensure that 'no student has to leave San Diego State due to increased fees,'" the story added.

"The president was in Las Vegas attending the Mountain West basketball tournament and was not available for comment."

One California State University resource that appears to be relatively plentiful is money for administrator salaries, including a tidy pending raise for Hirshman.

Next week, according to a university trustees agenda for the meeting of November 12 and 13, Hirshman is set to get a $12,000 boost to his already handsome yearly taxpayer-furnished pay of $350,000, which is supplemented by an annual $50,000 from "foundation sources," bringing his new combined salary to $412,000.

"This will be the first salary increase for executive positions since July 2007," explains a memo to the board from chairman Lou Monville, chancellor Timothy White, and vice chancellor for human resources Lori Lamb.

"The base salary adjustments for the individuals listed below are recommended for trustee approval effective July 1, 2014 or on the date of hire, whichever is later," the memo continues.

"Chancellor White will continue to evaluate equity and market issues related to executive compensation and will bring further recommendations to the Board at a future date," the memo adds. "Chancellor White believes it is important to distribute the current salary increases evenly, given that this is the first salary increase the executives have received since 2007."

Hirshman's new base pay of $362,000 would top the list of CSU campus presidents, with San Luis Obispo's Jeffrey Armstrong close behind with $361,400, though Armstrong only only gets a foundation supplement of $30,000.

When Hirshman was hired in July 2011, his then-record $400,000 salary — $100,000 more than his predecessor Stephen Weber's, according to a Los Angeles Times report — was widely criticized, leading governor Jerry Brown to ask CSU trustees to reconsider the move.

"The assumption is that you cannot find a qualified man or woman to lead the university unless paid twice that of the Chief Justice of the United States," wrote Brown. "I reject this notion….

"These are difficult times and difficult choices must be made. I ask that you rethink the criteria for setting administrators’ salaries."

The newly reelected governor’s reaction to the latest pay moves remains to be seen.

Meanwhile, Arizonan Janet Napolitano who is now Chancellor of the University of California, has warned she cannot continue the moratorium on tuition increases without more state aid and she will be raising student tuition starting again next fall. I'd say Governor Jerry Brown ought to do something about these abuses now that he's got his unprecedented fourth term in office. Like how about rollbacks?

Small correction: Napolitano is the president of the UC. Campus heads in the UC are called chancellors. It's just the reverse in the CSU system. We all must wonder why someone like her was hired to head the UC system. What were the regents thinking?

That last gig, with Homeland Security, wasn't anything to be proud of, and she carries other baggage too.

But don't ALL politicians/political appointees (at both parties) carry baggage we wish they didn't have? It goes with the territory. We often have to hold our nose when we vote.

You raise points that should be understood by everyone. The CSU system, along with the UC, has always tended to cry poverty. But in recent years there was some reason for it. The result was, that in an economic downturn when many jobs were lost and household incomes fell on average, the tuition went up a great deal, and alarmingly quickly.

So, now that Brown tells us that the state is back on its feet financially, you might assume that tuition and fee boosts will stop for a number of years. Ah, but that isn't the case, and Hirshman's princely salary is now deemed insufficient. Pain is borne by the struggling students, but not by the Pres. The campuses still need more funds than they are getting, and this pattern will likely never stop of itself. If it stops it will be because somebody or somebodies put a stop to it. The Guv would be a really good place to start looking for that sort of action.

One good step would be to freeze the salaries of all the campus heads and the chancellor, head of the CSU system. Then a ceiling of, say, $350K could be put in place. None of the academics in those poositions are worth even that much. They get it because they are good at playing the salary comparison game, wherein they keep comparing themselves, and convince the board of trustees that something higher than the last person hired must be offered to the next one. Tax supported universities should not attempt to match the salaries for anyone, whether administrators or faculty, paid by a handful of rich, top-tier places, such as Harvard, Stanford, et. al. Yet that's exactly what they do, and have been getting away with it for years.

Final point, Matt: I would not call a 3% salary boost "fat." When I read the headline I was expecting something like double or triple that much. Perhaps in times like these, we need to redefine "fat" when talking about pay boosts. I will say that Hirshman's salary in total is plenty fat, and that he could take a leadership role by refusing any increase while tuition and fees are still increasing. Nah, nevahappen!

I'm sure that Cal Berkeley's massive debt ($400+ million) on their rebuilt (and still not completed) football stadium has to be a bit of a concern as well.

Why on earth somebody picked Janet Napolitano to head our UC system is mysterious-to-suspicious. When she was the enthusiastic head of Homeland Security, she was responsible for unprecedented numbers of deportations of undocumented Latinos, breaking up families and causing long-term hardship. Now she runs UC which has large numbers of striving aspiring Latino students? This gives me cognitive dissonance. Also, Napolitano took the UC job at a salary lower than her male predecessor's which makes her a poor role model for women seeking high-level jobs.

Governor Brown owes us something positive for public education in his last term: he can get rid of Napolitano, roll back the lavish executive compensation across the UC system and establish a four-year moratorium on those killer tuition increases.

I have a difficult time figuring out what goes on in the selection process for UC regents, but IMO, the all-time worst was Barbara Bodine.

Oh, boy. You can find some strange things to complain about. Those UC (and CSU) administrators are all paid handsomely, and many of them have underperformed (such as Robert Dynes, UCSD chancellor and later the president of the UC.) For once there is a reduction in the pay of one of them, and that's a "poor role model for women?" Sheesh.

Does anybody know exactly what Hirshman does on the job to justify the $400,000 salary? I'm sure he'll never tell us.

Nobody thinks the less-than-men's-wages salary structure is a strange thing to complain about, Visduh. High-profile women taking high-profile jobs should require the same pay as any male predecessor, period. And if they happen to be Queen or Chancellor or President of UC, they should not turn around and slap UC students' families with tuition increases.