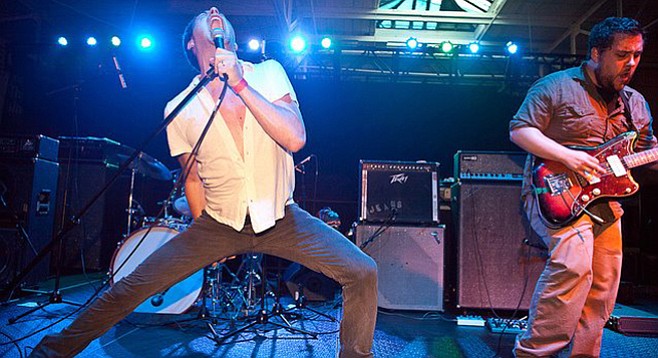 What do Trumans Water, Pissed Jeans, and Yelawolf have in common?

That's right, they're all playing in town this weekend!

Thursday 6
Casbah puts on Pissed Jeans, a noisecore quartet from Allentown in Pennsylvania. The Jeans re-released early work Shallow this summer for you completists. The collection contains mix-tape favorite “Boring Girls,” which you can hear at the top of this week’s podcast if you prefer to take this thing aurally. The Jeans are crit hits for “falling somewhere between the Birthday Party’s puked-up blues and the Jesus Lizard’s punch-drunk nut-thrusting” (Pitchfork). Super-cool poles to fall between. Two of our favorites here at the Monk House, anyway. If you’re a fan of the brand and looking for an inroad to Pissed Jeans, allow us to recommend last year’s Honeys. Even the doucheoise at Spin gave that one an 8 out of 10 for making noise-rock that’s “not just cathartic but no-kidding thoughtful.” It’s true, and with Stickers, Teenage Burritos, and Keepers opening the show, this’d be your Thursday night must-see TV.... Utter mentionable: SoCal stalwarts Swingin’ Utters, Lagwagon, and This Legend fill a pop-punk bill at House of Blues. Lagwagon last week dropped Hang, their first disc in nine years, and it’s getting props from all the right corners, with Sputnik, PunkNews, and Hit the Floor all calling the collection “most excellent”.... Else: Up for some Italian? From Pesaro, Italy, post-punk quartet Be Forest join L.A. punkgaze trio Tennis System at the Hideout for a night of chillwave muzak shot through with shards of electronic dissonance...L.A. alt-rockers the Janks (“a fore-piece band making Janky love and hate songs”) are at the Loft at UCSD...whilst up in Solana Beach, folk-pop singer/songsmith Mason Jennings takes the stage at Belly Up behind his latest (released on 11-12-13, eyeroll), Always Been. 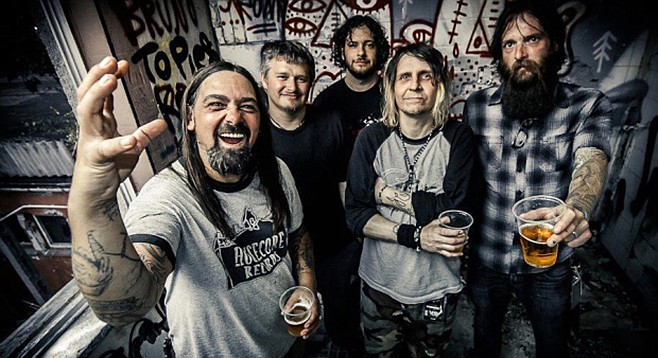 Friday 7
“Slumerican” hip-hop hit Yelawolf has the mic at Porter’s Pub at UCSD. With an easy Southern cadence (he’s Alabaman) and songs about being strangled in the bible-belt, Yelawolf’s a different kind of rap animal, not afraid to go acoustic and soulful on his modern-Southern-gothic latest (and Eminem-assisted) Love Story, which is s’pposed to be released in its entirety “pretty soon.” It’s been coming out in dribs and drabs, with another single, “Til It’s Gone,” recently closing out the popular biker-crime show Sons of Anarchy. We've got "Til It's Gone" rolling on the podcast this week.... Upthataway, there’s “an evening with” moe. at Belly Up. The Buffalo-based psych-n-prog jam band is touring in support of this years No Guts, No Glory! record. “Customers who bought this, also bought String Cheese Incident, Phish, Chris Robinson Brotherhood,” just so you know.... Around town Friday night: New Orleans sludge-metal band Eyehategod brings the heaviosity of this year’s self-titled CD to Soda Bar after Nashville noisecore trio Today Is the Day and our own Loud Family, Archons...Tower Bar stages psychedelic-soul throwbacks Amerikan Bear, after Jesus Sons, Moonshine, and Dark Seas...while Widows, thee Fink Bombs, Tiki Bandits (from Voodoo Glow Skulls), and Penetrators (curiously, also from Voodoo Glow Skulls) fill a garage-punk bill at Til-Two. 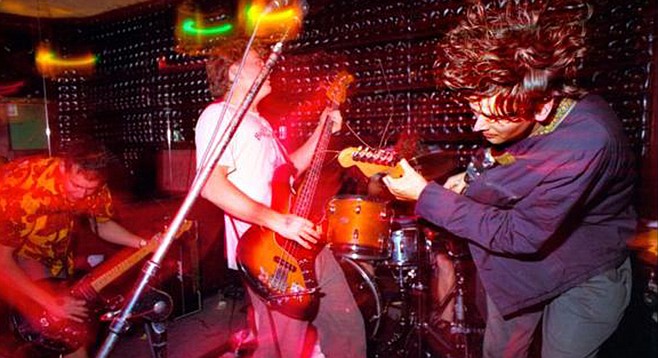 Saturday 8
“The spirit of the thing is what we want to capture...mess things up, like totally skewing everything, destroying everything and still making it totally listenable.” That is San Diegan-cum-Parisian Kevin Branstetter of experimental indie-rock band (from back when that meant something else) Trumans Water. We’re coming up on 25 years of the Bransteter brothers’ brand of rock deconstruction and improvisation, searching, always searching — on a worldwide scale ever since the BBC’s John Peel got into them — for those “skewed” but “listenable” musical moments. I never missed them back in the day, and I don’t intend to miss them this weekend when they headline sets at Casbah after Trumans singer Glen Galloway’s Octagrape and St. Pete (FL) post-punk trio Permanent Makeup.... For the rest of you: Scottish indie-rock band (the current meaning) We Were Promised Jetpacks plays the all-ages Irenic behind this year’s well-received Unravelling CD. Twilight Sad goes first...Brooklyn’s psychedelic rap factions Flatbush Zombies and the Underachievers share the all-ages mainstage at Soma behind this year’s collaboration The Butterfly Effect...San Diego’s up-and-coming indie-punk duo Crooked Rulers reign at the Tin Can...Bay Area rapper Andre Nickatina (née Dre Dog) has the mic at Porter’s Pub behind his new EP, Cupid Got Bullets 4 Me...while adult-contempo pop group Toad the Wet Sprocket (“Walk on the Ocean,” “All I Want”) bumps its ass on the Belly Up stage.