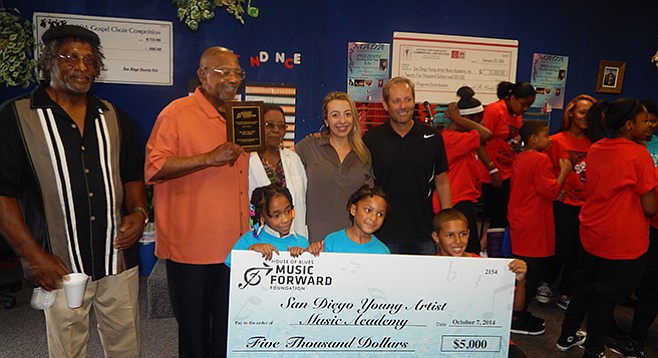 Something for the kids

“I like Christian rap. I love hip-hop,” says Quincy Brown, 14. “Tupac is my idol. I love Tupac. The way he sings about the women in his songs? Like, he’s not a gangbanger, he’s a thug.” Brown grins. “But, he’s a respectful thug.” A visitor reminds him that Tupac is also a dead thug. “That’s what people say.” Until a few days ago, Brown and his 16-year-old sister Brianna lived in Chula Vista. Now they live in Menifee, California. Their father drives them all the way back (about 75 miles) so they can continue at the San Diego Young Artists Music Academy in Southeast San Diego.

Housed in a converted retail suite, Brown and his sister, along with about 80 other children, come to the after-school program twice a week. Brown says he has written a few hip-hop rhymes, but he is too shy to sing them. “The only person I perform with is Dre da Flame. He’s my favorite San Diego Christian rapper.” But Brown’s sister isn’t shy at all. She belts out a Dre lyric: “My church-boy swag is drippin’ like water.” She giggles. “Water, water, water.” Her hair is tinted the hue of a raspberry popsicle. “I wanna become a vocal coach,” she says, “and a choreographer.”

A few of those giant facsimile checks, the kind they give out at ceremonies, are displayed on the wall behind a stage. The most recent, dated October 7, 2014, for $5000, was awarded by the House of Blues Music Forward Foundation. Founder George Hill explains that such gifts are what fuels his organization. “It runs about $150 per month, per child. Most parents, because of the area we’re in, can’t pay that. Some pay $10 a week. Some pay $20 a month.” He says the House of Blues money will help make up the difference.

Hill, an affable man in his 70s, offers a tour of his academy. “Me and my wife Robbie were driving down Logan Avenue one day and we saw kids doing graffiti. She said, we’ve got to do something for these kids.” Shortly after, the Navy veteran leased space in an as-yet unfinished strip mall on Alpha Street. “We’ve been here since 1996. We got our nonprofit status in 1998.”

Open Tuesday through Saturday, students work out dance routines to gospel hip-hop (“Themes are based on life and church,” says Brianna), and they study instruments like the piano. The academy also features a community choir. Kids here do not learn blues or jazz or other forms of Americana. That sort of music, says Quincy Brown, is reserved for the ride back to Menifee. “My father listens to blues all the time. What I’m getting out of this place? Respect. I have love for everybody. It’s like a whole ’nother family here. I wouldn’t like everybody as much if I didn’t come here.”