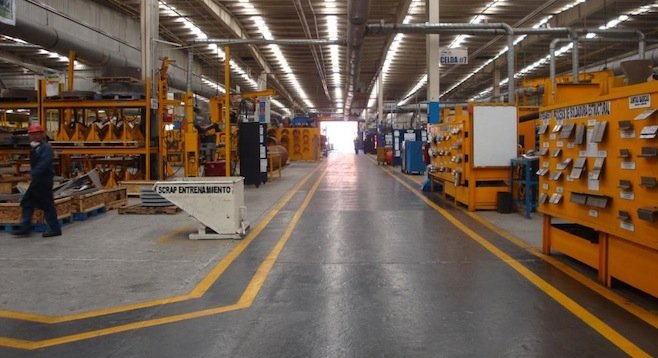 General Dynamics — the defense-contracting behemoth that owns National Steel and Shipbuilding and is footing much of the bill for the referendum campaign against the barrio plan on next Tuesday's ballot — is outsourcing a major part of its NASSCO shipyard work to Mexico.

Through its lobbying muscle in Congress and the Pentagon, the multi-national military-hardware giant has been given a series of special exemptions from federal laws forbidding such outsourcing, which critics say could open the door to foreign espionage and terrorist penetration of key Navy vessels, as well as drastically cut the number of jobs for shipyard workers in the United States.

A volley of anti-plan hit pieces paid for by General Dynamics and its contracting allies feature San Diego mayor Kevin Faulconer and ex-mayor Jerry Sanders warning of job losses, though the piece provides no numbers or other details to document its claims.

"It would eliminate industrial land the shipyards and their suppliers need to create new jobs," the mail piece quotes Sanders, who now runs the local chamber of commerce, as saying about the community plan.

In fact, sources knowledgeable about the company say General Dynamics needs no more industrial land in San Diego, and very few, if any, new jobs are likely to be created here by the firm regardless of the election's outcome.

Instead, a large and growing chunk of the shipyard's work is already being exported to a sprawling maquiladora complex in Mexicali run by a General Dynamics subsidiary known as Tecnologias Internacionales de Manufactura, S.A. de C.V., where wages and industrial health requirements are significantly lower than in the United States.

"TIMSA was established in 1991 as a wholly owned subsidiary of General Dynamics NASSCO," according to the maquiladora's website. "Today, our manufacturing operations are located in two prime industrial parks in Mexicali, Mexico, just two hours from the Port of San Diego, and less than four hours from Los Angeles and the Port of Long Beach."

Federal documents, disclosed in March 2009 as part of the federal exemption process, show the sizable degree of the economic hit of the operation to stateside employment and San Diego's economy, rising from $90 million in 2000 to $245.3 million at the time of 2009, the most recent data made public.

"General Dynamics proposes to increase the value of an existing agreement for the transfer of technical data, defense services, and hardware to Tecnologias Internacionales De Manufactura, S.A. De C.V., Mexico to support the design and construction of auxiliary ships on behalf of the United States Navy and the Military Sealift Command," according to a State Department "Certificate of Proposed Issuance of an Export License" under the Federal Arms Control Act.

"This Auxiliary Ship Building Program was initially approved in September 2000. It was originally notified under DTC 107-00 for $90,100,000. This proposal would increase the value of the ongoing program to $245,300,000, which requires Congressional Re-notification.

Faulconer, Sanders, and their chamber of commerce allies, usually vocal maquiladora boosters, have remained conspicuously silent about the Mexicali plant, claiming in their mail piece that "the shipyards are now expanding to service the U.S. Navy's Pacific Fleet," but not mentioning where much of the real expansion is taking place.

Could the work currently outsourced by General Dynamics to its Mexicali maquiladora ever return to the United States — and Barrio Logan in particular? That's unlikely, insiders with a knowledge of the lucrative maquiladora system say, noting that maquilas offer overwhelming financial and regulatory advantages for the defense contractor over any possible resumption of work in San Diego.

Because of its obvious need for a bayside location, the shipyard itself would be unlikely to move from San Diego, no matter what the barrio plan outcome is next week, for both political and obvious practical reasons. In addition, a shutdown of the yard would likely require General Dynamics to absorb potentially billions of dollars of environmental cleanup costs.

Calls placed to NASSCO's manager of public and governmental relations Sarah Strang and Len Hering, executive director of the California Center for Sustainable Energy, an ex-admiral spearheading the contractors' opposition to the barrio plan, have been unreturned.

Great reporting. Why are the opponents of the BL community plan doing what they are doing?

Yes, but at no point in the article does the writer detail exactly what work, or product, is made in Mexicali. Can this product be made in Barrio Logan? Or anywhere's else in the good ol' US of A? What are they manufacturing, EXACTLY? Or is that too technical for the author?

A maquiladora is an assembly plant. The work is done much cheaper in Mexico, than it would be here. Many U.S. companies use them, including Sony and Volkswagen. So it's easy to understand why NASSCO is doing this; it's all about increasing their profits.

They claimed this canard on materials hustled to ignorant shoppers at grocery store entrances -- and got enough signatures to qualify their citywide referendum for the June ballot.

They've continued to falsely claim it on expensive TV ads they've been running to get people to vote against Barrio Logan's own community plan -- Barrio Logan's business, Barrio Logan's right to secure the health and well-being of its own residents. They've been using ex-Mayor Jerry Sanders and a bunch of double-dipping retired Navy admirals to pitch lies to the people about losing jobs.

And now we find out they routinely outsource work to Mexico? Wow.

So defense contractors (and former Mayors) lie and engage in unethical behavior? What a shocker.

Best piece I've seen on this deceitful anti-community campaign by NASSCO et al. Explains well at least one (surprising!) part of the company's agenda. All the lies and misrepresentations must surely simply be depressing the turn-out. People are confused. No doubt the goal of the Proposition supporters. But this story brings one big secret into the light of day.