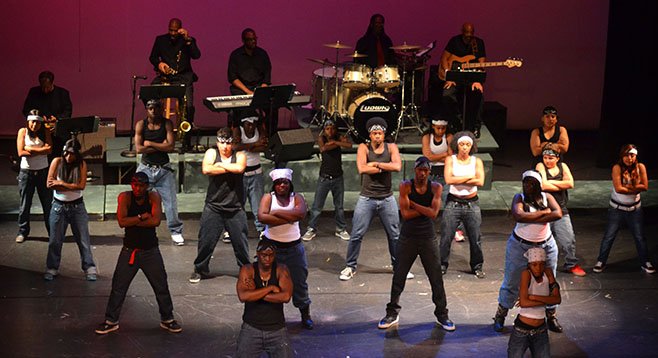 Two shows must close this weekend, and that’s a crying shame

The School for Lies

The North Coast Rep’s The School for Lies had that rare, mega-hit show feel from the start. David Ives set his take on Moliere’s The Misanthrope in 1666, and the dialogue’s rhymed couplets. So, like, yawn?

No. School’s the exact opposite of a musty, high-toned period piece, where monolithic costumes move about as fast as the pyramids, and everyone talks with snuff-stuffed noses.

Ives, author of Venus in Fur and The Liar (which opens at Scripps Ranch Theatre, March 29), injects low, contemporary bawdy into his up-scale verse. The combination’s a kick.

And a combination of factors make this show stand out. The design work, from Alina Bokovikova’s ornate costumes and Peter Herman’s curly, basketball-sized wigs, to Matt Novotny’s lighting and Marty Burnett’s first-rate set, all blends together. As does the acting. The cast must speak Ives’ poetic flurries as if David Mamet wrote them — and they do, beautifully.

I understand the need to close a show at a specific time. Promise a season to subscribers and you must deliver one. Ergo the conveyor belt approach. But every now and then one comes along that, if allowed to continue, would not only raise revenue but also showcase the theater. It may even attract audiences who have never been there before.

North Coast Rep was lucky to have an extra week to extend this one. It ends Sunday night.

Dancin' in the Street

There’ll be Dancin’ in the Street at the Educational Cultural Complex through this Sunday.

Calvin Manson, artistic director of the Ira Aldridge Repertory Players, and Eric Overstreet conceived this “Tribute to Soul” music. What begins as a talent contest to find the “best of the best,” among seven contestants, turns into a greatest hits celebration sung with feeling and force and backed by a tight, five-piece band. Highlights are many: Janice Edwards’ ”Mustang Sally,” MC Galaxy Glen Reynolds’ funny (and accurate) version of Stevie Wonder’s “Superstition,” and Carl Overstreet’s ocean-deep “A Change is Gonna Come.”

The tribute also honors its title with various forms of dancing. And the electrifying “Dundunba,” the “dance of the strong man,” by the West African troupe Teye Sa Thiosanne, alone is worth the price of admission.