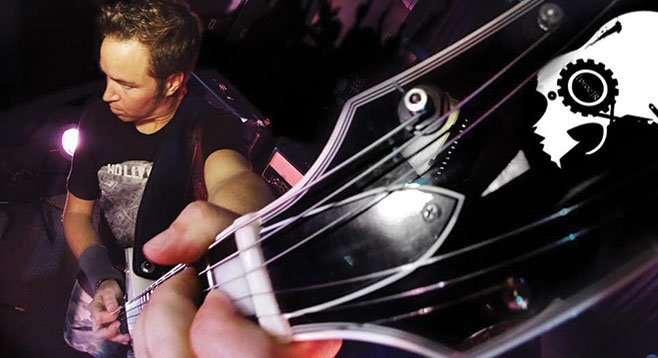 “The shot of me that’s on the front of the new GoPro box?” says Tyler Jordan. “It’s on all their billboards, too.” That’s him, for example, on the side of the Pantages Theatre in Hollywood. “That big, giant wall.”

GoPro is a high-definition camera designed to withstand abuse and is favored by skydivers, skaters, surfers, snowboarders, motocross and BMX riders, and now, rock-and-rollers. How the 40-year-old Mission Hills musician managed to weasel himself into the GoPro limelight is a story of skill, luck, and timing.

He says the company recently introduced a music mount into the market.

“It’s aimed at musicians of all types. They have, like, a jaw clamp and an extension thing and you can put it on keyboards, mic stands, whatever.... You have a new angle of view that nobody’s ever seen before.”

The company sent him a box of test gear. “After they came out with the music mount, they started looking for bands to use it to shoot pictures of themselves that GoPro could use for their social media and their packaging.” Jordan clamped a GoPro to the tuning stock at the end of his guitar neck, among other places. “It’s really small, the camera. It doesn’t ruin the experience for either the crowd or the band.”

He also clamped GoPros all around his band Processor, and he filmed them at venues like Brick by Brick and El Camino in Little Italy.

Although GoPros are known for filming motion, Jordan captured thousands of still images.

“Several bands were doing this. After we submitted, I got a call from my contact at GoPro.”

They’d selected one of his Processor band shots for the front and side of the GoPro box as well as the company’s catalog.

Meanwhile, Processor is on the verge of releasing their debut CD. “I think we’ll be done recording our first full-length album in a few days.” What kind of music? “Unpredictable hard rock.”

Jordan says he got paid for the photos and a GoPro day job, too.

“What’s cool is they said that due to the frequency of successful shots out of the photos I submitted that they wanted to hire me to do more photography for them. They sent me more cameras and more mounts.” He’s shooting other bands now as well. “Their website has three shots I’ve taken.”