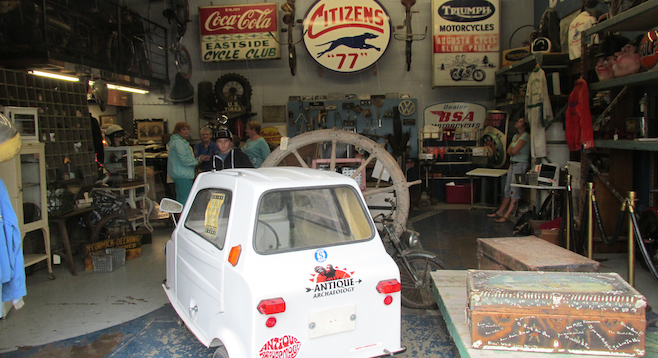 Antiques shop made famous by the History Channel.

Driving from the upper Midwest through Illinois, immediately across the state line is the historic town of LeClaire, IA. We quickly pulled off the I-80 exit, but not to visit the quaint old buildings in this Mississippi River town of 3,800, nor the birthplace of Buffalo Bill.

We planned out return trip to San Diego via I-80 for one reason only – to visit Antique Archeology – the shop known to all lovers of the History Channel’s hit TV show American Pickers. 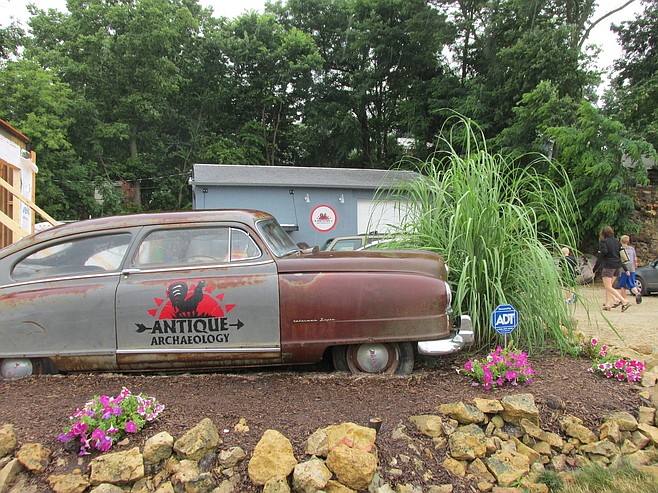 Run by picker Mike Wolfe since 2000, the shop attracts around 1,000 people per day. When we arrived, a constant rain didn’t keep cars from parking bumper-to-bumper in the alley in front of the store that appears in each episode.

Looking at many of the large items displayed for sale, fans of the show can remember watching the episode in which Mike rummaged through piles of junk to find a unique pick.

Mike Wolfe, along with his lifelong friend and traveling picker partner Frank Fritz, are usually not in the store. While Mike shows up once or twice a month for filming, Frank’s shop – Frank Fritz Finds - is in nearby Savannah, IL. The charmingly tattooed Danielle, who manages to track down places around the country for the guys to visit, now works out of an office in Chicago. Due to the show's popularity and privacy issues (i.e., stalkers), she had to relocate from the LeClaire store.

Mike’s brother (sometimes seen on the show) is constructing an additional building off the store’s parking lot, which Mike has designed to be in the style of a 1940s mechanic’s garage. In addition to extra floor space for more stuff, he will house his incredible collection of old motorcycles. Mike recently opened a much larger shop in Nashville, where he now resides with his new wife and child.

Debuting on the History Channel in January 2010, Mike spent four years pitching the idea to every TV network. He shot and re-shot his own demo tapes. He even did his own camera work. But nobody wanted the show.

A change of upper management at the History Channel opened it up to new programing. Once known as the network of old war movies and historical documentaries, the network took a sharp turn with Pawn Stars – at one time the highest-rated non-news cable TV show.

The success of Pawn Stars opened the door to American Pickers, as well as other pop-culture historical shows such as Kounting Cars, Rick’s Restorations and Storage Wars (A&E). American Pickers now rates third to Pawn Stars’ second, with A&E’s Duck Dynasty in a strong first place in viewer ratings.

Just as they're portrayed in the show, Mike and Frank are mostly on the road. They really do travel the back roads of the U.S., two or three weeks a month, digging through old barns and out-of-the way storage buildings.

In season two, the guys traveled to Southern California, discovering Bird’s Surf Shack and one of the largest collections of surfboards in the world, located in an old Quonset hut in the Morena district of San Diego. The duo also visited Oceanside’s California Surf Museum, donating a rare Plastic Fantastic board purchased in Bird’s shop for $2,500. In return, they were treated to a surf lesson off the Oceanside Pier.

As Mike and Frank say on the show, “Not too bad for two guys from Iowa.”

Cool story, Mr. Harrison, not to mention the nice side trip. There is a lot of discussion on the web and elsewhere, including my own home, as to whether or not the show is staged (fake), but I come down on the side of it being believable. Sure, because it's a TV show, there have to be some contrived moments, such as their initial meetings with property owners, but one need look no further than Mike's finding the long lost Von Dutch VW motorcycle for proof that this show is the real deal. Thanks for sharing. 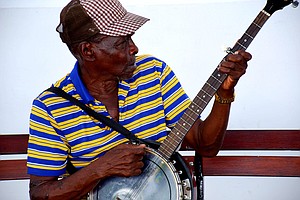