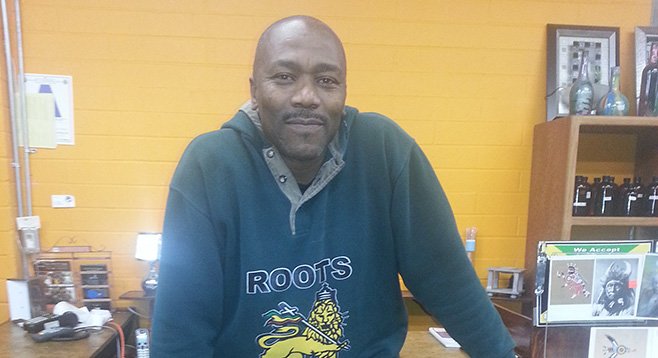 “94/9 has a long history of airplay and shows featuring Bob Marley, and always — I mean always — the response has been overwhelming.” That was a comment from FM 94/9 general manager Rick Jackson singing the praises of reggae music on commercial airwaves. Yet he canceled the Sunday-morning Brunch with Bob and Friends in 2012 after eight years of solid ratings.

After 25 years, 91X canceled the Sunday-night Reggae Makossa show in 2008, even though the show was doing much better ratings-wise in its time slot than the station was doing as a whole.

Now the plug has been pulled on another longtime weekly reggae show. Yard Sound, hosted by Ras Charles, has been yanked by Palomar College station KKSM (1320 AM). Jamaican-born Charles has been hosting and producing Yard Sound for 12 years. It’s final airing was to be January 8.

A former Camp Pendleton Marine, Charles has operated a reggae-inspired clothing and gift store on Coast Highway in Oceanside since 1990.

Each Yard Sound show would feature a specific reggae artist as well as music by local bands. “Then I would explain what each song means, what it was all about. People can learn about each artist.” Between songs, in his thick Jamaican patois, Charles spoke about family, environment, politics, and the importance of arts in culture.

Charles says he found out about the Yard Sound cancellation in a letter from KKSM. “They said that in order to continue the show I would have to become a student of Palomar.”

Palomar telecom professor Pat Hahn says that while Palomar has long allowed nonstudents to be student DJs on KKSM, that the state is now enforcing student-only edicts at community colleges like Palomar. Hahn says he assumes that this will also mean the end of Doug Best Swings, a Saturday morning show hosted by the 88-year-old Best, which features big-band era music and has been on the airwaves for more than 30 years.

Charles tells the Reader that despite KKSM’s weak AM signal, Yard Sound had regular listeners “in China, Sri Lanka, Brazil, and Europe,” who listened via the internet. He says locals could also get KKSM by simulcast on Cox cable. Charles says he could continue to send out Yard Sound via the web, but without a studio, he won’t be able to produce the show.

“If I don’t find a studio, It will be missed by many people. Still, I respect the station and the college for giving me this opportunity for so long.”

Archived Yard Sound shows can be heard at yardsound.com.

This was not cut from original article, but it may be interesting to some.

Brunch with Bob and Friends hosted by Tommy Hough is now aired Sunday mornings on low-powered Rez Radio, KOPA 91.3 FM. KOPA is hard to receive outside the Pala Indian Reservation. Reggae Makossa now airs Tuesday nights at 7 pm on a Tijuana-based station at 102.5 FM. And anyone with a high definition radio receiver can listen to 94/9's “San Diego Bob Radio,” an all reggae/all the time format launched two months ago. But so-called HD radio signals have yet to make an impression among radio listeners.