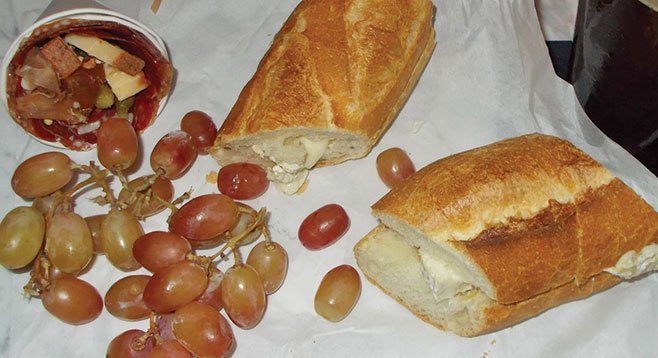 First thought when I come in under the arches: This is our Alcatraz. Just think of all the poor schmucks who shuffled through here in cuffs when it was the old police HQ.

Second thought: Wow! Look what they’ve done to it.

This Spanish courtyard is totally beautiful. The renovation opened a couple of months ago. It looks like the plaza of a wealthy little Mexican pueblo.

And, oh, yes. I remember: this incredible lady, Vonn Marie May. She stood in front of bulldozers when developers wanted to vaporize the place. Wouldn’t budge. Without her, we’d have yet another UTC mall here.

Problem: most of the eateries scattered around the square ain’t that cheap.

Until I come to this cheese place! Venissimo, place I really liked up on Washington Street. Cheeses from everywhere.

And the good news was you could order a chunk of any cheese in the shop and they’d slap it in a baguette and sell it to you for five bucks, including an apple or some grapes.

So, I head in to this bright, woody place with yellow-and-white walls and timber end-wall with cut-out black-and-white cows, goats, sheep scattered around, and bon mots...

“He who does not eat cheese will go mad” (Old French proverb). 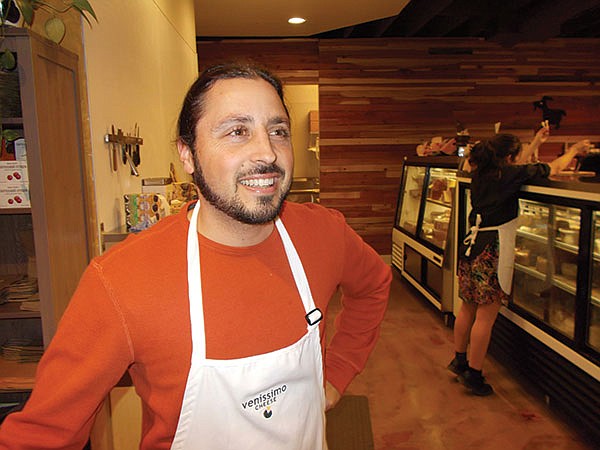 Behind a big display counter, a gal and a guy are cutting cheeses and giving out samples to customers. Guy has a neat beard, pony tail, shorts, flip-flops, and a white apron. Comes up. Rob.

“Do you still have those $5 baguette sandwiches here?” I ask.

He points into the display case. First thing I see is a bunch of, like, water-cooler cones, each filled with sticks of cheese and slices of different kinds of salami. “Meat-and-cheese cone, $3.50,” the card reads. “The perfect snack.”

Next door, they have another little menu. With sandwich-filling suggestions.

Or, for 50 cents more, you can get panini (They call it a “Venini”) like the fresh chèvre (goat cheese) and bacon jam or the “meaty pretzel,” whatever that is, with “red dragon mustard cheddar and salumi.”

For ten bucks, they even have a “fresh and fluffy burrata bowl, with your choice of topping.” Burrata is a fresh cheese with a skin of mozzarella and an inside of cream. You cut it and the cream oozes out from inside. Plus fruit, natch.

Too much. I’m looking at bries, gruyères, cheddars, camemberts, chèvres, bûcherondins... What can an average Ed know about all this stuff? For a food that started off back in the day as just a way of preserving milk, this is getting out of hand.

Decision time. Rob should steer me straight: he manages their Academy of Cheese, where they have classes in cheesemanship.

“Can you handle goat?”

“Then how about this bûcherondin? It’s old enough to have developed flavor.”

He’s pointing to a log of cheese sitting on top of the display cabinet. Nubbly skin with little brown rinds running around the log’s surface, fading to a light cream inside. I nod.

He takes it over to the work bench against the wall, splits a baguette (from Bread & Cie, glad to see).

“Sure,” I say. But can’t resist grabbing one of the meat-and-cheese cones ($3.50) to have something totally savory. So, that’s ten bucks out. But still something missing.

They do have plain and flavored San Pellegrino for $1.75, but I look outside, see all those café patios...gotta be a way. “Good luck,” says Rob. 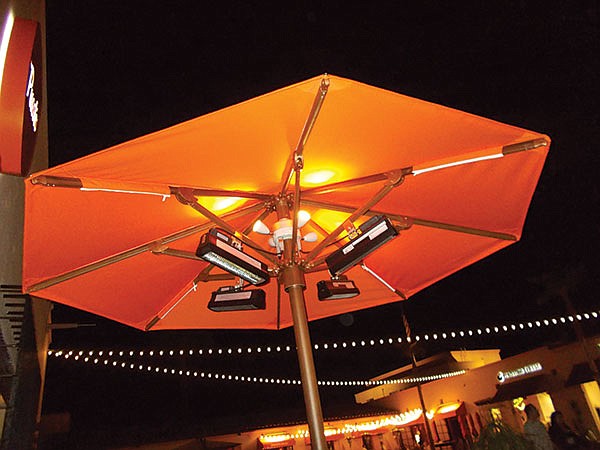 As I start out, have to ask myself why Venissimo doesn’t have its own patio with tables. But then I have an idea. I cross the plaza and head toward Puesto.

Cheery gal at the entrance starts to hand me menus. At the same time — be still, my heart — I see they have Arrogant Bastard on tap here.

“Uh, any chance I could buy an AB and drink it with this sandwich on your patio?”

Of course, the AB costs me $8.64, including tax. And when I think about it, a glass of white wine would probably have meshed better with my Bûcherondin and fig. But, turns out that AB’s malty taste (the one that floods your buds while you’re recovering from its initial bitter hop hit) mixes in nicely with the salty, tangy cheese and sweet fig flavors.

Then I hit the little cone. Oh, man. Talk about strong tastes? The wine-cured salumi and prosciutto slices, sticks of smoked cheddar, and cornichons (uh, gherkins) are practically a meal in themselves. With them, you definitely need the beer, just to tame the sharp saltiness.

Next time, I’m going back and getting the cheese Rob said was the most expensive one in the shop. “It’s Hook’s cheddar. Costs $40 a pound. That would come to about $15 per sandwich.”

Wow. Is now a good time to be eating and drinking in San Diego County or what? I sit here slurping, chewing, and imagining the old days. What prisoner could have dreamed it would come to this?