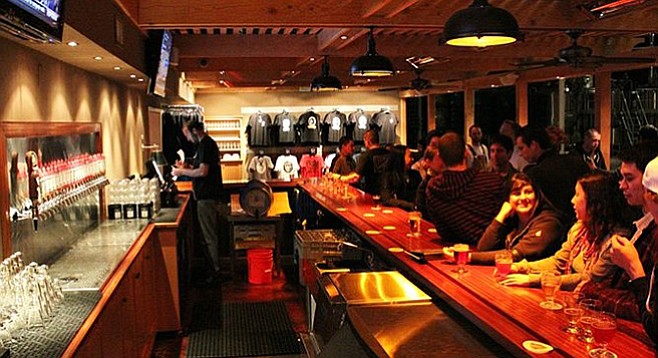 The local brewing companies that upped their game in 2014.

Last week, I shared an article about the improved beers at Acoustic Ales Brewing Experiment, and it got me to thinking of other breweries I’ve tasted progress from over the past 12 months. The following is a year-ending, retrospective examination of those that made the biggest stride over that span.

Coronado Brewing Company; Bay Park, Coronado & Imperial Beach: Let me be clear. This was already a superb member of the local suds scene, which makes it all the more impressive that they found a way to up their game. They did so with beers which have become extremely reliable in the quality department despite an unbelievable level of variety and constant rotation. Proof is provided in CBC being named Champion Medium-sized Brewery at the 2014 World Beer Cup.

Acoustic Ales Brewing Experiment, Mission Hills: They’re the brewery that kicked off this column's focus on enhancement. Hoppy beers that were formerly a bit confused and all over the map now exhibit finesse and poignant flavors that will keep lupulin addicts coming back for more. Meanwhile, their Belgian-style ales remain solid as ever.

Aztec Brewing Company, Vista: I’ve always loved the team behind this operation, even when I didn’t love their beers. A head brewer shift has translated to much-improved beers, especially the hoppy stock. Double and triple IPAs offer massive hits of tropical fruit and resin that make keeping a finger on Aztec’s pulse a pleasure.

Mission Brewery, East Village: The majority of this company’s beers are meant to be pleasing to the masses. Doing that means sacrificing boldness of flavor, but the brewing team has explored more tasting room-only and seasonal releases, and that helps to not only round out their portfolio, but significantly enhance it as well.

ChuckAlek Independent Brewers, Ramona: This husband-and-wife interest had oodles of heart, but lacked experience early on. Nearly two years later, they’ve made a good name for themselves by reviving old, forgotten beer styles, to the point where they recently garnered the backing and support of Boston Beer Co. via its Brewing the American Dream competition.

Twisted Manzanita Ales, Santee & Pacific Beach: This company’s fast growth was a bit confounding in the early days, as the quality of the beer didn’t match the sales numbers to most, but each year they’ve dialed in the system a little more, to the point where there’s lots more to love at either of the company’s tasting rooms. *

Barrel Harbor Brewing Company, Vista: They started off under the radar in the thick of brewery-dense Vista with brews that were timid, murky, and not all that desirable, but in one brief year, they made nice strides to rise to produce beers that helped them to rise to a respectable level among neighbors. *

Indian Joe Brewing, Vista: A member of the review panel for my guide to local breweries put it best when speaking of the owners of this nano: “The duo is an example of how to recover from a near-failed brewery start-up during which early beers were inconsistent and flawed.” Nowadays many are not only good, but quite interesting as well.