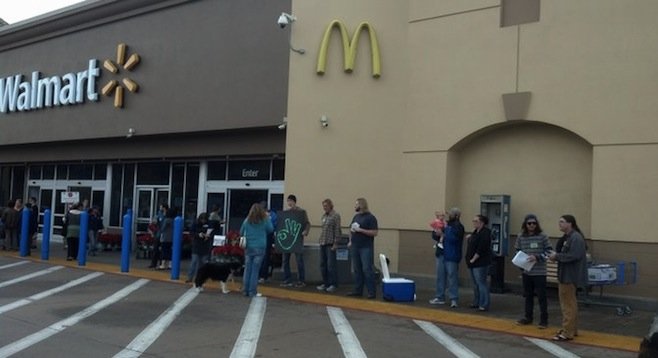 Gray skies and scattered rain failed to deter hordes of shoppers from descending on area retailers on Black Friday (or, in a phenomenon the media has dubbed "Gray Thursday," from shopping on Thanksgiving night as soon as the dinner dishes were cleared).

The crowd still trickling into the Serra Mesa Walmart on Murphy Canyon Road on Friday morning was greeted by about two dozen protesters representing a handful of viewpoints but united in their condemnation of the big-box retailer.

A handful of people associated with 2011's Occupy movement passed out postcards deploring Walmart's alleged $8.82 average wage and stating that the average Walmart store costs taxpayers $420,000 per year in welfare benefits provided to its low-wage workforce. Some individuals, such as Gabe, who declined to be formally interviewed, said they were just members of the community using the protest as a forum to express support for a change in the company's business practices.

The largest contingent, however, appeared to have been organized by Our Walmart, a group backed by the United Food and Commercial Workers grocery union that has been assisting employees who have sought to unionize certain Walmart stores. The group is also asking the company to commit to a wage floor of $25,000 for full-time workers across the organization.

"The associates aren't paid a living wage, and so they're required to go on public assistance," says Martha Sullivan, an event organizer and Occupy activist who also expressed opposition to the idea of opening the store on Thanksgiving and pulling workers in to prepare for the earlier-than-ever massive sale, which started at 6 p.m. Thursday this year. Sullivan and a few others also sought signatures on a declaration being circulated by Our Walmart that outlines workers' demands.

While the pro-union group had called for another in a series of one-day strikes by Walmart workers, none of the several individuals who spoke with the Reader identified themselves as current or former employees of the company, though several other pickets around the county were scheduled. At least one, advertised with a 10 a.m. start date in Chula Vista, failed to materialize at all.

Is it only Wal-Mart that should pay more? Or fast food places? Or should the minimum wage be raised to $15? If doubling the minimum wage would be good, wouldn't tripling it be better? Or just make it $50 an hour. That sounds like a "living wage" for San Diego.

Don't worry, there's no chance that businesses will lay people off, cut hours, stop hiring, raise prices, or go out of business. No chance at all.

If $8.82 isn't enough, quit. You didn't have to take the job in the first place. What's that, you can't earn any more anywhere else? Maybe it's YOU that's the problem then. Try getting an education or useful skills. Unskilled labor simply is not worth much, I'm sorry to say. No government edict can change that.