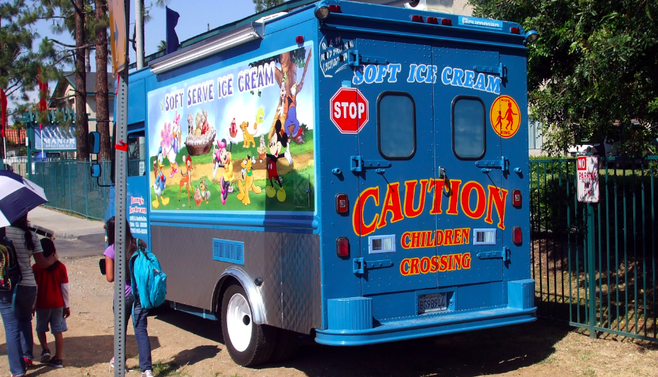 Food trucks have reportedly been causing unsafe traffic conditions while they sell snacks to children as they leave Joli Ann Leichtag Elementary School in the afternoon.

According to Hector Romans, the father of two daughters, the trucks park around the corner from the school between the intersections of Smilax Road and Mimosa Avenue, which are both busy, narrow streets. He said some of the truck drivers don’t park completely off the road or station themselves in posted “No parking” areas, causing traffic congestion and danger for children crossing the streets.

He mentioned that when school buses stop with flashing lights to unload students, some drivers don’t stop or go around the buses because the catering trucks the obstruct visibility of drivers of oncoming vehicles. Romans also said he and other parents have complained to authorities at the school about the problem but have had no resolution.

Has anyone thought of calling the sheriff? The city of SM contracts with the sheriff for law enforcement. If the area is in an unincorporated area, again the law enforcement is the responsibility of the sheriff. If those trucks are parked illegally or are blocking the traffic lanes, they can be cited, and/or towed. It also suggests that if there are violations of school bus laws, the sheriff should be out there. Now the "office clerk of the school [is] aware of the problem the trucks were causing." We now have the office clerk handling matters of this sort? How about that world-class school district that operates the school? This should get the attention of at least an associate deputy assistant superintendent, who could call the sheriff.

So, John T. Griffith, how about a report of some real action, not mere hand-wringing, being taken? If I were a part of that school district, I'd be very embarrassed about this, and would be looking for someone to blame, like that "office clerk" who knows all about it, yet does nothing to correct it.