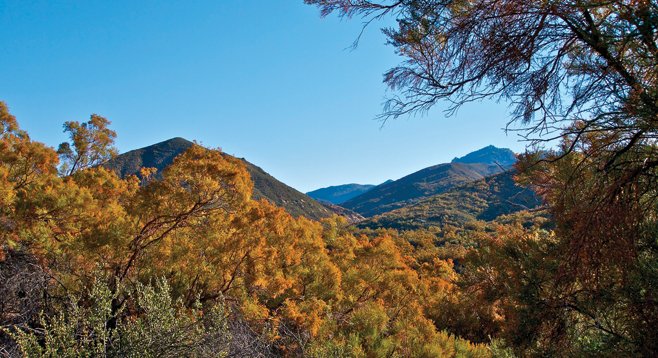 This section of the Pacific Crest Trail is a welcome sight for through-hikers on their way to Canada after spending many days in waterless stretches of the desert. Day-hikers will likewise enjoy the oaks and sycamores alongside a stream as well as some great chaparral and wildflower habitat. In most years, water flows beside several miles of the trail as Agua Caliente Creek descends from the San Ysidro Mountains. However, it is best not to count on water being present since in some years the creek goes dry by late summer. 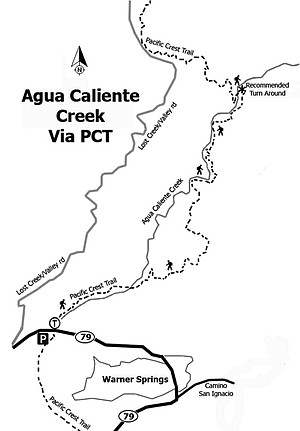 Initially the trail is just above or on a broad sandy wash studded with towering coast and Engelmann live oaks, interspersed with sagebrush and non-native grasses. The trail here is on Warner Ranch property that the PCT legally crosses as a result of an easement. Numerous horse tracks and a dirt road intertwine, but the PCT is well marked and easily followed. After trudging through the sand for about a mile, the trail crosses the stream and begins a gradual climb up a chaparral-covered hillside, leaving Warner Ranch property and entering the Cleveland National Forest.

After hiking about 3 miles, listen for the sound of water flowing over rocks as you descend toward the stream. The trail then follows the stream for almost a mile, crossing it several times. While hiking along the stream, note passing through a riparian forest dominated by coast live oaks, sycamores, arroyo willow, cottonwoods, and Coulter pines. The trees here aren’t as large as those encountered in the first part of the hike, but they are much more numerous and provide almost constant shade.

After nearly 4 miles, the trail leaves the stream and begins to switchback up the hillside. This may be a good point to turn around and retrace your steps. If you were focused on the trail ahead on the way to this point, the journey back is an opportunity to enjoy the views to the west toward Lake Henshaw and Palomar Mountain.

Distance from downtown San Diego: Approximately 68 miles. Allow 1.5 hours driving time. From I-8, exit onto SR-67 north, continuing onto Main St./SR-78 east/Julian Road to Santa Ysabel. Turn left onto SR-79 north and drive about 14 miles. Park in the turnout just beyond a bridge 2.5 miles north of the Warner Springs CALfire station and walk back to the bridge. The PCT goes under the bridge. To reach the trail, start walking east from the northern end of the bridge and soon a small sign “to the PCT” will be visible. No facilities or water.

Hiking length: A little less than 8 miles, out and back.

Difficulty: Intermediate with elevation gain/loss of about 1000 feet. Stream water must be treated before drinking.