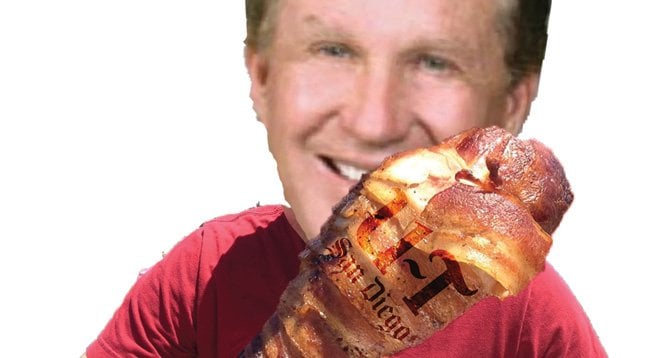 Grand del Mar resort owner and GOP publisher Douglas Manchester’s U-T San Diego appears to have gotten itself a pretty good deal from the board of the fair district. According to a board report on arrangements for this year’s big event, “U-T San Diego continues their long association with the Fair. They will be the sponsor of the Wine Festival, Dias de la Familia, and the Information booths.” The paper is putting up $13,000 in cash and providing $150,000 worth of so-called in-kind services. In addition, the U-T is printing the fair’s program, for which it is charging the district $70,000, according to the document, posted online last month. As part of the deal, the U-T “will sell ads in the program [from] which the revenue will be shared.”

All-cash sponsors of the fair included Wyndham Vacation Resorts, Inc., which kicked in $75,000. “Wyndham Resorts will be a sponsor of both the Fair and Race Meet. This is the 3rd year of their participation here. They will be offering fractional ownership within their vacation properties.” Cryptically identified OMG, Inc. is putting up $60,500 in cash. “OMG is a company that is primarily a wholesale company,” says the report. “They have a number of booths and use them to test market new products. Those that are successful here are wholesaled around the country and on TV. OMG has been a longtime sponsor of the Fair.” And beer maker MillerCoors, LLC is coming up with in-kind services in exchange for an official marketing tie-in with the fair. “MillerCoors will execute a retail promotion around the Fair in each year of the agreement. This promotion will be supported by a local media buy. The value of this promotion will be a minimum of $30,000 each year of this agreement.”

On the expense side of the ledger are the costs of such items as making sure the fair’s rag-tag army of carnies stay clean. A five-year contract with Comprehensive Drug Testing for “On-Site Drug & Alcohol Testing of Midway Personnel & Background Screening of New District Employees” runs an anticipated $248,139. The Monster Truck Show by WGAS Entertainment will cost $101,750 through the Fourth of July, according to the documents. And five years’ worth of temps from Labor Ready, Inc. are $5,466,625.

The fair’s out-of-town livestock judges probably won’t be able to check in to the Manchester Grand del Mar on the wages they make here. According to fair board minutes, the highest paid was Howard Wilson of San Jacinto, who gets $500 for working the “Chicken and Turkey Meat Pens.” Randy Shumaker of Tollhouse, California, was paid $350 in the “Rabbit Meat Pens.” Total livestock judging compensation was listed at $1450.

$1.9 mil a year for temps? Since everyone I see working at the fair is employed by someone else, I'd love to know what the million dollar temps were doing.