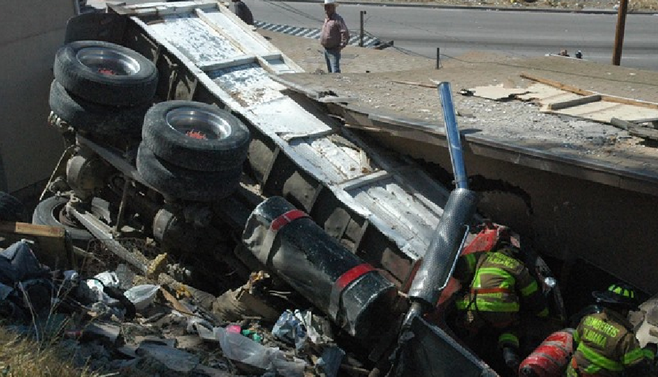 Land and sand co-opted out of necessity

Residents of a modest Tijuana neighborhood are as much to blame as the out-of-control tractor-trailer trucks that have repeatedly damaged or destroyed homes, wrecked cars, and claimed at least one life during the past two years, according to the city's director of urban development.

Because of the steep hill as Boulevard Salvador Rosas Magallón approaches 5 y 10, authorities long ago installed a series of sand-filled de-acceleration ramps meant to safely stop trucks when their brakes fail.

But, in an interview with El Sol de Tijuana, Esteban Yee Barba, Tijuana's secretary of urban development, said that residents of Camino Verde have been stealing sand from the ramp in their neighborhood for years, leaving little left to stop trucks.

In addition, he said residents have built structures on land originally meant for the truck-stopping ramp. "They have removed almost a third of the distance needed for the ramp to function," Yee told El Sol.

The result has been a series of disasters, most recently on April 26, when a family enjoying the afternoon sun on the patio of their Camino Verde home was struck by a tractor-trailer whose brakes had failed and was unable to stop in time because the de-acceleration ramp did not function properly.

The crash claimed the life of a father, seriously injured his wife, and left their one-year-old daughter less seriously hurt. Their home was declared a total loss, and two other houses nearby suffered substantial damage.

Almost two years ago, at the same ramp, another truck's brakes failed and it rammed into and destroyed another Camino Verde home, as well as crunching ten cars parked along the street.

Yee said city officials were taking steps to try to resolve the problem, but that it will take time. They plan to go to court to get orders to reclaim land originally meant for the ramps that has been taken illegally by residents.

In the meantime, he said, the city plans to erect concrete barriers, install speed bumps on the highway, place more signs warning of the danger, and to look for a less-attractive filler than sand for the ramps to discourage theft.

"The area adjacent to the ramp was once uninhabited land, and I remember that it functioned effectively on more than ten occasions to stop the trucks," Yee told El Sol.

If that crap happened here, heads would roll. So typical of Tijuana government to pass the buck when Tijuana government should've done something about the stolen sand and more importantly, not allowed a structure to be built. Here, if you even dream of constructing something, city inspectors show up almost magically. Within minutes, sometime. People died, who's gonna be held accountable? Wouldn't suprise me if the truck driver is in jail a la scapegoat. Andenle muchachos, ya basta con estupideses!

Put your seatbelt on. Not only is the government it's own worst enemy but, the PRI is back in power and it is back to business as usual! Case in point, the new rules Pena-Nieto recently released in regards to the drug war. One liason for all of our assets to contact. Thats not only stupid, its counter productive and the chances that this person won't be corrupt are nil! Time to go north amigos, there is no intelligent life here, only greed and corruption.