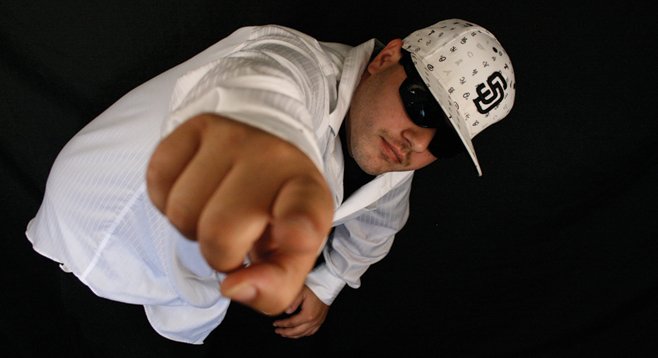 The Clinic's got positive swag

Born and based in Clairemont, 31-year-old songwriter/producer Joseph Sardina, aka Lil’ Joe, founded Non-Stop Records in 2005. “Before having any thoughts of being an artist, and being the youngest brother of four, I was given the name Lil’ Joe by the older crowds,” says the former James Madison High student.

He released his debut album, Starvin’, in 2005, followed by Playin’ My Cardz Without a Queen in 2010, both under his Lil’ Joe name. “I’d describe my music as commercial or mainstream, with an underground twist. It’s 1990s-style hip-hop, positive swag with a West Coast feel, no racial slurs, not trendy, and done from a playa’s P.O.V.”

Sardina now calls himself the Clinic. “After years of producing albums for myself and others, and doctoring music for people, I was building a reputation for ‘puttin’ on a clinic,’ in the streets and in the studio, with the sound I deliver.” His full-length debut under a new title, Playareallagy, was released in spring 2012, while his follow-up, Big Slang Theory, came out on December 21.

BEST ADVICE YOU EVER GOT?

“A graduate of the Musicians Institute in Hollywood named Gary once told me, ‘You’re only as good as your last song.’”

“I check Facebook, ReverbNation, and Twitter for status updates, Yahoo for news, and ESPN for sports. I’m a huge NFL and MLB fan, of the Chargers and the Padres, of course.”

“Mac, for sure. I work my magic on there with ProTools recording software.”

TOPIC FORBIDDEN AT YOUR FUNERAL?

“My will and what I would leave behind.”

IF YOU COULD READ OUR MINDS?

“I’d immediately try to earn money with such a talent and become a magician, or maybe the world’s most famous mind-reader.”

“The Langoliers was the most annoying movie ever, as well as the most disappointing Stephen King film. And I like most of his movies.”

MOST YOU EVER SPENT ON A DATE?

“Probably about $250, which included dinner and drinks in Old Town and a hotel room at the Hilton Mission Bay.”

BIGGEST LIE YOU EVER TOLD?

LAW THAT SHOULD BE CHANGED?

“The alcohol ban on the beach should be lifted. It can be limited to cans or plastic only, since nobody wants to step on any glass with bare feet.”

WHAT WOULD YOU TELL THE YOUNGER YOU?

SOMETHING YOU NEVER RUN OUT OF?

“Bottled water. If I can help it, I’ll stay away from tap or nonfiltered water.”

“I want to tour the world, showcasing and vacationing, go to a Super Bowl, and visit NASA. I also really want to visit Italy and Amsterdam.”

WHO SHOULD PLAY YOU IN A MOVIE?

“Jason Statham — he’s always a badass in his films.”

“I love cooking, I work full-time in telecommunications, and I’m interested in astronomy.” ■