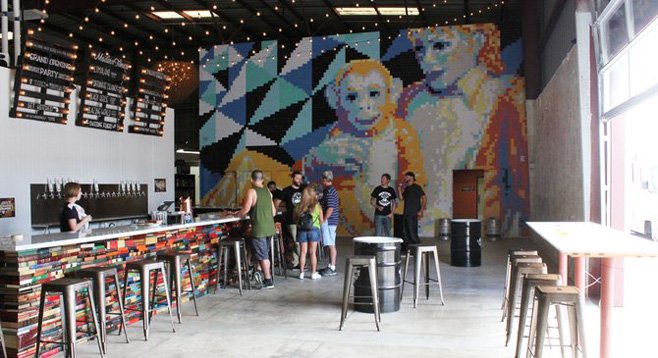 The finest of an unprecedentedly extensive rookie class

As I did last year, I’m calling out the best new brewing operations to debut in 2013 or so late last year that they didn’t qualify for the 2012 rookie of the year race. Last year, Societe Brewing Company, Monkey Paw Pub & Brewery, and Latitude 33 Brewing Company took top honors, with Amplified Ale Works, Belching Beaver Brewery, and Offbeat Brewing Company listed as my best bets to make the list in 2013. Let’s see how the newbie class — at 25, the largest of any year in San Diego suds history (and that doesn’t count the new spots opened by existing brewing companies) — shook out.

Rip Current Brewing Company: When opening their business, accomplished homebrewers Paul Sangster and Guy Shobe set out to keep the homebrew spirit alive by using their smaller pilot system to churn out an extremely varied and constantly rotating assortment of beers, and they’ve done just that while introducing phenomenal India pale ales highlighted by Caught In A Rip, a triple IPA; and exposing drinkers to rare beer styles like roggenbier, a nearly extinct rye-based German brew.

Benchmark Brewing Company: When determining who was deserving of best new brewery status, it came down to hundredths of a point, because this passion project of former AleSmith brewer Matt Akin is putting out such impressive beers. His brown ale and oatmeal stout were essentially perfect straight out of the gate, as were hoppier creations like his San Diego 71 double IPA. In the end, only a smaller number of offerings kept Benchmark out of the top spot. Think of them more as 1B than second place.

Amplified Ale Works: If anyone tells you they knew how great this nano operation sequestered in the back of a Pacific Beach kebab restaurant was going to be, it’s OK to call them a liar. Homebrewer and entrepreneur JC Hill came out of nowhere and, thanks in large part to head brewer Cy Henley (formerly of Alpine Beer Co.), immediately produced impressive beers like easy-drinking, uber-hoppy Electrocution IPA and Pig Nose Pale Ale. Easily one of ‘13’s best and biggest beer surprises.

Belching Beaver Brewery: Like many, once I got past the name, I was able to see the beers of this Vista-based brewery for what they are—tasty and well-crafted brews with SoCal appeal. They make several IPAs, all of which show well, but it’s their Beaver’s Milk Stout that has earned it the most raves in North County and at the company’s North Park tasting room.

Modern Times Beer: Crowdfunding and an experienced brewing trio are responsible for this emerging Point Loma brewery. The beers are early in their development and fluctuate a bit, but when they’re on, they’re quite desirable. An ever-growing series of Brettanomyces-spiked beers keep things interesting and an extremely attractive tasting room certainly doesn’t hurt.

Saint Archer Brewery: A mid-season brewmaster change and a late surge provided by a delicious double IPA and American-style stout are what jettisoned this company from the middle of the pack to the top third. New hop contracts should help Saint Archer continue to progress in its evolution come the New Year.

Offbeat Brewing Company: It may not have the fanfare of the aforementioned companies, but this little Escondidian outpost is making a number of appealing, low-alcohol, English-style beers, like Bear Arms Brown Ale and a refreshing pale ale called Girafficopter. Throw in cool rotating art and you’ve got something quaintly special.

Culture Brewing Company: Opening a brewery within walking distance of Pizza Port Solana Beach — one of San Diego’s most storied brewing spots — is a dicey undertaking, but a black IPA that ranks among the county’s best and a well-appointed, Belly Up-adjacent spot in the Cedros Design District have led to early success.

Yeah, working at Stone is a bit of a conflict would you not think? Sorry, it's just impossible to be subjective while under the thumb of that business. Not to mention there are some obvious hard hitting stories out there that are not being published by anyone. Come on SDSU interns!