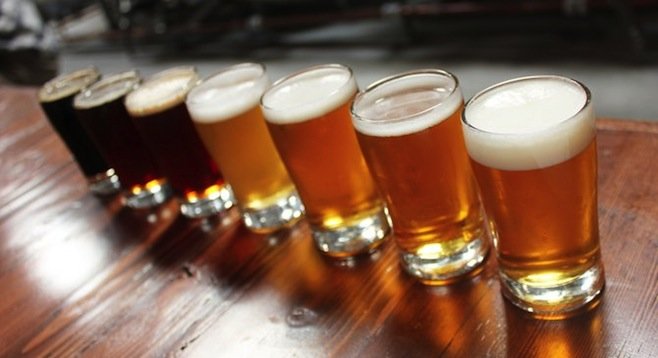 Kicking off the year in review with beery betterment

Last week, I shared my opinion that Saint Archer Brewery just may be the most improved brewing company in San Diego over the last year. That assessment led me to the idea that I should share the rest of my most-improved list with readers. And, as I prepared to do so, I thought it’d be an even better idea to go a step further and put a pretty bow on 2013 by spending this week sharing posts that summarize the performance of numerous brewing companies in different categories through the past 12 months. So, join me as we review those getting better at what they’re doing, then tune back in the rest of the week for more recaps on the local year in beer.

Saint Archer Brewery: When they opened, the beer wasn’t bad…just way too plain for an operation backed by big names that had plenty of financial backing and great brewers running the show behind the brightly lit scenes. The company has since switched brewmasters, going with Pizza Port standout Yiga Miyashiro and, in the process reuniting him with former collaborator Kim Lutz (Maui Brewing Co.), and the beers are all the better for it. Miyashiro’s American Stout is one of the best, most balanced dark beers in town, and Lutz’s Double India pale ale stands up to any in IPA-saturated San Diego.

Monkey Paw Pub & Brewery: Though it was never broken, the beers have been even better, consistent and adventurous since rookie brewer Cosimo Sorrentino made the jump to the big leagues at this East Village brewpub. Proof comes in the form of a Great American Beer Festival gold medal in the American-style strong pale ale category for Sorrentino’s Bonobos.

Pizza Port Solana Beach: Again, there was nothing wrong with Pizza Port’s original brewpub. It’s been exceptional since opening back in the ‘90’s. But there’s new life and lots of ambition there since Devon Randall (San Diego’s only female head brewer) started tending to the subterranean brewhouse. She, too, nabbed her first GABF medal in less than a year on the job.

Coronado Brewing Company: Since opening a second, larger brewery in the Tecolote Canyon area, CBC’s beers haven’t been as consistent as they were when all the ales were produced on the Crown Island. But it seems they have adjusted to their new digs behind delicious beers like Coronado’s 17th Anniversary IPA and the new bourbon barrel-aged Stupid Stout.

Oceanside Ale Works: It’s always a party at OAW, yet the beers used to be like Mama Gump’s proverbial box of chocolates. But things have gotten lots better since young head brewer Jake Whyte took over and started winning Oceanside’s first brewery numerous awards, including an IPA gold at the San Diego International Beer Festival and a bronze at this year’s GABF.

Helm’s Brewing Company: At first, the only beers worth imbibing at this Kearny Mesa operation were its stouts, but head brewer Brian Mitchell is starting to get comfortable with his equipment and shedding light on the lighter side of his company’s family of ales.

Thorn St. Brewery: The first time I visited, it was extremely hard to tell apart the many beers on tap at this North Park communal hub, but nowadays, the individual character brought on by different yeast strains and hop and malt bills is much more apparent.

Prohibition Brewing Company (Honorable Mention): It has yet to translate to good beers all around, but the crew at this north Vista brewpub replaced a somewhat poorly fabricated brewery with a new system from local outfit Premiere Stainless. It’s a big upgrade that shows an effort in line with the company’s artisanal ambition.

Prohibition Brewing Company is Vista's best kept secret. The Amazing restaurant serves food that, in my opinion, is unmatched in Vista, and they seem to be proud of the Gold medal they won at the Intentional beer festival at del mar along the People's choice award for Vista's best microbrewery. They are very deserving of a most improved honorable mention for their improvements over the last year and I can't wait to see what they come up with next year. Cheers.