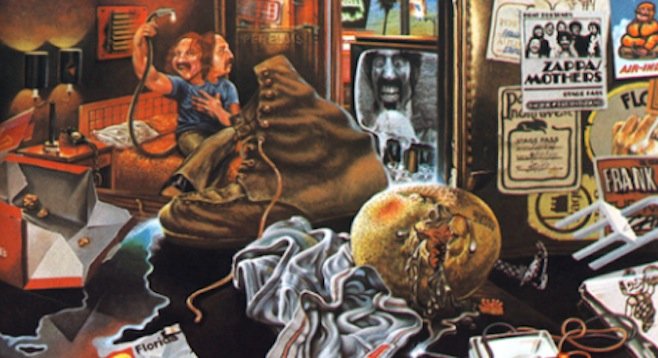 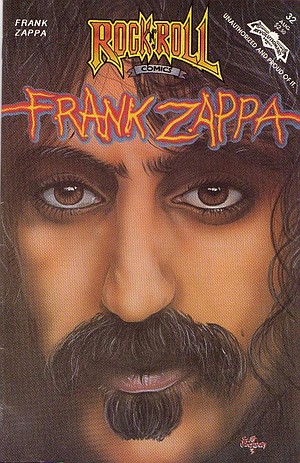 A lot of my friends, including/especially those with musical tastes as refined and open-minded as my own, say they’re baffled by my love for the music of Frank Zappa. However, once a discussion starts revealing the when, how, and what behind their own first exposures to the extensive Zappa catalog (with nearly 100 albums released by the time of his death), I find that my friends simply went too deep, too fast, into the stacks of wax that comprise Zappa’s output.

Some — okay, much— of Zappa’s music requires a gradual introduction by way of his more accessible and recognizable works, a bit of preparation, if you will, in order to warm up to his more adventurous compositions and recorded performances.

Although I’m a longtime Zappaphile (and the author of the pictured comic book bio) with around 80 vinyl albums and I dunno how many CDs making my floorboards sag ever downward toward the basement, my own favorite Zappa releases aren’t necessarily the ones I’d recommend to listeners wanting a taste of his most accessible stuff. Zappa painted outside the lines so much, it was often hard to see the whole picture...

Sooo, with December 4 marking the 20th anniversary of Frank Zappa's death, these are my recommendations, explanations, and related exultations for anyone looking for a crash course in Zappology. 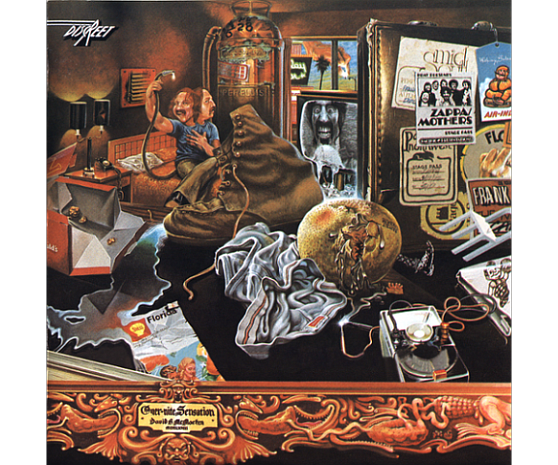 Over-Nite Sensation — Just too damn good for its own good, with most of the '70s radio hits all in one package and Zappa himself taking on most of the vocals for the first time. Released in 1973 and recorded pretty much in tandem with Apostrophe, insidious sing-a-long earworms include “Dirty Love” (“The poodle bites, the poodle chews it….”), “Camarillo Brillo” (she was breeding a dwarf?!), “I’m the Slime” (famously played on Saturday Night Live as green slime oozed from a bigscreen TV), “Dinah-Moe Humm” (concerning one of the best ways ever to earn twenty bucks), and “Montana,” where — whenever driving through — I always keep an eye peeled for dental floss tycoons.

Apostrophe — It was only 1974, but he was already on his 18th album, having gotten actual radio play the previous year with Sensation. You’d be hard pressed not to smile listening to “Don’t Eat the Yellow Snow/ Nanook Rubs It.” Even now, almost 40 years later, every time somebody near me says “Here we are,” I’m compelled to sing out “At St. Alphonzo’s Pancake Breakfast,” and I almost never go to ANY flapjack eatery without stealing the margarine (though I’ve yet to abuse a sausage patty). Great psychedelic jam track with Jack “Cream” Bruce and drummer Jim Gordon on this one too, so take that, damn hippies. Who you jivin’ with that cosmik debris? 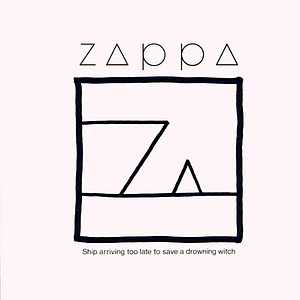 Ship Arriving Too Late to Save a Drowning Witch — What else in 1982 was this much fun to listen to? Flock of Seagulls? It’s easy to forget the massive radio hit “Valley Girl” basically introduced the world to both Steve Vai AND Moon Unit Zappa, while also confusing that selfsame world with a sprawling 12-plus minute instrumental clusterfuck, “Drowning Witch,” evincing influences ranging from Stravinski to TV show themes (Dragnet, etc). What I wouldn’t give to have watched a Gap store full of actual dimbulb Valley teens hearing THAT one blasting out the store speakers for the first time. Plus, this is one of the few album covers that anybody can draw in ten seconds or less, with a result indistinguishable from the actual sleeve.

Joe’s Garage — One of the great — if most cynical — rock-opera suites ever created, with part one predating Pink Floyd’s The Wall by only a few weeks in late '79. Sporting what was pretty much his last gen-you-wine radio hit until “Valley Girl” (a sort-of-prequel called “Catholic Girls” whose fame was all but assured by those whom it pissed off) and the most crackerjack band he ever assembled, Zappa himself cited “Watermelon in Easter Hay” as the best song he ever recorded. Most Zappa aficionados consider his guitar solo on that to be among his very best riffing. Ever.

Inside gatefold of We’re Only In It For the Money

Roxy & Elsewhere — Quite possibly the greatest double-disc live album ever recorded, and one that captures his most offbeat pop-culture phase circa 1973/74, with songs about cheesy horror movies, penguins in bondage, questionable sexual hygiene, and an entire side devoted to a “Be-Bop Tango (of the Old Jazzmen’s Church).” I’m looking forward to the reissue with all three entire shows (for the first time!) with the same tight underpants that used to only strangle my waist before a hot date with a short wait.

We’re Only in it for the Money — Best Sgt Pepper parody ever, though this 1968 gem reveals the Mothers of Invention as true masters of the very artform they so lovingly mock.

Weasels Ripped My Flesh — A dark horse choice from 1970, as Zappa mostly disavowed this album as having been “padded” by live tracks featuring the Mothers, who’d already disbanded before the PREVIOUS Zappa album Burnt Weeny Sandwich. However, there’s not a single day that goes by that wouldn’t be improved by singing along to “My Guitar Wants to Kill Your Mama.” It’s also one of his jazziest albums (with one track dedicated to the jazz pioneer said to have inspired the first Mothers album Freak Out, “Eric Dolphy Memorial Barbecue”). Little Feat mainman Lowell George sings on this one.

Bongo Fury — With costar Captain Beefheart and featuring several live cuts recorded at the Armadillo World Headquarters in Austin TX. These are some of the last tracks done with longtime bandmates like Napoleon Murphy Brock, as well as the first stuff taped with hotshot new drummer (and future Missing Person foil) Terry Bozzio. To this day, I can’t hear or read of either of the Carolinas without humming “Carolina Hard-Core Ecstasy,” nor eat a muffin without singing to myself “Girl, you thought he was a man, but he was a muffin” (air guitar “Wah wah WAHHH!”) –

Just Another Band from L.A. — The unholy 1972 cross-pollination of Turtles hitmakers Howard Kaylan and Mark Volman (renamed, due to contract disputes, Flo and Eddie) and Frank Zappa’s Mothers is highlighted by the side-one feature-length story of “Billy the Mountain,” whose wife Ethyl (a tree growing off of his shoulder) just wanted some damn Howard Johnson’s clams, only to be thwarted by the “fantastic superhero of the current economic slump,” Studebaker Hawk. Recorded in concert, flitting in and out of the mostly-spoken narrative are musical nods to everything from Rudy Vallee to CSNY, Joni Mitchell, the Rolling Stones, Paul Anka (including the theme to Johnny Carson’s Tonight Show), and accordion polka superstar Myron Floren.

You Can’t Do That on Stage Any More — For my final pick, this series featuring master’s choices of great concert cuts always satisfies.

There are plenty of Zappa albums I WOULDN’T recommend, not even to aficionados like myself. For instance, Thingfish baffles me. A lot of it seems to be bizarre just for the same of bizarreness. Just too much to take in - even some classic era stuff eludes me, like Lumpy Gravy. So many Zappaphiles love that and cite it as his best classical longform. Similarly, you couldn’t get me to take another bit out of Burnt Weeny Sandwich for all the creamcheese in Suzy.

I prefer 200 Motels, with Flo and Eddie, which would get me booted the hell outta a lot of Zappa fan clubs. I also like his math rock album Lather, maybe because I saw that tour, much more than any of the Shut Up and Play Your Guitar stuff from the same era, also a blasphemous stance to many.

But that’s the funny thing about music. One man’s weeny sandwich is another man’s sleep dirt. If everybody liked the same thing, there’d never be any more tribute band battles featuring the Beatles VS the Stones.

no mention of his Jazz from Hell album? That is the CD I gave to my mom to turn her into Zappa....

It is a completely different Zappa and shows how he was the master of music composition and a true genius.

Jazz From Hell is an excellent recommendation! If I was preaching the Zappa gospel to a jazz fan, that one and Weasels Ripped My Flesh would be excellent -- and accessible -- primers.

It's been interesting reading Facebook comments with suggestions from others on what I could/should have included. One Size Fits All is a solid pick - its very title declares its intent to engage, with whatever it takes to keep you spinning that wax. I might have run with that rather than the You Can't Do That on Stage series had I thought about it more, since the Stage sets keep coming out, covering the entire period he performed concerts (mid-60s to late-80s) -

My problem with Thingfish is mainly too much spoken word, and much of that read with irritating arch-ness. I suspect it purposefully annoys, and that's not what I put on music for --