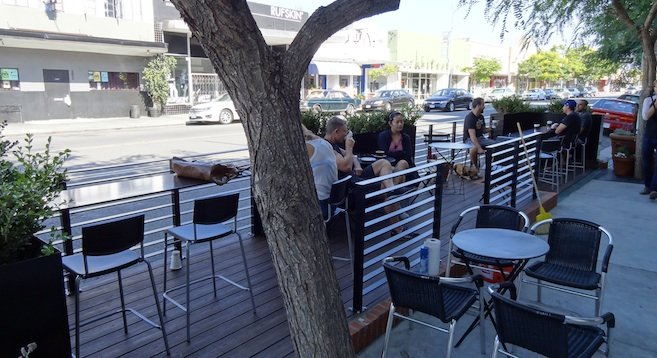 The city's first parklet was officially dedicated August 23, at 3933 30th Street in North Park. It's in front of Caffé Calabria, which paid for construction and will do all the maintenance. The parklet was a partnership of North Park Main Street, the City of San Diego and the North Park community.

The parklet was paid entirely by Caffé Calabria at a cost of around $40,000, according to owner Arne Holt. While almost finished, Holt said that three custom-made umbrellas are coming from Italy. 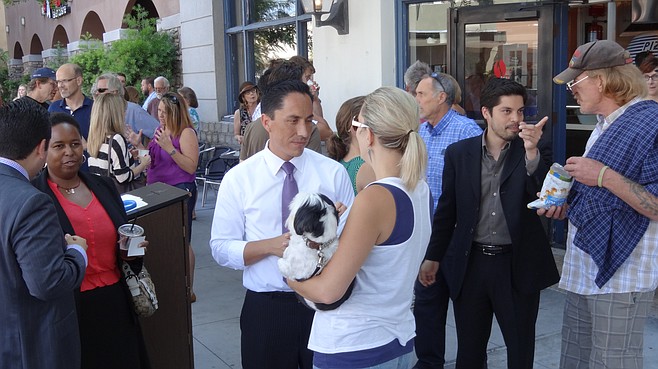 Todd Gloria working the crowd after the parklet's ribbon-cutting ceremony.

City Council President — and soon to be interim Mayor — Todd Gloria spoke at the dedication and said more parklets are coming, in Little Italy, Hillcrest and other neighborhoods. A parklet is created by taking a few parking spaces, and turning them into a mini-park. They generally include small benches or chairs, tables, plants and small trees, and sometimes artworks.

According to Wikipedia, the first official parklet was built in San Francisco in 2010. It was done through that city's “Pavement to Parks Program.” Multiple parklets have been added throughout San Francisco, in Los Angeles, and in many other cities.

Mixed feelings... It's nice and all... but it was already so hard to park there.

And in general, I'm for doing everything the opposite from SF. : )

I like the idea and that no public funds are being used. Parking is always at a premium in the area. However, I don't think 3-4 lost spaces shouldn't make much difference.

The parking places that were swallowed up were green curb spaces, although it is true parking can be tight on 30th. All in all, an interesting experiment. Nicer for the people sitting outside, because it removes the cars parking right by their tables, even though the stream of traffic is still there. Looks pretty good, too.

They only take parking 2 spaces typically, and as mentioned, these were 15 minute parking spaces, and the parklet allows for a lot more people to enjoy this space than 2 cars full of people, or typically 1 person driving a car would. So excited to see this new public space created for the neighborhood and its visitors to enjoy.

Parklets vary based on the following characteristics: Location: Parklets can occupy former parking spaces, street medians, traffic triangles, repurposed travel lanes and parking lots or excess asphalt space at angled or irregular intersections. Surrounding land uses: Commercial or residential Size: From a couple of parking spaces to spaces extending along the length a block, to larger spaces occupying entire parts of a block Shape: Linear, square, rectangular, triangular or irregular Duration: From a few hours (e.g. Ciclovias and Sunday Streets), to one day (Park(ing) Day), to part of the year (during spring and summer), to year-around installations Type of activity: Passive or active recreation 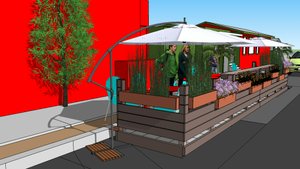 The parklet on Alabama is really nice, and it adds a lot to the neighborhood. 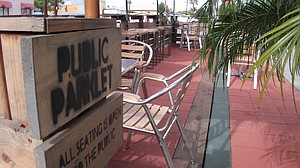 Awesome! Great idea to add more outdoor space in a city that boasts such great weather. Who cares if a few spots were lost, now 10-20 people can enjoy the space instead. Still worried that you can't park in front of the coffee shop, move to North Park and walk your ... over there instead.

I took this photo today showing the custom umbrellas. 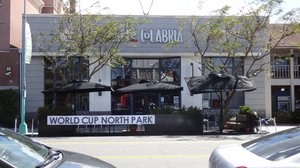