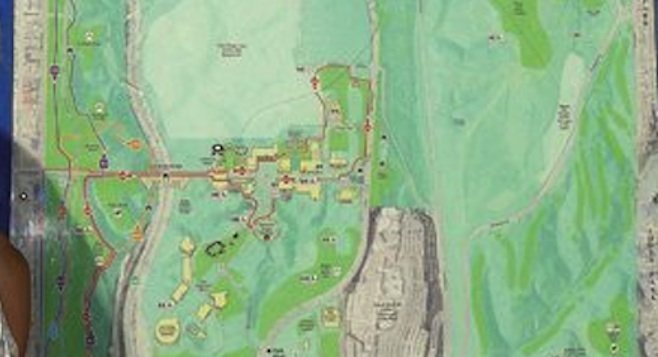 The original Roam-O-Rama column first appeared in the Reader in 1993. The column was authored by guidebook author Jerry Schad. During his lifetime he wrote 16 books. His best known guidebook, Afoot & Afield: San Diego County, was first published in 1986 and was called “The bible of San Diego hiking” by the Los Angeles Times. Schad passed away in September 2011 from kidney cancer. He was 61 years old.

Schad met Peg Reiter, his wife-to-be, in March 2010. Their first date was a hike on Schad’s favorite Balboa Park trail, known as Trail 43, which runs the length of the park from Sixth and Elm to Sixth and Upas. It is a loop that winds its way through the park following tree-lined dirt trails, paved walkways past stands of pines, redwoods, and cypress trees, and through various gardens.

The trail passes through Founders Plaza, honoring the visionaries of Balboa Park, where statues of Alonzo E. Horton, Ephraim W. Morse, and George W. Marston are found. Just south of these is a fourth sculpture of Kate Sessions, considered “the mother of Balboa Park.” In 1892 Sessions began landscaping projects in the new park that would transform the scrub-covered land into the amazing park that it is today with its many gardens and horticultural highlights. 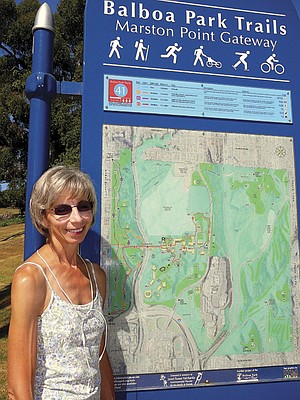 Balboa Park’s Trail 43 has been renamed the Jerry Schad trail. The late Roam-O-Rama columnist and his wife Peg Reiter (insert) walked the trail on their first date.

A year after they met in March 2011, Schad and Reiter were married. Shortly before Schad passed away, he was delighted to learn that Trail 43 would be renamed “The Jerry Schad Memorial Trail” to commemorate where he had met his wife.

The trail can be started at either Sixth and Elm or Sixth and Upas. A map with the Balboa Park trails is at each location. However, only at the Sixth and Elm trailhead, officially called the Marston Point Gateway, is Trail 43 marked as the “Jerry Schad Memorial Trail.” This is the recommended start for the trail. Follow the interior park loop to the east and look for signs that mark Trail 43. At mile 1.43, the trail will be at the corner of Upas and Sixth. From this point, begin the straight shot south back toward the southwest corner of the park, past the sculptures to the Marston Point Gateway. 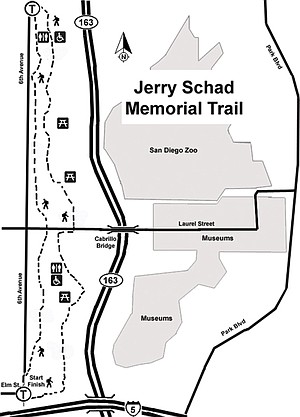 Schad and his wife chose the Friends of Balboa Park as the designated charity for those that wanted to make donations in Jerry’s memory. Funds have been used in support of trail maintenance and other park enhancements, including a new map to all of the trails in Balboa Park that is currently being designed.

The Friends of Balboa Park and the San Diego Park and Recreation Department are sponsoring a “Jerry Schad Trails Maintenance Event” on Saturday, November 3, from 9 a.m. to 1 p.m. with check-in by 8:30 a.m. Those who would like to work on trail maintenance and planting should register by October 26 at friendsofbalboapark.com or call 619-232-2282. Preregistration is required, as the number of volunteers allowed to participate is limited. Light refreshments will be provided.