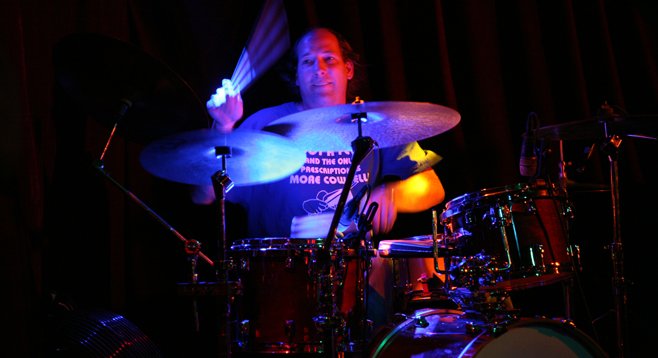 “I’ll probably piss a lot of people off, but I’m willing to put it on the line to get things fixed.” Bill Ray (aka Bill Ray Drums) of Ocean Beach has problems with the condition of the electronic drum kit in the V Lounge at Viejas Casino in Alpine. “I’m not asking for anything other than the drums be maintained.” He claims the equipment has been pounded into submission over years of use and abuse.

“You hit the cymbal pad and nothing happens. It doesn’t ring. It just goes thunk and nobody hears it. There’s not a thing you can do about it,” he says. “It takes the joy out of playing music.”

He explains that the internal electronic triggers work intermittently at best. “Those drums are being played by several bands all day long. They weren’t pro quality to begin with.” Because of that, he says, “you’re not getting a proper representation of the band. You’re getting only what they pipe out to the audience.”

The bad drums have taken a toll on his performance. “I was having a meltdown the other day because I was trying to play a gig on this equipment. I’m passionate about what I do.” He says he’d just as soon truck his analog kit into the V Lounge and use that, but drummers are mandated to use Viejas’ electronic kit without exception.

“I approached the stage manager at Viejas about fixing the drums. I left him a phone message and an email,” he says. “I never heard back.”

“We actually have two complete electronic drum kits for that venue in the casino, the V Lounge,” says Bob Scheid, a spokesman for Viejas. “And we keep them in good repair. I just checked with the sound tech.” I ask if Bill Ray has any support in his drum dissatisfaction. “We’ve had no complaints from other drummers that I’m aware of.”

Bill Ray was one of Ike Turner’s Kings of Rhythm and has appeared on, by his own count, more than 150 albums as a session drummer. His history with Viejas goes back to 1993. That was the year he fell through the stage floor in the Dreamcatcher room.

The problem in Viejas’ V Lounge is larger than busted drums, says Ray. “Nobody in San Diego is stepping up and doing anything about it. Everybody is afraid of making waves and losing their gig.” Then, almost as an afterthought, he says this: “If they want to blackball me, then that’s their prerogative.” For Bill Ray, the ultimate solution is to move on. “I’ve canceled any gigs at the V Lounge and handed them to other players who can handle the casino’s gear.”

Errata- I began playing at Viejas in 1993, it was 1998 that I fell through an open hole in the stage in the DC and tore my right shin open with a piece of metal. Got bandaged up, played the entire night and drove to the ER and got 9 stitches installed. Ended up paying my own medical bill as well. As a result I want nothing from the "V" other than what is coming to me, nothing extraneous expected. If they want me to pay for a coffee I would or bring my own. There' no anger, it's just the way it is for me.

And DG didn't include the line I wanted him to- "How do you get a musician to complain? Give him a gig."

Well I'm glad to hear that things were/are fixed. For the record, I've spent my own dime doing things like replacing the heads on the kit at Club M. I'm all about keeping the gear in good order and do what I can to make that happen. If I had parts for electronic kits I'd be fixing what I could.

Also one thing to keep in mind is that the casinos have added these instruments to their gear list and as an instrumentalist who plays them, I've read the manuals and learned how to work these things. 99% of the drummers who use them do not. I even have a CF card with my kits that I've been maintaining for years and they work on every kit in town except the V-Lounge (Those drums are TD-9 model (mid-level) while the rest of the casinos use the TD-20 (pro level) drums). I've done my homework and could even be considered a specialist on the platform.

I find it hard to believe that "no one has complained" because when this was all brewing there were many who were in complete agreement with me. I'm not going to name names but there's been a pretty good level of support.

Anyhow, the tenor of this article makes me sound more than a bit stand-offish when it's really a proactive stance I'd like to portray here. If the drums are working now then great, glad to hear it. Not trying to stir anyone up here, just trying to get some better conditions for those who have to use these drums. The level of professionalism that is expected from us should be met with a sense of congruence all across the board. There are no attacks from me and I'm sorry that it had to come this far to even get a reasonable answer. What was I to do? I called, sent emails but got zero response. The silence spoke volumes.

Well here we are.

It needs to be known that Bill Ray is VERY pro-active and not out to bitch and moan. He made the V-drums at Pala Casino very playable this week - the first time in at least a year. He should be paid by the casinos to come out every few months to tweak their kits.

It's pretty much a given that cover bands are expendable - caliber of musicianship or the seriousness of the players matters little to management in bars and casinos. Not that good and serious players aren't noticed and appreciated by staff and management - they often are, and it makes playing that much more rewarding. But this is secondary to other priorities that clubs have. This is fine - none of us really expect more.

But, spending a lifetime building and mastering a musical vocabulary only to have every third or fourth note snuffed out (which is what happens when a drum pad is not working) can be infuriating. Indeed, imagine having a serious conversation with someone but having every third or fourth word you speak muted. It's aggravating, and at times worrying, especially when your parts aren't translating and you feel the need to explain to the other musicians why certain things came out (or didn't come out) the way they did. In a sense, job security could be on the line, and that sucks.

On the funny side, it's hilarious to think what the cameras above casino stages have picked up over the years when drummers get pissed off because their parts aren't translating! Some good footage there!

Here's something that every drummer who uses these drums needs to know. Oftentimes the sound crews don't even know this. If you play an instrument it's incumbent upon you to "keep up" with what will help you perform better.

1.Loosen the clutch of the top hi-hat and let it sit on the bottom hi-hat. * Do NOT touch the hi-hats or the pedal.

And therein lies part of the problem; operator error. They should provide a detailed simple list of instructions on how to make the most of these tools because 90% of the drummers I know do not understand how these things work.

Hey, here's a link to the user manual for the TD-20. However, it's a ton of stuff that will glaze over the eyes of many but it's all there. Download it to your "Smartphone" and keep it handy.

One thing you cannot remedy via settings is a "busted" pad. It must be replaced. But you can "cheat" a little on a dying PD-105 (the snare pad) by reassigning the rim sound with a snare sound so you don't get that annoying "ping" that is synonymous with a rim strike. Just patch the snare sound through and through and it'll strike solid every time.

Any other questions? Double triggering bass drum as in "it is too sensitive?" Gotta go into Trigger&gt;kick the bass pad then dial up the "Threshold" setting. If you click "Lock" on the brain (It's one of the two buttons under the dial control) then you can kinda work on that trigger as you are playing; bump it up and down a little while you're playing and eventually it will feel natural.

Once you dial everything in you'll most likely want to save it so go and dig through your old electronics drawer and find an old CF card under 1gb (newer brains can use those larger ones but the older brains max out at 512mb). Push the card in, select "Card" over on the left then "Save Kit" or whatever the dialogue box says. Now when you go to another casino you can slide the card in and select "card" and "Load" then scroll to the kit you want to load in.

As a courtesy I always make a backup of what's there and leave things like I found them.

CAUTION If you do use your own card at Valley View their brain is set up a bit different and there's a feedback loop that will occur; make sure Bill or any of those guys out therer are aware of your intentions and they'll walk you through getting your kit live. Also, you'll want to save a copy of that Valley View kit.

OK, I hope this helps. Hey if I didn't give a damn I would not be spending all this time trying to get things fixed for us all; we'll see how it all turns out from here.