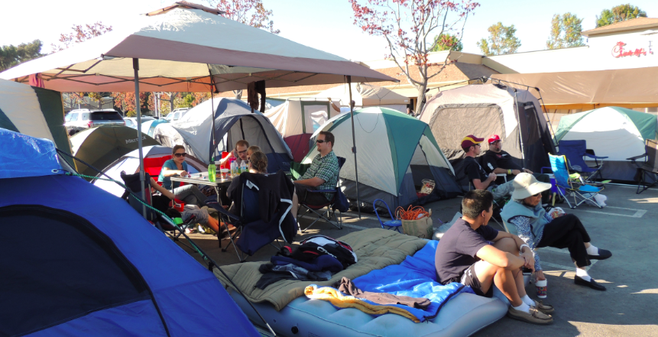 On the morning of November 7, the Royce family from Oceanside lined up outside the Chick-fil-A on El Camino Real in Encinitas. By 10:30 a.m., a tent city had sprung up in the parking lot, everyone participants in Chick-fil-A’s “First 100 Celebration”: the first 100 people in line would receive a year’s supply of meals for recognizing the grand opening of the chain’s seventh restaurant in the county.

Everyone was prepared to camp overnight to receive free food vouchers when the restaurant opened its doors early on November 8.

“They literally leave with 52 coupons for the number-one combo meal — the original Chick-fil-A sandwich, waffle fries, and a drink,” said Kerrie Carter, a marketing event planner with the franchise. Carter is an Oceanside native who resides in North Carolina and travels throughout the country hosting activities at each new restaurant’s parking-lot party. The Encinitas location marks her 99th event. “There’s only three states I haven’t been in,” she said.

Carter said the giveaway celebrations have a lot of followers who travel to attend the campouts. A retired Cypress man was amongst those who waited inside the roped-off area in front of his bed-ready cot while relaxing in a lawn chair next to his three friends. He admitted it was his 30th grand opening, although he was camera-shy and didn’t want to give his name.

Some campers were happy to talk, as a festive energy filled the air. A football was being tossed by several people in one corner, hands of cards surrounded a table on the opposite end, and one woman knitted while another read a book. Laptop keys clicked at the patio tables; Chick-fil-A provided Wi-Fi for its guests. The restaurant also fed breakfast, lunch, and dinner to the campers, and played games and awarded prizes.

The Royce family waits for grand-opening event, following updates online. It’s Sherri Royce’s third Chick-fil-A campout, her 18-year-old son’s second, and the first one for Marvin, her husband. They would be leaving with 156 free meals.

The new Chick-fil-A was originally a drive-through bank, and the $1 million construction of the 3100 square-foot eatery brought 75 new jobs to the area, according to a spokeswoman.

Two other Chick-fil-A locations opened doors in California on November 8: Westminster, in Orange County; and Walnut Creek, outside of San Francisco.

I wondered what all the tents were for. Thanks for being there to cover it. It used to be a Baja Fresh, not a bank. They tore it completely down and stated over again. Nothing says good chicken like an O'Rielly Auto Parts (larger building attached to the C-F-A building). Am I the only one that doesn't get the hub-bub over C-F-A? The few times I've tried it, it just doesn't spin my spurs.