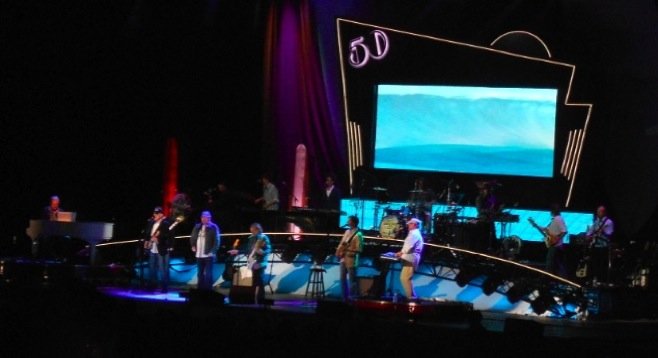 The Beach Boys reunited for a 50th Anniversary Tour that stopped on a brisk and breezy May evening at Cricket Amphitheatre in Chula Vista. But the chill wind could not take away from the "good vibrations" that ensued when the band brought back musical memories and put on a show that charmed the all-ages audience.

Foster the People, a buzz band with a couple of catchy, Beach Boys–style radio hits (“Pumped Up Kicks,” “Houdini”) opened the show and had the teen girls screaming for lead singer Mark Foster.

The Beach Boys took the stage with a full backing band and rolled through their nostalgic catalog: "Do It Again," "Surfin Safari," and "dedicated to the ladies in the audience — ‘Surfer Girl.’" Al Jardine sang "Then I Kissed Her," and a cover of Frankie Lymon's "Why Do Fools Fall in Love?" brought some doo-wop to the stage.

After a brief intermission, during which they screened a video tribute to Dennis and Carl Wilson, Foster the People joined the Beach Boys onstage to play "Wouldn't It Be Nice." The new Beach Boys single, "That's Why God Made the Radio," received an enthusiastic response, and then the band closed out their crisp production with "Surfin’ USA."