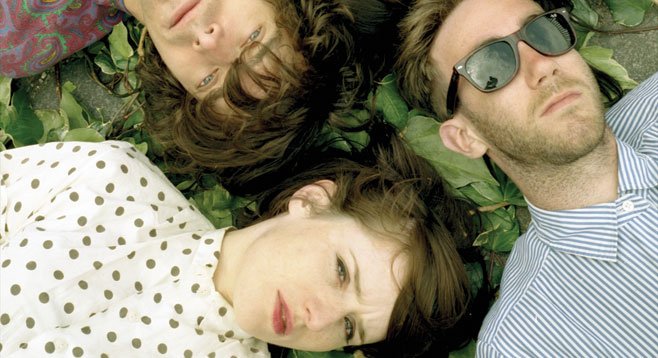 Veronica Falls is a London band whose debut single is a ghost story called “Found Love in a Graveyard.” On their first full-length release, they also feature songs titled “Misery,” “Bad Feeling,” and “Beachy Head,” which is named after a famous English suicide spot. But before you decide this is a goth band, take a listen. The songs are all scrappy, jangly guitars, peppy drums, co-ed vocal harmonies, and deep reverb. In short, despite a fondness for minor keys and macabre lyrics, Veronica Falls is rooted in the tradition of ’80s and ’90s indie pop such as the Vaselines, the Wedding Present, Beat Happening, etc.

We sometimes describe indie pop as “twee,” but that doesn’t mean that these bands can only make childlike music. Far from it. Much of the most interesting indie pop mixes the subversive subject matter of post-punk rock (sex, drugs, death, criticism of religion) with the melody and song structure of family-friendly pop. Thus, you have songs such as the Pains of Being Pure at Heart’s “A Teenager in Love,” which is actually about a teenager “in love with Christ and heroin.”

A lot of bands are mining the legacy of indie pop these days (many of them, such as Veronica Falls and the Pains of Being Pure at Heart, are signed to the long-running Berkeley label Slumberland Records), and it’s easy to dismiss them as revivalists. But Veronica Falls puts its own stamp — and its own talent for great vocal arrangements — on a familiar style. Their morbid songs prove that indie pop still has a lot of life in it.